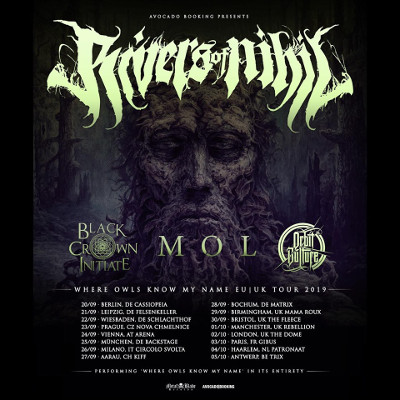 Rivers Of Nihil at The Dome

With 2018’s Where Owls Know My Name, North America’s Rivers of Nihil made the landmark album of their career with a progressive death metal homerun – reminiscent of Opeth’s early 2000s’ output with their own saxophone-tinged character. Their subsequent tour then had been more like a victory lap, with a promising band finally reaching their potential. With a stacked supporting cast, they made their London debut of the album in full to a sold-out Tufnell Park Dome. Unfortunately, the depth charged brutality of opener Orbit Culture was not brutal enough for Southern Rail – who proved to be the most visceral and savage of them all with severe delays meaning this reviewer only made it in time for Denmark’s blackgaze heroes MØL.

MØL, off the back of their monolithic debut Jord, are giant killers. Since they first arrived in the UK supporting Svalbard, they have continued to play support to some of the most colossal live bands in the underground – and they have always come out on top with little more then a slingshot and a lot of heavy rocks. Lead, Kim Song Sternkopf, is a transcendental alchemist, transmuting aggressive power into an emotional catharsis of companionship and vulnerability. Commanding, and destroying his mic stand like a mythical sword – before moving deftly into the crowd to allow the intensity of his screams to match the intensity of his eyes. Kim takes the focal point, so the band can concentrate on creating intricate soundscapes forged with anthemic riffs to create an improbably amount of texture in such a short amount of time. It can’t be long now before MØL graduate to headliner status, but until that time they are likely to continue salting the earth of whoever they support next.

North America’s Black Crown Initiate had the unfortunate task of following the effortless MØL by firing on all cylinders. With lots of crowd interaction, and with energy to spare, they play through a set that on any other day would be triumphant – but they suffer greatly from being sandwiched between two stellar bands on world-beating form. Their brand of technical death metal is a fun crowd-pleaser, but it’s hard not to see them as an example of why the mutations of originality have garnered such praise for their peers. Black Crown Initiate play a good example of an extremely well trodden blueprint. The polish on display was admirable, and the crowd was as receptive as they could have hoped, but they lacked the spark required to really hold their own in the memory after they left the stage. With what came before and after, however, its hard not to feel like the deck was stacked against them.

Starting with the announcement that they were a member down, Rivers of Nihil caused a slight panic. Their critical darling Where Owls Know My Name, is a sprawling epic with rooted textures and melodies hidden in the undergrowth; and the idea of them performing without any one element of that band was cause for concern. But against the worst of it, and seemingly spurred on by the challenge, they pushed through to play one of the best death metal sets of the year.

With a crowd won over before the first note, it took only the second song of groove-laden album highlight ‘The Silent Life’ to set the frenzied pace of the night, with vocalist Jake Dieffenbach arriving like a John Woo assassin to orchestrate a clinical murder of the crowd. The songs flowed like liquid through the space, with anthems breathing healthily through the famously spotty sound of The Dome. Rivers of Nihil are a band that are incredibly serious about creating colossal songs, but there is a celebratory humour that emanates from their set – and a confidence to match which allows them to keep the audience very happily in the palm of their hand. It’s often difficult to maintain interest with a full album rendition, after all by its very nature you lose the element of surprise, but the strength of the opening salvo forged a bond between the audience and band that was to last. And that bond was forged in brass. . .because he cometh. . . the Sax Man cometh.

There is a lot of mystery about the Sax Man. Who is the Sax Man? What is the Sax Man? Why is the Sax Man? But these questions, in the end, are academic. The Sax Man’s only task in this realm is to sax, after which he will fade into the ether – awaiting the next time his sax is needed. Where Owls Know My Name is filled with the stuff, and as such he is willed into this world to take the stage. Every time he arrives the room is filled with an audible reverie, as he showboats and performs admirable 80s’ sax almost to steal the stage. It’s emblematic of the entire performance, as a band with an absolute powerhouse of an album behind them does not allow their new prestige to muddy their dedication to entertaining an audience with a wink and a smile. These segments of pop-infused fun break up each brutal or technical section to allow the set to breath – and they work just as well in a live setting to romanticize the more explorative progressive sections.

The evening then was the celebration of a loved band reaching new heights, with visibly high expectations being smashed asunder by a pitch-perfect rendition of a tremendously accomplished album. A fun encore of new material is warmly received, but it’s clear that Rivers of Nihil have reached a different level now that they’ve opened themselves up to more progressive avenues. We can only hope that they continue on the path they have set now, using these few years as a springboard to build upon their magnum opus. They’ve certainly earned all the good will in the world.