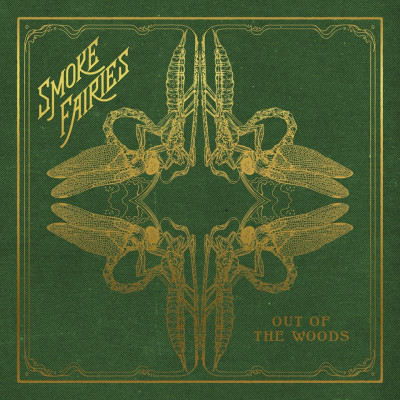 Out of the Woods / Disconnect by Smoke Fairies

According to my postman, my Safe Place is under my doormat. For many reasons, I beg to differ. Most recently, because this new 7” from the Smoke Fairies was secreted in that very spot unbeknownst to me until after I’d stamped and wiped my feet on said mat before entering my flat and discovering the “you have a parcel” card on the other side of the door. There’s probably a metaphor to be gained from all of this, but never let it be said that Katherine Blamire and Jessica Davies’ output is any less than durable, as thankfully this still plays like a dream.

‘Out of the Woods’ is beautifully-distilled Smoke Fairies. A combined beat and riff that immediately feels right at home in their greater body of work, describing (to my synaesthesia-addled mind anyway) circles of sound in the air. Here though, aided by a mix that pushes every layer forward, their characteristic melancholy is bolstered by a harder edge that is a progression from their more “recent” material (ie, about 5 years ago – they’ve been away a while) and is yet another addition to the myriad other elements to the band’s sound that makes them sound like nobody you’ve heard before by virtue of sounding like lots of things all at the same time, none of which immediately springs to mind. You’re welcome.

The flip finds ‘Disconnect’, another fine slice of can’t-quite-put-my-finger-on-it punchy pastoral post-punk which sounds like it’s going to be a live favourite, again sounding like Katherine and Jessica have spent their time away finding new and interesting ways of adding to their already-impressive canon.

This double A-Side is a herald for the upcoming album Darkness Brings the Wonders Home, something I was already looking forward to prior hearing this, and now January 31st can’t come quick enough. Released as a limited picture 7” (almost even more limited, thanks to the efforts of the Royal Mail and their penchant for gleefully hiding stuff under places where feet tend to go), it’s a definite recommendation to anyone who spots one out in the wild.