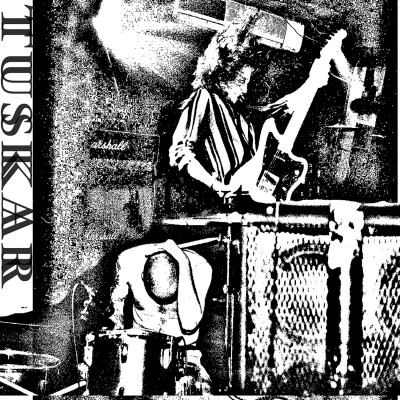 The Monolith Sessions by Tuskar

Slight sense of déjà vu here as I recall reviewing a release by this band this time last year, which like this was a three track EP of sorts, with two out of the three the same. But as the title Monolith Sessions suggests, this is more of a live studio set than the next instalment of Tuskar’s recorded output.

The three track titles ‘The Tide’, ‘Into the Sea’ and ‘Beneath’ together conjure up an oceanic theme, with the word Tuskar in this watery light hinting at narwhals and weird horned sea creatures (unless the online dictionary is right and actually it’s sludgy doom themed around peat-cutting implements?). So, enough of a theme to file under ‘nautikal sludgy doom’ next to German band Ahab perhaps… But if the latter band are the gnawing sombre drama of an 18-month naval voyage, by contrast this release is a furious but brief equinox storm, the sounds evoking the complex swirls and riptides of wild coastal weather.

As the first track starts there’s echoes of a rougher Sleep and their rumbling monotone doom-dirges before turning into something more turbulent. The vocal entry is a foghorn, a lighthouse, a captain yelling into the wind and spray, while the shapes of the riffs and rhythms is constantly shifting. No more so than in ‘Beneath’ where the proverbial bag of spanners thrown down the stairs comparison is apt in evoking the frenetic pace of new ideas, but it’s actually more like a bag of riffs being kicked to bits in the dark. ‘Into the Sea’ is my favourite, moving from the opening energy to a short bit in the middle that I call the Cavern of Twiglets, knobbly stringy columns with emphasis blobs at different heights, before catchiest and most sustained riff of the record, a step pattern like ancient Mesoamerican designs on Yucatan pyramids.

In addition to this record’s brief burst of intensity, the duo’s recent set at Waynestock was full of Dave-Mustaine-hair-swirling energy, more proof that they’re going from strength to strength.