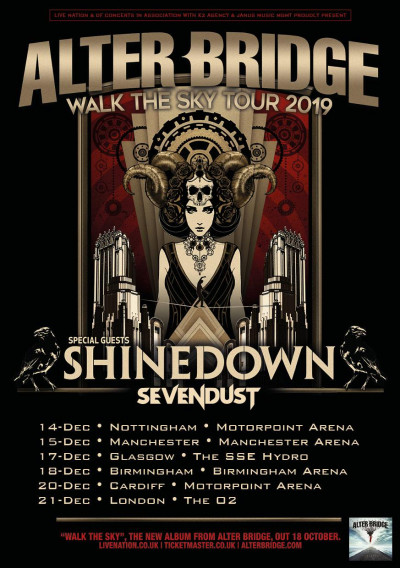 As the decade draws to a close, after much discourse of the decline of rock music, Alter Bridge have proven to be one of the genre’s rare success stories. Forming from the ashes of the often maligned, but phenomenally successful Creed in 2004, Alter Bridge quickly rose to prominence and by the 2010s had become one of the biggest rock bands around; regularly filling the kinds of large venues that elude so many. So, following the release and commercial success of the band’s sixth studio album Walk the Sky in October, Alter Bridge returned to the UK for an arena tour culminating with a performance at London’s O2 Arena. Despite raising a few eyebrows with their appearance at such a high-profile venue when they played there previously in 2016, their reputation as a stadium rock act has seen them return three years later with some stellar support acts to give their London fans an early Christmas present.

British melodic metal act The Raven Age were first up on the bill, providing a last-minute replacement for Sevendust due to the unfortunate hospitalisation of drummer Morgan Rose. Having already supported Alter Bridge guitarist Mark Tremonti’s solo project, The Raven Age were in an ideal position to be able to fill in at short notice. Thankfully, they proved to be more than capable to fit the bill, as they put in a performance of real raw energy to get the crowd engaged and energised. Frontman Matt James was particularly relishing the opportunity, as he dashed about the stage making use of the platforms at either end to make connections with as much of the audience as possible. While much of the crowd were clearly unfamiliar with their music, it was easy to get into and provided a solid half-hour of entertainment while the arena was still filling up.

Next to turn up the energy even further were veteran alt-rockers Shinedown, who had toured with Alter Bridge previously in 2019 and a solid choice to do so again due to the heavy overlap between fans of the two bands. With a stage set-up full of lights, platforms, lead-singer Brent Smith wielding a t-shirt cannon and the general attitude they took to the O2, someone walking into the middle of their performance could have been forgiven for thinking they were watching the headline act. Guitarist Zack Myers and bassist Eric Bass both put in great performances and strutted confidently about the stage while Smith took the lead in orchestrating the crowd participation; this included venturing into the crowd for ‘Enemies’, getting the whole audience up pumping their fists for ‘The Sound of Madness’ and an incredible moment where the venue was lit up with phone lights for ‘Get Up’. Although regular attendees at their gigs may feel as though their stage tricks can get somewhat repetitive, Shinedown undoubtedly know how to get a crowd going and clearly felt incredibly comfortable on the big stage. Underpinning this confidence with a solid musical performance and a slew of strong well-known songs, Shinedown put in a terrific performance that made it feel like we got two gigs for the price of one.

In typical fashion, Alter Bridge provided a much more understated affair than that of Shinedown, which began with the far simpler set-up consisting of a largely empty stage with a backdrop of nine screens across the back of the stage and six across the steeped top. They wasted little time in launching into ‘Wouldn’t You Rather’ from their recent album Walk The Sky before transitioning immediately into ‘Isolation’ which, as one of their faster and heavier songs, got a full-on reaction from the crowd making up for the slightly muted opener. It is within heavier songs like this that a lot of Alter Bridge’s popularity lies, because it allows them to intersect sub-genres and provide a broad appeal across fans of metal, classic rock and alternative music alike. It also injects some energy into a live performance that may well become stale without them; but it also definitely helps that with the release of yet another hugely successful album, Alter Bridge have a lot of high-quality material to fall back on as new songs like ‘Pay No Mind’ and ‘Native Son’ fitting in seamlessly alongside classics like ‘White Knuckles’ and ‘Come to Life’.

If it were ever in doubt before tonight, Alter Bridge used the big platform they had as a further opportunity to consolidate their reputation as the nice guys of rock and roll, even going as far as to give away a signature Tremonti guitar to a lucky fan in the crowd. Although an extreme example, it does epitomise the band’s approach to their fans and demonstrates how unlike archetypal rock stars they are, as they spend most of the gig performing in a reserved fashion with very few frills at all, letting the music do the talking. When you have the talent of a band like Alter Bridge though, this is a definitely a strength. Drummer Scott Phillips was completely consistent throughout on a raised platform behind the rest of the band. Though usually one to take more of a backseat, bassist Brian Marshall was in more of a mood to show off and was given plenty of chance to do so, especially during the ever popular ‘Cry of Achilles’. Tremonti was in scintillating form as always, wowing the crowd with his flawless soloing (and even got the chance to take over lead vocals for ‘Waters Rising’). Meanwhile lead-singer Myles Kennedy’s voice filled the huge venue with ease, and as a more-than competent guitarist he even managed to fit in a couple of solos himself.

Far more important, though, is Alter Bridge’s ability to connect with their fans on an emotional level, even in a massive venue such as the O2. While other bands might be tempted to go for overkill on the spectacle, Alter Bridge find success by doing simple things incredibly well. One of the real highlights of the show was a stunning acoustic performance of ‘In Loving Memory’, which featured just Kennedy and Tremonti before Kennedy took over acoustic duties for the first two verses and choruses of ‘Watch over You’. The intimate side of the performance climaxed with ‘Blackbird’, Kennedy’s tribute to his late friend, which is always guaranteed to get a big reaction from the Alter Bridge faithful. The main set was rounded off with some more old favourites in the form of ‘Open Your Eyes’ and ‘Metalingus’ (the latter featuring a guest performance from Sevendust guitarist John Connolly). They finished the show with a flurry, complete with more light displays and smoke machines, and two post-encore songs in ‘Godspeed’ and ‘Addicted to Pain’. In bringing an end to the show in this more upbeat way, Alter Bridge again showed their rock credentials, but it is with the intimate melodic elements that Alter Bridge truly excel. Their form of introverted hard rock is joy to behold and be a part of in a live setting, and is made possible by their extraordinary musical proficiency and professionalism. As they continue to be one of the most consistent acts in the genre, there will be plenty more great shows like this still to come in the next decade too.