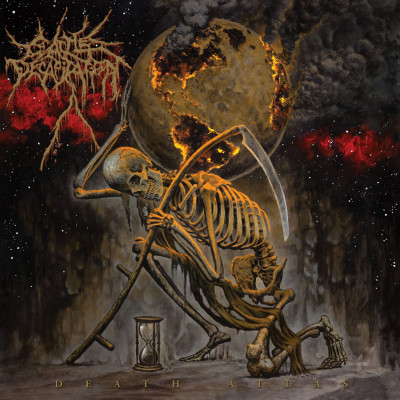 Throughout Cattle Decapitation’s whole career the message has been strong: humanity is what’s wrong with the planet; we are the disease that afflicts the Earth, despite what we convince ourselves. Continual procrastination about the current and very pressing climate emergency coupled with a harmful self-interest have brought us to this state. The band’s modus operandi is disturbing visual depictions on their album covers of humanity as the pathogen and the scourge, and intense, brutal grindcore with impenetrable vocals, pummelling drums and death metal licks. Their trajectory shows them on the ascendant, with recent albums Monolith of Inhumanity and Anthropocene Extinction widely seen as career highs. The refinement of their craft and message reaches a peak with latest release Death Atlas, the message of which is that we are at the end of times. The cover shows the Reaper brought to its knees by the dying world on its back, with the final grains of sand trickling through a timer by its feet.

Death Atlas tells a story, a march towards the end, and the metal is punctuated by atmospheric interludes named ‘The Great Dying’ describing the current era as “the sixth mass extinction” and all manner of environmental catastrophes. With the story comes great pacing: the brutality is still there, and still lies at the core of the band’s sound (they ain’t gone soft), but the range, light and shade, and use of melody is just incredible. Thrown into the mix are a range of vocal styles, from Travis Ryan’s trademark guttural grunts to tortured screams to an emotionally charged ‘cleaner’ style. It all goes together to make one of the most well-crafted, melodic and weirdly accessible extreme metal albums I’ve ever heard. Didn’t think grind/death was your bag? – well, it just might be with Death Atlas!

After gloomy intro ‘Anthropogenic: End Transmission’, the fury of first track ‘The Geocide’ kicks in and almost immediately gives way to a doomy stomp and the charged emotion of the lyrics, “Death always wins, his molten torch forever burns”. There’s anger running through this music, but also a huge amount of regret, grief and a sense of loss as conveyed by the vocals and the way they’re sung. The album continues in this fashion: paying out intensely fast and heavy metal and following up quickly with slower, more melodic passages. At 55 minutes it’s a long album and there’s never a moment to get bored: the variety and pacing ensure that. It takes the listener on a rollercoaster ride that befits the emotions brought on by the subject matter. Other notable tracks are ‘One Day Closer to the End of the World’ and my favourite ‘Bring Back the Plague’. The rabid vocal delivery early on in this song gives way to a catchy (yes, catchy) chorus and melodic hook that stick in the mind long after the song has finished.

The album tells a story, and the final, title track is the pinnacle. In the press coverage for this album Travis Ryan has said the last 20 minutes of this album are the best of the band’s career. The 9 minute ‘Death Atlas’ starts with full-on black metal but soon gives way to more measured clean vocals, “There’s no fear for tomorrow when there’s no trust for today. There’s no ever after, debts have to be paid” followed by an orchestral interlude. The track plays out its last 3 minutes with a haunting, lament-filled outro filled with regret and doomy guitars.

What makes this the best metal album I have heard this year is how well-crafted it is. It uses intensity and brutality to grab the listener’s attention but then adds melody and a frequent change of pace to hold that attention. So much metal has just one speed, and so the variety on this LP is refreshing. Death Atlas is essential listening while you’re pondering the melting of the ice caps. Truly a soundtrack for the end of times.