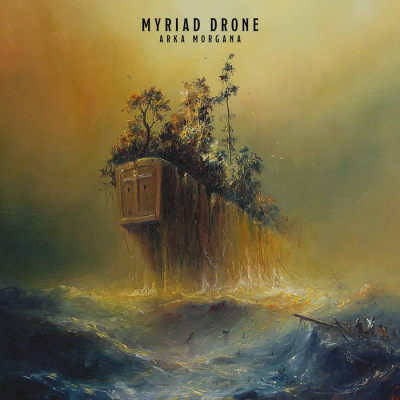 The band’s PR starts with the line ‘Standing out from any genre in the age of over saturation is no easy task’. Which shows a refreshing self-awareness of the current state of post-rock. The Melbourne based four piece Myriad Drone evidently set out to try something a bit different for their album Arka Morgana. The band, which originally started as a solo project by founder and composer Shamus Maximus grew to a four piece with musicians from New Zealand and Italy. They describe themselves as ‘cinematic post-rock’, not really sure if that is referring to their sound or the size of their ambition.

The opening track ‘Time Enough at Last’ certainly starts out in fairly familiar post-rock territory until around the two minute mark where it explodes into a far more expansive affair with a powerful drum track and swirling guitars before dying away to let some ethereal vocals come to the foreground. The track peaks and troughs with some nice use of layered vocal harmonies. ‘Vitreous’ is similar in feel, some chunky riffs add a little harder edge to the track in places.

At this point, the album takes a turn. ‘Arka Morgana’, is a far more fast paced and edgier. A furious drum track makes for a powerful track and metal-tinged guitars again give the track a heavier edge. The use of a Mario Savio speech on the track on ‘Please, Stand by..’ add an uncomfortable, slightly despairing sound to the track. The band again uses vocal harmonies that sit alongside the rest of the track, almost as another instrument, which adds depth and contrast. This is used to stunning effect on the tracks ‘All Roads Lead’ and ‘Atonement’.

The album takes a quieter, more pared back and melodic feel on ‘Disguidance’. The layered vocals are used again here, this time against a lush keyboard and clean guitar. We do get a crescendo here, of sorts, albeit short. Ending the album ‘Unrequited’ similar to the previous track is lush and melodic.

Arka Morgana is an ambitious piece of work and the band should be applauded for trying something a bit different. In places, the band create a stunning and wonderful soundscape. In just under an hour the band range from sparse to melodic to frantic and heavy. The album, however, seems to jump around without much structure. Listened to as a whole piece of work, however, it isn’t really as cohesive as it should be.