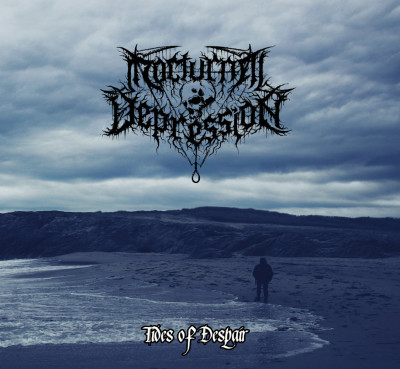 Tides of Despair by Nocturnal Depression

Tides of Despair is the new record from Nocturnal Depression, more than ten albums in from one of the big names in depressive black metal who started out in the mid-2000s. I’ve always liked a bunch of bands in the much-maligned sub-subgenre of DSBM, since in its obscure corners there’s often a far more radical treatment of monotony and repetition than in other areas of underground black metal. But for other bands in the subgenre there’s also a fair amount of over the top emoting and attention-seeking (looking at you Kvarforth) where the oh-so-shocking album covers or cringey song titles aren’t backed up by enough serious extremity in the sounds.

I mention this background since the press release seems acutely conscious of this criticism within the realms of black metal, and it’s at pains (harhar) to claim that the band ‘stand out from all the thousands of cliche DSBM pretenders’. Fair enough then!

So what are Nocturnal Depression got then, more than ten albums and nearly a decade and a half under their belts? Tides of Despair is an album of eight tracks, six metal ones bookended by the expected piano/string/waves/whatever sounds. In fact the first one feels like it’s the intro to the opening track rather than an album intro, since it introduces the classical-ish riff in strings before the heavy-riffing title track version comes in. It sort of is and isn’t trademark DSBM territory… on the one hand its got the mid-paced, simple chord progression done black metally; but then, while atmospheric, it’s more triumphalist, than you’d expect from the morose title. And that’s the case for the rest of the record really too, moving from the monotone and highly extended DSBM tropes to a bit more of a mainstream, later Mayhem, Dark Funeral sort of black metal riffing. Which sort of begs the question of their keenness to be seen as defining the DSBM subgenre rather than being defined by it… The band have changed a bit stylistically, which is fine, but why worry about the subgenre you’re leaving, and certainly why keep the song titles like ‘Farewell Letter’ and ‘Slit my Wrists’, always a far more awkwardly cliched aspect of depressive metal than the actual music ever was.

Anyway, after the thumping opener, ‘Living in a Mass Grave’ has a good muddy-boots-lurch riff and rhythm at first, before exploding into a fast squirling lead guitar section. ‘Solitude and Despair Again’ has a classic picked, ringing sombre progression intro which runs for fully half the over 5 minute running time of the track, bass coming in to presage the pleasing roar of twin screech-wails and torrential guitars. As far as harking back to a classical recipe of relentless mid-paced dirge punctuated with extended wordless gargle-screaming, this is my pick of the bunch. The hissing layers of ‘Slit my Wrists’ amass over a more upbeat riff and speed, while strings/keyboards? adds an introspective gloss to the next track ‘Farewell Letter’ though perhaps that instrumentation feels a bit tacked-on. ‘Muse of Suicide’ has a nice off beat high guitar chiming style which drives on the endless tides of despairish guitars and taunts the more evocative vocal yelps and leaps. Then finally the literal-minded shore sounds on the piano outro ‘Reveries’ brings the record to a close.

Overall a worthwhile addition to the discography for Nocturnal Depression, though for newcomers to the band I’d probably refer them to the earlier touchstone albums Soundtrack, Nostalgia or Four Seasons.