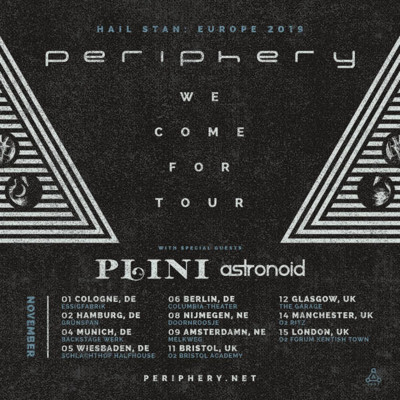 Following the success of their latest album earlier this year, American prog metal icons Periphery graced our shores once again and rounded off their UK tour with a sold-out show at London’s O2 Forum. Periphery IV: Hail Stan, as the album is so amusingly named, was a huge hit among the band’s ever increasing UK fanbase, and for those who had been following them for the past decade of their existence, it was great to see the success that Periphery’s dedication has earned them. Despite their name, their endeavours have made them the closest thing there can be to a household name in the world of progressive metal, and the news that they would be a man down due to family issues for guitarist Mark Holocomb did not dampen the palpable anticipation in Kentish Town this evening.

Opening the show was another band who have garnered a fair amount of excitement, though they are at a different stage in their career. Post-metallers Astronoid released their eponymous second album back in February to heavy praise from several sections of the metal world due to their innovative take on the genre. Although ‘Dream Thrash’ (as they style themselves) sounds like a complete oxymoron, it does actually give a pretty accurate description of what to expect from Astronoid. Perhaps more surprising is that they completely make it work in a live setting when large portions of the crowd are still filing their way into the venue. The heavy guitars and pummelling rhythm section you would expect from a thrash band are there, but are layered in such a way that when combined with Brett Boland’s stunningly soft vocals, they produce a wonderfully atmospheric and hypnotic sound. Fortunately too, the sound set-up, which can sometimes let down support bands, was spot on here and definitely helped showcase what Astronoid are all about. The result was a very warm reaction from the assembled crowd and the band’s reputation rising even further.

The task of following them went to Australian guitar maestro Plini Rossler-Holgate (or Plini, as he and his band are known) whose brand of technical instrumental metal may not be to everyone’s taste; but there was always likely to be a decent amount of overlap at a Periphery concert, and it so proved with loud cheers greeting Plini and his backing band as they kicked off with their first song ‘Cascade’ from his LP Handmade Cities. Whatever your musical preferences, it is impossible to deny the talent not just of Plini himself, but of every member of his band, all of whom are given ample opportunity to display their talents throughout the forty-five minute set.  A rarity occurred on this particular show though in the form of some singing, but it was just a Happy Birthday (which the crowd enthusiastically engaged with) to bassist Simon Grove, complete with a cake being brought on too. In a weird way though, this quirkiness encapsulates what seeing Plini live is like. You won’t find flashy performances or a charismatic frontman here; but you will find someone who is clearly incredibly dedicated to his craft, and a band who are sublime in the execution of their technique – as well as being able to create an intimate atmosphere, even within a larger setting than they would generally be used to.

There aren’t a lot of bands out there who could fill a venue like the Kentish Town Forum, start their set with a 17-minute song and get away with it. Periphery however, are no ordinary band; and if that was not apparent to fans before they bought their ticket, it would soon become so. The four-piece, as they are this evening, are pumped up and in the mood to impress. ‘Reptile’, the aforementioned opener goes down an absolute storm and is taken to new heights thanks to guest appearances from SikTh frontman Mikee Goodman (who appears on the record to perform a spoken word section) as well as a brief return to the stage for Plini and his guitarist Jakub Zytecki. It was an explosive start from which Periphery never once let the momentum slide, moving swiftly into ‘Chvrch Bvrner’, also from Periphery IV. It is incredible how sonically diverse Periphery are, and how they are able to perfectly translate this into a live setting. Lead singer Spencer Sotelo is particularly impressive in this regard as he is able to go from soaring highs to destructive lows seemingly with ease, while also engaging the crowd at every possible moment. At the same time, guitarists Jake Bowen and Misha Mansoor make a formidable pair with Mansoor especially receiving an awful lot of love from the London crowd; while drummer Matt Halpern put in a fantastic display spurring along the rest of the band through wonderfully complex beats and rhythms.

The extraordinary thing about Periphery when they are on form like this  is not so much the undeniable talent of every band member, but the fact that they bring them together in such a way that the total manages to somehow still be greater than the considerable sum of the parts. Stage-wise, Periphery went for a very minimalist approach, with nothing onstage apart from two platforms either side of the drum kit. Lesser acts may end up being dwarfed by such a set up, especially in a larger venue than they had played to before, but Periphery absolutely dominated the stage, striding about it with the sheer confidence their performance merited. Meanwhile, the crowd could not get enough of them, whether they were moshing and crowd surfing to the heavier tracks like ‘Scarlet’ and ‘Psychosphere’ or singing along to the choruses of the more epic sounding songs such as ‘It’s Only Smiles’ and ‘Marigold’ (the latter providing a complete goosebumps moment with Sotelo conducting the crowd through the vocal interlude).

Unlike other prog metal outfits who go for complexity above all else, Periphery make every note count, even during Mansoor’s solos, and set their sound up to fully fill the forum with every riff and chorus. The one and only downside to the show was that it didn’t last longer. As long as many of their songs are, ten in a show is just not enough and left the crowd slightly short-changed (though it is worth saying that they would undoubtedly been clamouring for more however long the set was). After ending their main set with the heaviest number ‘Blood Eagle’, they came back on to finish with the ballad ‘Lune’ from Periphery III: Select Difficulty, which again prompted an atmospheric close to the show. Periphery are on top of their game right now and should feel on top of the world with a performance like that. One of the most exciting and adored progressive outifts of the decade, the future looks even brighter for them, not least because off the back of this show every fan there would go back to see them in a heartbeat.