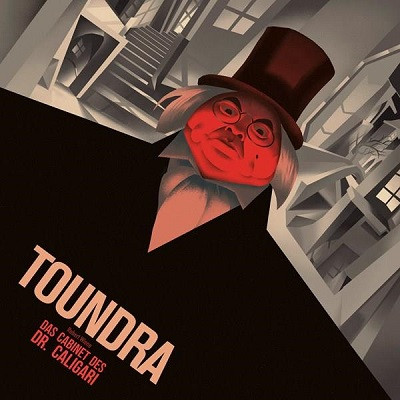 This is probably my first time discovering one of the most interesting bands to come out of Madrid since their formation in 2007, called Toundra. Their music is a crossover between post-rock, alternative, and progressive music as if they combined the three genres by making it a big giant circle to reveal its true power.

They have released five studio albums from 2008 to 2018 with the release of Vortex. And now it’s been two years since they’ve released a new album. This year, they’re challenging the listener to follow their guide into an alternate film score to one of the first psychological horror films in the silent era, The Cabinet of Dr. Caligari (Das Cabinet des Dr. Caligari).

This year marks the 100th anniversary of the film’s release of Robert Weine’s classic that details its twisted architectures as it leans in different angles that are quirky. Plus you have an insane doctor, portrayed by controversial actor Werner Krauss who forces Cesare to commit these horrible crimes before unveiling this unexpected plot twist at the very end.

Released on the InsideOut label, Toundra has really stepped up the ante with Das Cabinet des Dr. Caligari. And the music that is on their sixth studio release, honours Weine’s vision. Plus the band walks into those evil territories that Cesare does as the music follows him into areas you do not want to walk through. Listening to their sixth release, Toundra’s arrangements on here are walking through this challenging maze that the doctor has prescribed Cesare to do its next killings he does every night. And it is chilling and very surreal by walking through the dangers that await Francis to see what the doctor will do next.

I wouldn’t compare Toundra’s music with the aspects of Tool, because that would be too much of a cop-out. But there are some stronger elements from David Bowie’s Berlin trilogy, Manuel Göttsching of Ash Ra Tempel, Klaus Schulze’s Irrlicht, post-punk, new wave, and the score for the 2019 video game, Close to the Sun done by composer Andrea Remini. I won’t go into spoiler detail about how it ends, once you both watch and listen to the film and the album at the same time by synchronising it together.

What Toundra has done is to bring their circle in full. And it is an incredible challenge for me to discover their music. So, I might check out their discography to see what I was missing. However, I will be on the look-out for their next studio release to see and hear what the band will think of next. And if this is your first time discovering the band’s music, be prepared to experience their take of the dangerous world of Das Cabinet des Dr. Caligari.