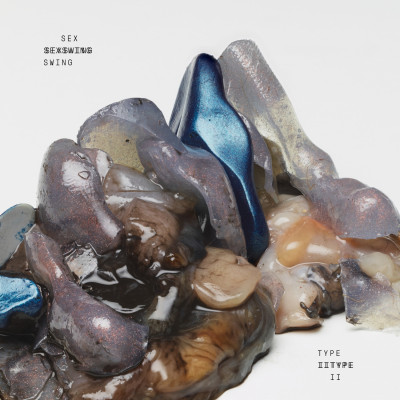 After a warped and abrasive debut, Sex Swing are back with Type II, a collection of new warped and abrasive sonic offerings. Brought to you by the greatest record label in the world, Rocket Recordings. Home of Gnod, Gum Takes Tooth and Pigsx7 amongst others. As far as I’m concerned, there’s a serious drought of brain-bludgeoning psyche music at the moment. Whilst Luminous Bodies, Pigs and Casual Nun have had some fairly heavy releases recently, it seems like most people are kidding themselves with this fucking eyes wide shut jangly shit that seems to avoid rather than attempt social commentary.

I want something ugly and heavy and savage to sink my teeth into; something that bites back with a greater enmity than that which I feel tracking our parasitic media day-to-day in this hellish, (barely) covertly fascist dystopia. Sex Swing seem closer to that than pretty much anything else I’ve heard in the past year. What’s happened to our artists? Are you still pretending everything is fine when everything in our society has been on a downward trajectory since as far as I can remember?

“The void is total”

‘The Passover’ starts off Type II speaking my language; I too communicate via a cerebral process of mangled machinery raining sulphur down on the eardrums and I too share the status of being a permanent resident of the deep recesses of the void. The addition of a chorus is one that will no doubt lead to the band eventually creating something on a whole other level. Although, at times I find the vocals a little too soft spoken for the music. There’s a kind of Evil Blizzard/Hey Colossus vibe to the singing. but it doesn’t seem to really hit me anywhere internally, it’s more a constant state of intrigue and mystique.

The instrumentals are so fucking fat that they have their own gravitational pull though, this record must be an absolute frenzy to watch live. I saw Sex Swing play with The Body and Lightning Bolt a while back and they were fucking great to put it simply. ‘Skimmington Ride’ is a great example of this kind of instrumental barbarity. That drummer is absolutely vicious, definitely the most intense contribution to the band. The synths and guitars are fucking grotesque as well, it’s hard to tell from the processing which is which a lot of the time. There’s a real nauseous aspect to them. I like it.

One track that threw me for a real spin was ‘Betting Shop’, it comes in as such a conventional track that I had to check I was still listening to Sex Swing. It’s also bizarrely euphoric in the middle but, good lord do they sucker you in with that. The ending is, once again, fucking huge. Sex Swing love a slow and gentle start before walloping the listener with every instrument they have. ‘Need Battery’ also follows this loose formula, but stands out as a kind of short harsh noise track which is always good to see being integrated into a more traditional band’s release…especially with production of this caliber. There’s a touch of Wayne Adams on here apparently…although, pretty much everything I’ve written about in the past couple of years has had at least a smidgen of Wayne on it.

‘Garden of Eden – 2000 AD’ closes the album with a big fucking bang, I can firmly say that it instantly became my favourite Sex Swing song. The start is a bit Nine Inch Nails ‘Bad Witch’, but I feel like after Bowie put ‘Blackstar’ out, a lot of music gradually became a bit more like that. Can’t really complain about that – I really like both of those albums, but that’s by the by, these initial six minutes breeze by. I’m all about the last two minutes which I could build a house in and nestle down forever. So fucking wild. Burning Bright (Saxophone On Fire), guitars hammering away, the fucking synth sounds like a tornado made out of the drummer’s playing, it’s absolute fucking madness. Easily the most mind-blowing moment on the whole album and generally, one of the most satisfying endings to an album I’ve heard in a long time.

That’s the kind of relentless, punishing, takes no prisoners music I want to hear. That’s the kind of fucked up, unapologetic, savagery we need from bands in 2020. That’s the sound of people who are paying attention as society crumbles into the jaws of the rich and powerful, unscrupulously mounting their profit as Covid-19 hundreds of thousands of people worldwide and things are only going to get worse. Now is the time for artists to voice the disillusionment, desolation and depression of not just a generation, but an entire society of anyone who is not a fucking billionaire. We need bands like Sex Swing right now, ‘cause they’re telling it like it is…