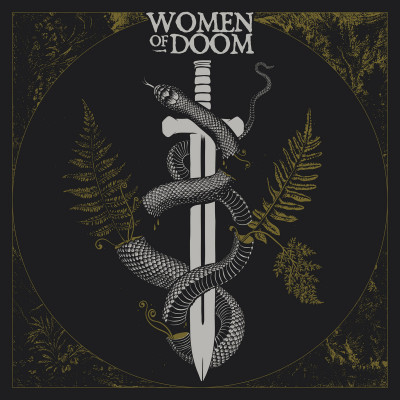 Women of Doom by Various Artists

It’s a directly titled compilation album for a collaborative project that celebrates the deep and expansive impact of female artists in the current heavy music underground scene. Featuring Heavy Temple, The Otolith, Frayle, Deathbell, and female members of Royal Thunder, Year of the Cobra and more, arrived on a joint release by Blues Funeral Recordings and Desert Records with high hopes for this reviewer for hopefully being a far broader church than the term doom and its subsequent sub-genre may form in people’s minds. Not only does this celebrate the fantastic impact women are having in the underground music scene, but this compilation also highlights how diverse their contributions are. It also succeeds in increasing the excitement of what great music is potentially to come-in the future from these artists involved, and for the scene in general.

This year alone there have been some exceptional releases (High Priestess, Frayle, Elephant Tree, King Buffalo) taking metal into wider, thoughtful, and higher plains. This compilation teases wonderfully there will be hopefully a lot more to come on the other side of lockdown. All the songs chosen are exclusive to this compilation which, maybe crudely on my part, could be split into those that provide continuum for the artists respective growing bodies of work to provide good gateways into their music, especially if they are new to a listener. While there are the artists who have used this opportunity to explore something different from their so far trodden paths.

The album, therefore, is a diverse listen which takes the listener into absorbing heaviness but also very unexpectedly quieter moments. In fact, the piano is arguably just as an important instrument on the album as the customary guitar. Several of the songs are piano led with Amy Tung Barrysmith haunting ‘Broken’, The Keening’s sparse piano instrumental ‘A Shadow Covers Your Face’, and one of the two Royal Thunder’s Milny Parsonz cuts which cement the diversity and breadth of depth on offer. What unites the album from being an uneven set of songs however, is how they all effectively and consistently apply a truckload of dark, doomy atmospherics irrelevant on how they approached their song-writing. I admit, it’s an album I have-to be in the right kind of mood to listen to, but along with its slow burner effect, the more I listen the more immersive and rewarding the experience becomes. The songs creep up on you and the introspective doominess wraps itself tightly around oneself.

Taking the opportunity to explore and expand their songwriting into new shapes is Milny Parsonz, who grabs the opportunity with both hands. The first song ‘A Skeleton is Born’ finger picking acoustic guitar provides the framework for Milny, who still applies the emotional weight but sings in softer tones instead of the ferocious attacking style mainly associated with her main band. Her second contribution, the piano led ‘Broke An Arrow’ has Milny arguably deliver one of her greatest vocal performance yet. Both songs feel you are intruding on her very deep personal feelings and are emotional wringers.

Confirming why this year’s album 1692 is one of the year’s exceptional releases, Frayle’s contribution ‘Marrow’ has all the hallmarks of the said record; dark sludgy riffs combined with soft sweeping ethereal vocals which levitate it all to an enthralling level. Besvärjelson provide epic doomy metal that fans of Avartarium will want to check out. While The Otolith’s plucked string and violin sounding instrumentation (or it might possibly have been created by using synths) intertwining with huge doomy power chords, and siren wailing guitar arrangements makes for a well- executed engrossing whole.

Women of Doom demonstrates heavy music is currently seeing a welcome addition of very fine female artists, and on this album’s evidence alone, future music promises to have great depth and will know no boundaries. Doom has never sounded so brightly dark.