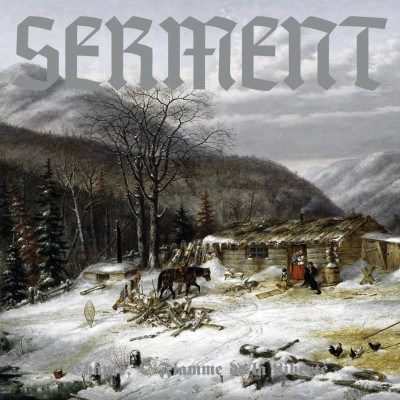 I’ve heard the phrase ‘ambient black metal’ a few times, and had an idea of what it might be, but never actually heard any proper examples in the wild… after all, while the keyboard hummings of dungeon synth and the furious savagery of black metal riffs often coincide in the same album and certainly share visual aesthetics, they’re actually quite different sonic codes. But for the debut album of Serment, the description seems to fit for this perfect, knife-edge balance between muted sweeping blankets of keyboard fog, snowfall drum patter, searing guitar attacks and vocal howls lost in the dark.

The project is by Moribond of Forteresse, and it’s stylistically close to the ancestor band in style, themes and even what looks to be a Cornelius Krieghoff painting of snowbound folkloric life in Quebec on the cover, all most definitely good things. It perhaps veers somewhere between that band’s second and third albums, 2008’s Les Hivers De Notre Époque and 2010’s Par Hauts Bois Et Vastes Plaines, but lets loose a more melodic approach to epic grandiosity. Also, where Forteresse albums are each tightly focused in frostbitten raging austerity, Serment covers a bit more of a range, experimenting with a range of atmospheric approaches while still committing to a singular style.

After a foreboding intro, the second track ‘Sonne, le Glas Funèbre’ is like a rousing of ancient spirits, the wisping keyboards piercing through the skeltering drums and guitars, met finally with hooves clattering through the mist. Next, ‘Par-Delà Collines et Rivières’ begins with a more bittersweet taste, the melancholic melody foregrounded even while the vocals are ragged and torn… the kind of whirling magic you think you might be hearing at the edge of consciousness when alone in a storm, but the intricacies amplified and all encompassing. ‘Flamme Hivernale’ is a bit more furiously paced, with raw vocals bursting out of the chord progressions to assert the main lead for the track, before the transitions become more and more frantic until we emerge into starry weightlessness at the end. ‘Avant que ne Meure la Gloire’ starts less engagingly, but that seems designed in order to build to a shrieking unholy peak, where the keyboard tones are like maddening glints of light in snowblind excess. And with that we’ve wandered into the becalmed world of final track ‘Hymne à la Patrie’, which swirls in nostalgic ancient mood before drifting into nothing but cold wind.

This is no mere side-project but a fully formed epic, ambient black metal record that has the best of all of those terms, drawing on the grandeur and sombre reflection of sweeping atmospherics but always with enough grit and distortion to make this a gripping, biting ride.