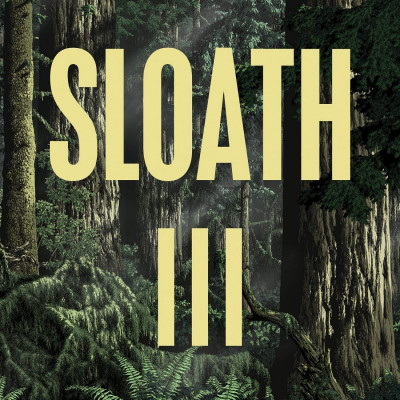 Sloath approach releasing albums as quickly as their name suggests, but happily new record III is worth the wait.

A self-titled first album in 2010, then 2014’s Deep Mountain, and now this imaginatively-titled release have all come out on Black Country institution Riot Season, and aspects of it put me in mind of labelmates Mainliner. Even though they don’t sound so alike, they both share a commitment to the blasted glory of melted amplifier fuzz, yet with deceptive complexity to their hypnotically distorted structures. Stretching the comparison for a few more seconds, then if the Sloath album is Mainliner’s Mellow Out, both three-track wild nostril-flaring sprawlers, then this one correlates a bit more with the Japanese heavy-psychers Revelation Space, each a more unpredictably-shaped, abstracted cousin to the extended gonzo riff fundamentalism of the debuts.

Six tracks mostly between five and eight-and-a-bit minutes each, and there’s a bit of a game of two halves feeling, led especially by, on the A side the brilliant compulsion of trailed track ‘Rewengue’, contrasting with the more becalmed musings of the two longest tracks on the flipside. In the first half we get ‘Big Shift, a sort of holding-chopping riff linked with a brilliant winding, cascading hook and those amazing treated wailing vacant syrupy crackly mumble murmur distant megaphone vocals. Then ‘Rewengue’, really the insistent highlight of the album and one which I keep coming back to, leaning forward into its mesmerising looped orbit. The side is rounded out by ‘Special Force’ which has wound me up because the intro puts me in mind of a particular indigestible, gawky-elbows Black Sabbath riff but I can’t put my finger on exactly which one, which in turn seriously threatens how I see myself as a person. Anyway, the track sets into play a balance between an imposing machinic order of ascending riff structure and the wailing chaos of wild steam-shoots of feedback squirl.

Turning over the imaginary record that I don’t have yet but will definitely pick up, ‘The Piece’ is a percussion-less and slower revolving guitar, um, piece. Strikingly this longest track doesn’t have any drums, suggesting it might feel like noodly filler after a while, but the full length keeps me occupied, as it’s a kind of chiming meditation in harmonic distortion that still seems exploratory and inquisitive rather than lazily single-pointed or unthinking. Then follows the shortest track ‘The Beast’, a fast paced whirl with those moaning murmurs sending warped echo signals over the top of guitar rhythms, creating the sensation of being driven too fast round some sharp corners. Despite this lurching chicanery though, the tone of this side is set by the prior reverie and the next track, another eight-minuter ‘The Whistler’. The closer is again almost a distortion-picked guitar solo, but the sliding between notes in piercing tones put me in mind of bagpipes, a sound also used to great effect by London Celtic black metallers Crom Dubh. Here that tattooic feeling is enhanced by strict, static and restrained drum patterns. Again its surprisingly compelling, the textured noise leaking and oozing around the edges of the staid and structured rhythm, until it all finally realises it’s time to leave and tactfully retreats into silence.

Back again to ‘Rewengue’… the track name seems a weird, arch in-joke of a title, whatever. Since it was the promo track trailed ahead of getting the full release, the first second of sound I heard from the album was the vocal wahhh at the beginning, which had me amusingly and totally misleadingly in mind of Moby’s ooh lordy gospel shout clip vacuum-packed for supermarket shelves, or the siren screech that introduces ‘Firestarter’ by the Prodigy. Odd reference points except for their effectiveness in each song of sonically clearing a space, sounding an alarm for what’s to come. In this case a great lump of genius riff. The riff… the riff… first time round it felt simple and a sort of straightforward trick, I can see what you’re doing there, with the sort of revolving phase rhythm of it, but only a few more revolutions and its burrowed deep into my earbrain… dudurr… dudurr… dudurr… dudurr… dudurr… dudurr… dudurrr-neneneneniiir… No complex tech widdling, its all about the elliptical groove largely on one chord, and just the wholesome scuzz of that distortion sound. And then of course, far more variations to the permutations than what you might assume from the sludgy sound, keeping the attention of a curious mind as well as a headswinging neck. Pleasingly the overall sonic frame is a little more similar to the whacked-out debut than the more classic-rockist follow-up, with that super warm noise coating to the low riffs but at the same time a kind of spaced out distance, the combination coming over like having a head cold but being a-bit-more-than-adequately-painkillered. The real test of a record under review is whether I just compulsively keep turning it up, and this gets extra volume numerous times every time.