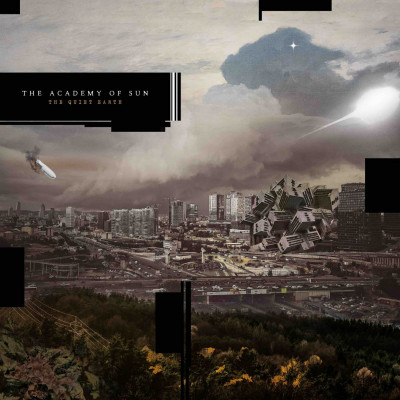 The Quiet Earth by The Academy Of Sun

“In eastern Washington, the territory around the Hanford reservation is promoted as the last stand of original shrub-sage habitat in the Columbia Basin, yet periodically deer and rabbits wander from the preserve and leave radioactive droppings on Richland’s lawns.” – Plutopia: Nuclear Families, Atomic Cities, and the Great Soviet and Plutonium Disasters, Kate Brown.

The latest release from Brighton-based, obsidian-pop specialists The Academy of Sun takes a microscope and a poet’s tongue to the tiny traces of existence left behind following life’s unrelenting fall out. Be it in the melancholy ache of ‘Sky Tourism’, plutonic lust depicted via a toxic thrum in ‘Polestar’, or, as on the title track, the utopia of a world rid of its noisy and obnoxious human inhabitants – “Airships fell from the sky like punctured planets” – the crumbs of this idea are liberally scattered throughout The Quiet Earth.

We hear tell of lives such as that of Elisabeth Bathory. On ‘The Parts That Need Replacing’, the infamous heiress’s name is prised out of black metal talons and relocated (along with her many myths & exploits) into a languid, cavorting and limb-unravelling song of reinvention. A swooning guitar lead cutting through its core seems to have been smuggled out of either Suede’s halls or James Dean Bradfield’s mid-90s songbook. Comparisons which may well come as a surprise to those keeping tabs on influences.

In a recent conversation with The Academy’s main songwriter, Nick Hudson, we lifted the lid on some of the musical forebears that have helped to shape the sound of TAOS (completed by Guy Brice on guitars, Kianna Blue (bass, synths), and the drums of Ash Babbs (who also designed the record’s splendid artwork)). Whilst the touchstones of Coil, Scott Walker, Mr Bungle, and even Danny Elfman (as mentioned in that article), certainly help to feed into the dystopian power pop conjured by this quartet, there seems to be another deep well of influence a-bubbling at the heart of The Quiet Earth. And from that fount we find the coiffured heads of Brit Pop emerging. I’m not suggesting for a mediocre moment that Hudson has plumped for an Oasis-style sub-Beatles run down but we do get glimpses of the artier end of the 90s mainstream indie offerings. The likes of Suede, Manics, and Pulp all appear to be musical reference points. Whether it’s in the aforementioned wending guitar line, the effortlessly cool chorus of ‘Kidnapping An Heiress’ (which also ventures toes into Nick Cave territory), or the Cocker-esque spoken-word delivery of ‘Charboy In The Cinders’, there’s a throwback to the stylish, dark-laced potency that those groups harnessed at the height of their powers.

Throughout TQE the sounds are often found swaying, smokey, mysterious, and with a touch of the Cocteaus to various backing vocals. There are tickled hi-hats and slow-grinding bass lines. Like a Lynchian crotch groove alongside Terminator gunshot percussion, ‘Charboy In The Cinders’ is the sort of track that Bobby Peru would ooze into motel rooms with. Reams of sordid mystery cloak the tales that enrich this record. Pulsing bass and searching ambient synths converge in a distant throb, twisting ‘Rose Devoid Of Form’ into an ear-catching and determined beast replete with overlapping voices, tumultuous drums and those same soothing synths now set to soar.

That’s not to say that other, more expected, influences aren’t perceptible – ‘Don’t Touch The Animals’ is pure Scott Walker, for example – but the net must be drawn much wider in order to pull in the diverse references on display here.

Unbridled guitars send pop shards all over the shop on the penultimate track in a manner reminiscent of Devo covering the Ramones or, indeed, vice versa. And there’s the electronic lilting bombast and twitching pop majesty of ‘Couch Surfer’ with its Kraftwerk-esque backing vocals blended with the propulsive rhythms of The Necessaries.

Then we have future earworm and transgressive pop masterstroke, ’So What, Caravaggio’, which calls to mind Ariel Pink at his most unhinged and infectious. “So what if Caravaggio was a murderer?” A wry question asked with a glinting eye. Do the artist’s endeavours transcend the flawed human creator? In today’s culture of social media pile-ons you can’t help but feel that such a figure’s work would have been resolutely condemned. The gleeful pomp with which this idea is thrust into the ears of the listener only serves to prove the base benefits of art. In this case, rock and roll’s proclivity for unbridled thrills.

But it’s on the third track ‘The House’, however, that the crumbs coalesce into boulders. It is a paternal eulogy for the human traces left on objects inanimate, roused with climbing strings and a rhythm section steeped in tiring emotional battles. Tiny particles of being that lay scattered in sheets of dust are now introduced via this posthumous guided tour around a house crammed full of the markings of an exited life. A weight that cannot be prepared for has settled into the cushions, coats the mantel piece, and adorns the upholstery. These unmeasurable relics survive us all but are thoughtfully catalogued here.

These solar scholars have traipsed far and wide across our dismal planet. Be it by physical or psychogeographic forays into liminal spaces, the vast branches of influence tap insistently on the windows of our consciousness and both embolden and spear the mind. Whether recording deep into the arctic circle or within the confines of a local parish church, The Academy’s sound is expertly choreographed, painstakingly assembled and meticulously curated, resulting in a series of exceptional parts that equate to something far more magnificent than a simple whole.