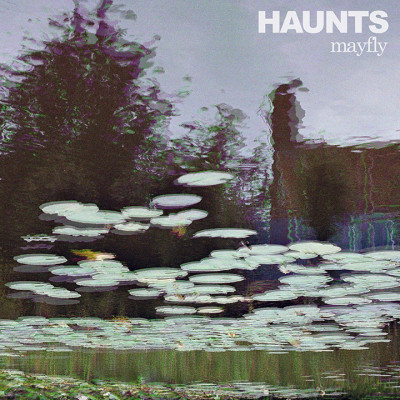 A few years ago, I was privileged enough to be able to review A Lack of Empathy, the debut EP from Kent-based band Haunts. A nifty little curio, their brand of violin-driven post rock was equally as stirring as it was menacing, and set out Haunts as a band to keep an eye on. It is somewhat disappointing therefore that this “debut full length” (it is less than a minute longer than its predecessor) feels like the work of a completely different band.

That’s partly of course because Mayfly largely isn’t made by the same band. Billed as a collective led by Phillip Short and Pete Long, Haunts otherwise feature an ever-changing cast of collaborators and guest musicians. The band added vocals on their 2019 EP Tantalus, and they return here, courtesy of the smoothly soulful voices of France De La Cour and Helen Garrod. They are used sparingly however (only two tracks – ‘Eyes Wide’ and ‘Spoils’ – make use of them), an effective choice that gives the music itself room to shine. The real star here is the saxophone work of Dan Brown, a mournful wail that fades in, depresses the hell out of everyone and fades out again. Haunts have a way of creating beauty from misery, and that talent is on full display here.

The problem is that the band seem to have wilfully curtailed their more expansive tendencies. A Lack of Empathy featured longer evolving compositions, but Mayfly seems to aim for concise and stripped back, edging closer to the realms of naturalistic ambience. At times it works – ‘Spoils’ sparkles with a moody yet laid-back blues ambiance, while ‘Where We Divide’ has a groovy electronic rhythm that evolves into an infectious jazz tune. At other times this attitude leaves the record feeling full of missed opportunities – opener ‘No Pretence’ in particular is guilty of this; a sub-three minute piece, brimming with minimalistic menace, yet ends abruptly just as it feels like it’s really about to get going. There is a similar issue with closer ‘Infinite Further’. This one is longer, clocking in at five and a half minutes, but the shimmering electronic melancholy seems to be just starting when it suddenly fades away. It feels as if the band haven’t quite figured out how to finish their songs, and it’s such a shame when they have such atmospheric promise.

At the other end of the spectrum is ‘Eyes Wide’. There a real sense of place on this one, you can practically taste the acrid smoke clinging to some back-alley bar. At first this clunking hymn enchants, with its twinkling discordant violins and soulful saxophone solo. Yet, the track fails to really push on from there and, as comfortably the longest song on the album, ends up overstaying its welcome somewhat. Likewise, the atmospheric noise of ‘Etheryears’, a shorter track and very evocative but comes across as something of a filler. Acceptable, on a longer record but as Mayfly clocks in at less than half an hour this is somewhat disappointing.

What Haunts excel at is creating a sense of otherworldliness. It is easy to close your eyes and let yourself be dragged into their drizzly, desolate world. That power is more prevalent than ever on Mayfly, as the band revel in an intoxicating, haunting presence. Yet all too often you feel jarringly brought back to reality as the band struggle to take their shimmering soundscapes to a natural conclusion. Haunts’ style suits longer compositions, and unfortunately this leaves Mayfly feeling a little too slight to be truly spectacular.