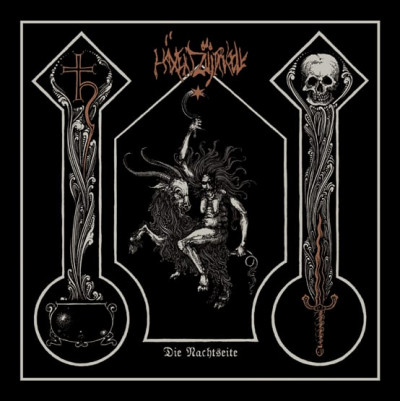 Häxenzijrkell step up with a flinty, fierce debut album for Amor Fati Productions that builds on strong demos and splits to develop a hissing and crackling, doomy black metal style.

Three tracks are set out across 36 minutes with a lack of nonsense. As is familiar from previous releases, creepy German-language dialogue samples introduce the tracks, the first a reverberated female voice mutters about heilige something before a piercing skewer of noise brings in a riff which churns along until punctuated with a descending chain of four notes, a cryptic cascade that’s reminiscent of the opening riff on Mayhem’s ‘Freezing Moon’, which must be deliberate since it’s one of the most iconic series of notes in black metal. But the rhythm is shuffled around so it’s an evocative homage rather than a cheesy ripoff. In any case we march off further into viscous darkness, covered with noisy slime and enjoying the howl-screeches that reach us through the fog, until finally emerging onto a quieter, starlit plain.

Next, ‘Unter sieben Sternen’ has another dirge-riff which gathers mass around it until a shaft of synthy light beams over the pits of lava, and things become more energised and frenetic. One minute its lurching forward, the next trapping the listener in flailing inertia, the track packs a lot of changes into its ten minutes. Finally, ‘Im Labyrinth der Dunkelheit’ is an aptly named wandering quest through room after Escher-like room of abrasive angles and shifting floors, then pitching into a black-hole-stretched dimension of hissing drone whisper.

Definitely black metal in its aesthetic, vocals and approach to a spitting, coruscating distortion, the riffs and structures take a few strides towards a treacly, tar-trailing doom mentality. The cover is a simple but bold and strong design which is immediately striking but also hands out new details over time: cauldron, goat, sickle, star… A fitting visual marker then for the relentless crawling momentum of this record.