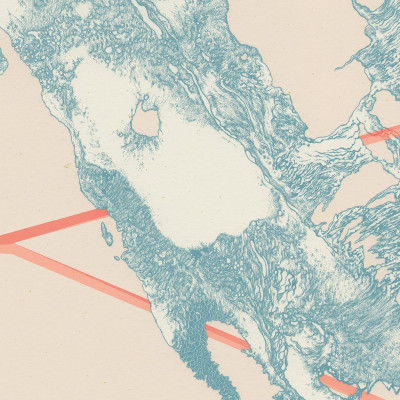 When I first received the mp3s to review Extinct, the new album by Swiss band Convulsif, it began playing and iTunes dutifully signalled that it was an ‘Unknown Genre’, like many of the releases we receive prior to official release. But never has it been more apt. What IS this?

Also, by fault or by artistic motivation, there is also the question of what constitutes the actual album… We received five tracks, which are indeed what are listed as constituting the album ‘proper’. However, when looking at Hummus Records’ website at the vinyl (yes, it is worthy of purchase), there was a bonus seven-inch that contained a track that was not included in the PR download, but that was the ‘single’ released in promotion of the forthcoming album.

So, who knows exactly what Extinct is. A happy discovery, nonetheless, as it fits rather perfectly with the ineffable presentation in which Convulsif thrive. For clarity, I will be reviewing all six tracks.

Extinct opens with the ecstatic ‘Buried Between One’, a track that immediately introduces a listener unfamiliar with Convulsif – as I was – to their hairbrained melting-pot sound. The quartet a traditional rhythm section of bass and drums but then are offset by violin and clarinet, with the latter duo both contributing electronics in the form of droning synths and/or noise. ‘Buried Between One’ is a frenetic musical experience, charged with an animalistic fervour with the end result of something akin to electrocution.

The drums are incredible with a mix of speed similar to what one might experience on a black metal record but with the adept and ever shifting patterns of an extremely accomplished drummer in a jazz quartet. To be fair, one could quite easily say that Maxime Hänsenberger is in a jazz quartet in the form of Convulsif – harsh jazz… Harjz? To further that classification the clarinet on this track sounds like an utterly deranged saxophone – I’ve genuinely never heard a clarinet produce such ungodly yet spirited sounds. It immediately brings to mind John Zorn or Tzadik alumni Kayo Dot at their most unhinged.

As a quick aside, it’s notable that the all four previous Convulsif albums are named simply by Roman numeral – I, II, III and IV – and yet here we are with Extinct. Linear notes make reference to this. Extinct was, for a long time in its gestation period, going to be named V. The band explain that they quite simply could not ignore what was happening in the world around them as they composed and recorded: “Somehow we got from V to […] ruthless men fidgeting with guns and lives [and] to the acute species extinction on this planet right now.”

‘Five Days of Open Bones’ is a very different affair to its forebear, with a menacing light drone and a hypnotic single note bass for its opening minutes, before hushed drums start creating a more definitive texture and quiet, breathy clarinet notes add to the overall soundscape. Loïc Grobéty’s bass slowly develops, drawing the listener in as, almost unnoticed the rest of the band begin to crescendo and layers of noise are slowly introduced into the mix. The track glacially unwraps itself around the eight minute mark, towards a noisy summit, before suddenly fading away to be replaced by an absolutely disorientating psychedelic jam, with the violin and clarinet becoming tools for further noise, adding the heft of jazz freakout to the already dizzying jam. It transitions into a lumbering refrain that through a distorted guitar would be a humongous sludge metal riff but is instead played through a fuzzy clarinet. It’s absolutely bonkers but it sounds so good, ending as it does with some mind-blowing drumming once again and the return of the jazzy freakout noises of before that, again, if played by a traditional rock or metal band, would probably sound somewhat like the spazzy screamo that dominated the US underground in the 90s and turn of the millennium.

We then have two shorter tracks in the form of ‘Surround the Arms of Revolution’ and ‘Feed My Spirit Side by Side’ – the former being three minutes and the latter not even making it to the two minute mark. ‘Surround the Arms of Revolution’ sounds like a slightly more delineated Rock in Opposition influenced track, or perhaps if SWANS had incorporated different strings and some wind instruments into their Greed era. Its disquieting rhythmic sensibilities featuring odd exclamations amongst its melody bathed in Golden Hour light is quite something. ‘Feed My Spirit Side by Side’ is like having a Candiria track stripped right back to just the bass and drums and then allowing a noise artist and orchestra musicians to have a fight on stage using their instruments and recording and mixing together the ensuing mayhem.

Epic track ‘The Axe Will Break’ features more sounds akin to Michael Gira and company, with its rolling opening bass riff reminiscent of SWANS more recent work on To Be Kind and The Glowing Man. It follows a similar pattern to ‘Five Days of Open Bones’ in that it constantly crescendos for the opening half, leaning far more into repetition to produce the hallucinogenic feel that psychedelic rock provides. The final closing minutes of the track and what I will dub ‘official album’ tracks of Extinct are delicious – the exploratory madcap freedom that Acid Mothers Temple have long dealt in. It’s a rich, impassioned finish to a genre-defying, extremely accomplished record.

What more to say? “Bonus track” ‘Torn from the Stone’ is like the malformed child of the shorter two tracks described before – albeit even more loud and vicious, sharing the same kind of intensity one might expect from Melt Banana or early Boredoms. It’s an absolute riot and the music video is easily one of the best I’ve seen in a long time, particularly from the extreme, experimental music scene which typically has to be DIY and with little to no budget. It’s great.  Special mention should also go to the artwork, which I find beautiful and oddly disturbing, which therefore suits Extinct very well.  he artwork was done by none other than Stéfan Thanneur, previously of Chaos Echœs.

Extinct is a surprising, mesmerising album – and another fantastic left-field, off-kilter release from Hummus Records. If you’re willing to go on a wild ride, Convulsif will pay you back and then some with this LP. Recommended for all those with a screw loose.