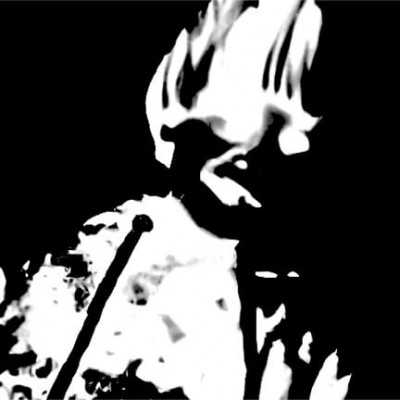 When I took on the review of The Dillinger Escape Plan’s One of Us Is the Killer album, I wanted to challenge myself to see if I could make any sense of the twisted sounds of a band that I had previously never heard of. In amidst the insane tracks I found solace in the rare moments when vocalist Greg Puciato would lean into something more tangible and for want of a better word, tuneful. Following on from their demise, here’s Greg’s debut solo album entitled Child Soldier: Creator of God and once again I am going to challenge myself to try and make sense of what lies therein.

I came late to the Dillinger party and now, in the process of writing this review, I find that Greg also records music as The Black Queen, so I’m going to have to listen to that too. (Bear this in mind when reading the review). It’s an amazing thing to find out that Greg plays everything on this album, except the drums. Produced by Nick Rowe (Lamb of God, Vampire Weekend and Madonna) and released via a label set up with visual artist and TBQ collaborator Jesse Draxler, the album is ultimately a bit crackers. Greg sums it up best himself by saying “the album is a difficult record, and I know 65 minutes is a long time, but it is an album, and it is made to be listened to from front to back, at least once. Then….go ahead and do whatever the fuck you want, listen to whatever songs you want, but for me, at least once, just give it a front to back listen”.

Opening with ‘Heaven of Stone’, a tender acoustic interlude that gives little indication as to what is ahead. You won’t be prepared for ‘Creator of God’, which is chaotic industrial electronica in the vein of Nine Inch Nails on a bad day. As if to test your resolve early doors ‘Fire For Water’ is a manic onslaught of blast beats and downtuned guitars. Full of schizophrenic time signatures this could easily be The Dillinger Escape Plan. The unsettling ‘Deep Set’ features a grinding bass line and string bending riff that creates a warped backdrop for Greg to creep into your head.

So that’s how Greg decided to introduce you to his solo record, uncompromising to say the least. Mercifully things get a little less abrasive with ‘Temporary Object’. With a heavenly vocal over skittery beats and laidback electronica, it’s a hefty nod to 80s electro pop and it’s no bad thing. If anyone can mess with a straightforward synth pop song and turn it inside out it’s Greg as the drums on ‘Fireflies’ seem out of synch with the rest of the track. When it does re-align in the chorus it’s lush and lovely.

Feeling relaxed? Fuck that. We’re about to head into the section of the album that really will push the upper limits of the mixing desk displays. Beginning with ‘Do You Need Me to Remind You?’, a pounding groove of deep bass and complex beats and Greg turns in a mighty fine vocal, because he’s in croon mode, aside from the twisted bridge where things get nasty. By the end of the song he’s in full flight with the throat shredding howls over grinding heavy guitars. ‘Roach Hiss’ is in the vein of Dillinger where it seems as if there are several songs being played at once, it’s near impossible to lock into a groove yet it all seems to fit into place. In the midst of the melee Greg let’s the perpetrator know they can “go fuck yourself!”, perfect bad day music. Album standout track ‘Down When I’m Not’ is a sublime pop metal crossover with a gorgeous swooning guitar/keyboard (?) line that sounds like another song I just can’t pin down. When Greg plays it straight he’s brilliant and this shows the man has an ear for a tune amidst the wanton noise and destruction.

Things then turn to a different tone altogether with the final third of the album. ‘You Know I Do’ is a delicate ballad of floaty guitars and reverbed voices, the song drifts into a lovely shimmery soundscape bringing an element of Depeche Mode into proceedings. ‘Through the Walls’ is a dreamy ballad of gently strummed guitar and ghostly keyboards and piano. The song wanders through some gorgeous meadows as the instrumentation stretches out. On ‘A Pair of Questions’ there is another nod to Depeche Mode with keyboards lilting out a straight-up pop song and Greg easing out a delightful melody in his best Dave Gahan register.

Ethereal keyboards bring a spooky atmospheric to ‘Evacuation’ allowing Greg to soar with a sublime melody before Reznor drops back in with some choppy guitars and a hefty electro beat. I referenced bad Nine Inch Nails earlier in the review, well, this sounds like good Nine Inch Nails as Greg snarls and spits over the menacing groove. Greg is possessed of a great voice and on ‘Heartfree’ he lets go with an impassioned vocal that soars and teeters on the edge of breaking. He covers the full range of styles as the music switches between rock and electronica, becoming two songs (at least!) in one effectively. Actually, it has to be three as the song ends as a tender piano ballad befitting of a bedtime lullaby.

On album closer ‘September City’ a reverbed piano and soothing guitar/keyboards provide the fluffy clouds with Greg floating above it all creating a dreamlike state of bliss. Then a full-on 80s rock guitar solo drops in and you wonder where the song is going to end up. Around the half way mark there’s a squall of feedback signifying and end to the calm as things get noisy with charging riffs and thunderous beats. Greg reminds us all that he used to be the vocalist in a manic rock band before disappearing abruptly.

This album really is something of an oddity, though it’s the sound of a man content with what he is doing artistically. Greg explains “I’m just trying to be the most “me” version of me that I can possibly be…The times in my life when I’ve been depressed or felt severe anxiety and panic, I look back on them now and I realize it’s because I wasn’t being a hundred percent real with my representation of myself. But now that I can do whatever I want, I feel fucking great.” This adds a little perspective to the wide spectrum of sounds and styles covered. Child Soldier: Creator of God is ambitious, weighty, noisy, complex, infuriating and brilliant all at the same time.