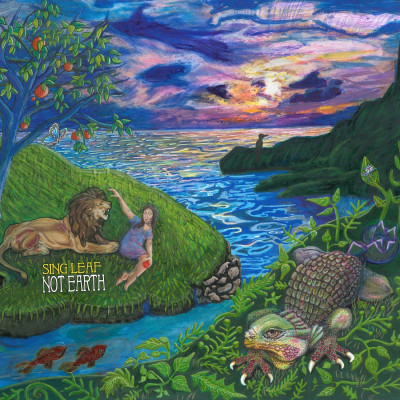 Not Earth by Sing Leaf

Making music that is ‘left-field’ in a way, but still something that practically anybody can listen to and enjoy, sounds like a relatively easy thing to do. You write a catchy melody and just throw in a few elements that actually don’t belong there, Right? Wrong, of course. If there was anything harder to do this is it. Except maybe writing pop that sticks to the standard formulas, but then it doesn’t.

Now, let’s leave pop for another occasion, and let’s talk about Sing Leaf, aka Toronto musician David Como and his latest album Not Earth. But then, maybe we shouldn’t forget pop after all, should we?

With Como, the dilemma about what he has come up here can remain, he probably wants it that way anyway. But, there is no dilemma about one thing – this album is damn enjoyable, for wherever you want to classify it if that is your thing. Still, if you want to do that, you’ll probably have to file it into four to five. Let’s give it a try, weird folk (‘Honeyeater’), folk/pop with a touch of The Beach Boys (‘Forever Green’), Electro (‘Magnetic’) and you can pick your own for the rest.

And yet, it all somehow fits into one cohesive whole. Part of it may lie in the participation of currently one of Toronto’s better musical masterminds in the form of Sandro Perri, but most of it is due to Como’s ability to move around swiftly and combine musical elements that seem to have belonged together from the beginning.

Oh, and something probably has to do with Como’s initial concept for the album as “Disney, sci-fi, alien landscape vision” with mystic Tarot cards and late psych writer Richard Brautigan thrown in for ‘good measure.’ And then, when it all ends in less then forty minutes, brief for the still dominating CD standards, there is only one thing to do – play it over to what have you missed this time around.