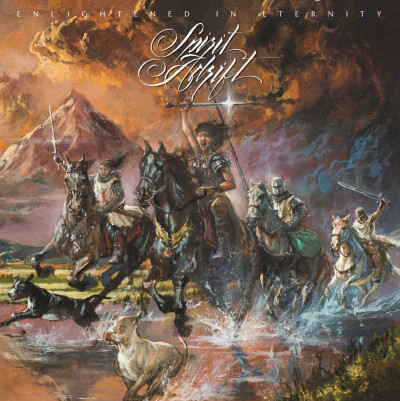 Enlightened in Eternity by Spirit Adrift

Four albums and two EPs in just five years is a damn impressive feat. That is exactly what Spirit Adrift have done this past half decade and Enlightened in Eternity is the latest material to be fired out of the creative melting pot that is Nate Garrett’s brain. Add to the fact that until earlier this year the guy was also in the mercurial death doom band Gatecreeper and it’s difficult to figure out when or if the man ever sleeps! But in 2020 Garrett had the opportunity and time to take stock and decided all of this was too much, and having amicably stepped away from Gatecreeper, thought he would take some time out.

Instead, every time he picked up a guitar, he would excite himself by writing riff upon riff upon riff. Despite being exhausted from the creative process of prior album Divided by Darkness, he proved to himself that the creative pool had certainly not run dry.  Indeed, it was overflowing! And suddenly Garrett found himself unintentionally writing a new Spirit Adrift album – Enlightened in Eternity.

Spirit Adrift’s fourth record is quite a different beast to their prior efforts. Although dealing with a similar sonic palette, the overall feel is one of greater focus and precision. Although the old school doom worship is still present, particularly on closing track ‘Reunited in the Void’, the rest of the album only nods to it occasionally, being far more preoccupied with classic heavy metal. Aside from the aforementioned final song, all the other tracks present are notably more concise. With Marcus Bryant plays drums, the duo have also both clearly made a concerted effort to grow their technical prowess with their instruments. The guitar and bass playing are stronger than ever before, the drums are tighter than previous recordings, and Garrett’s vocals have come on leaps and bounds even when compared to last year’s impressive LP.

Enlightened in Eternity kicks off with ‘Ride into the Light’, a track that sounds like Iron Maiden guested on an AC/DC song. It’s full of both epic grandeur and impetuous frivolity. Mixing heavy chugs with treble-heavy guitar noodling, this immediately gets the head nodding. Interestingly – and rather needed in this difficult times – Garrett’s other major pivot in songwriting is quite how positive this new record is. Previous albums have covered, through Spirit Adrift’s particular aesthetic lens, some pretty difficult emotional times for their main man. And although the same can be said for this new LP, I’m sure, it also appears that Garrett has consciously tried to look at things from a more ‘glass half full’ perspective. This is true of the music too, with far more major chords strewn through this album than previous efforts combined.

‘Astral Levitation’ then comes calling, marching out of your speakers with some serious swagger. Imagine Dio-era Black Sabbath rattling along and then making a smooth transition into the heavy metal bravado of Judas Priest. In this moment, you get the feeling that Garrett and Bryant know that Spirit Adrift are already flying high and that they have many more gears yet to go through in this album and future endeavours. It feels like a band in complete control, totally believing in their own talent and vision, and very much enjoying the experience as it happens. ‘Cosmic Conquest’ carries on this bold, confident thrust. Arena sized riffs and solos abound, becoming instant earworms and despite the larger than life pomposity of the tracks, they never veer into that most worrying of cliff-edge moments for heavy metal; that of becoming cheesy.

If there’s a problem with Enlightened in Eternity, it’s the lack of the really big switches of dynamic that Spirit Adrift had exhibited on previous records. While the new album may be more concise, precise and coherent, it is exactly this which also detracts from unburnished enjoyment. The entire record is undoubtedly a lot of fun to listen to, and the musicianship is absolutely beyond question, but there is far less variation than one has come to expect from the band. Or, rather, the shifting changes across its forty-five minute runtime are far more subtle than before, and while subtle is usually an overwhelmingly good characteristic of songwriting, it perhaps doesn’t work so well for those who worship the stylistics of NWOBHM. ‘Screaming from Beyond’ is a good example of this. On its own, it’s a quality song, but it could also be chopped up and placed in one of the three tracks prior to it, and it would be hard to delineate between them. It’s just missing a little seasoning.

A song that immediately undermines, nay torches, my previous point is ‘Harmony of the Spheres’, a track that stands out head and shoulders beyond its siblings, despite being on an album of extremely impressive songs. Here, Spirit Adrift attack their instruments and vocals in a different way than on the rest of the LP. There’s more venom exhibited on this track; a mightier heft. The drums almost go old-school punk and feature D-beat-downs, while the guitars crunch that bit heavier, so while the riff may be unmistakably classic heavy metal, the sound is closer to some classic 90s metal at times. It’s an exciting track that, if there’s any justice, will be being played in rock and metal bars for years and years to come.

‘Battle High’ suffers a similar fate to ‘Screaming from Beyond’ and is possibly the most forgettable song on Enlightened in Eternity. It may sound very harsh, as it really isn’t a terrible song, but I think the album could bear with it having been cut and not necessarily replaced. It also clearly has the difficult job of following ‘Harmony of the Spheres’, made all the worse by also having another strong, very enjoyable track follow it in the guise of ‘Stronger Than Your Pain’. The latter just has riffs teeming out of it and a particularly strong, robust performance from Bryant on drums.

Spirit Adrift’s newest LP closes on ‘Reunited in the Void’, a track far more reminiscent of the epic songs on their other albums, even reminding one of the 2016 debut, ‘Chained to Oblivion’. Classic doom is on the menu and it’s a fine way to finish another very accomplished album. The vocals on this track are, however, on balance, Garrett’s weakest. The longer held notes stretched across the dramatically different pacing, prove strained at times. However, this is made up for with some creative – and, importantly, very different to what has come before – composition and instrumentation. Synths are weaved into the sound far more than elsewhere and the guitars take on a majestically dark quality, with one riff almost sounding like a rock’n’roll version of Phantom of the Opera. Garrett also works in some folkish Americana as a bridge, which is heart-meltingly gorgeous. I really wish the record faded out to this sound, but instead the guitars begin to crescendo again. The next minute or so is nice, with the folk/country riff becoming electrified, but then for the last two minutes of this eleven minute epic we get some guitar soloing that, for the first time on the record, feels rather superfluous. It’s a slightly frustrating way for such a good record to end.

Overall, Spirit Adrift keep up their unbelievable record of churning out high quality, deeply enjoyable heavy metal records. With Enlightened in Eternity Garrett and Bryant have crafted some of their most condescended songwriting, lifted all the higher with stunning performances from both men. But, in turn, this trimming of the excess and the fat has, at points, cut too deeply, leaving an album that doesn’t twist and turn like their previous marvels have done. One hopes Spirit Adrift don’t streamline themselves into oblivion…

But surely all can be forgiven, since they have gifted us the riotous, pitch perfect song, ‘Harmony of the Spheres’? Yeah, of course. Sure, it can. And, with the way this duo are working, we might get to see how they further evolve with another new record in 2021?!