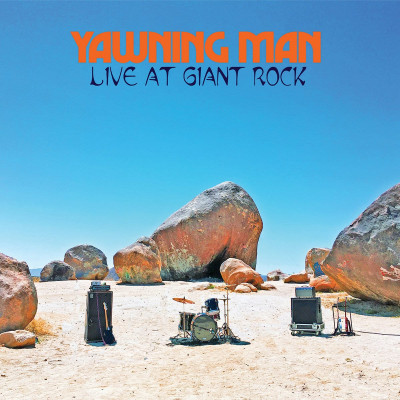 I’ve reviewed recent Yawning Man releases, as well as a show by related band Fatso Jetson, and to be honest every one is a delight given the mythical status of those names to me as a teen Kyuss fan decades ago. But I was extra excited to pick Live at Giant Rock to review, as a live set by a band whose famously laidback and visionary sound has to come out best in the gig setting. And I knew this would be great as soon as I saw that the first track reaches nearly fifteen minutes in length. Previous studio recordings and even the early demos Pot Head and Rock Formations featured tracks of around five minutes, beautifully calm and resonant vignettes rather than far out endless jams. The other tracks on this album don’t run as long, but it’s wonderful to hear a relaxed, expansive, unhurried unfolding of these pieces.

Important to say given the various dead ends of ‘stoner rock’, this is not interminable pentatonic guitar widdling, but instead it’s a careful manipulation of angles and restrained shards that refract and recycle onwards. This isn’t the usual set packed with hits, at least as far as the track titles go, but it’s unmistakably Yawning Man, Bill Stinson’s steady unfussy drumming underpinning Mario Lalli’s lean but atmospherically roving bass explorations and Gary Arce’s sky-reaching chiming guitar. I won’t even bother getting into the different tracks as it’s just a rolling, beautifully measured out fifty minutes of instrumental desert road jam, a mixture of well-honed sonic telepathy between bandmembers and an airy, drifting cool creativity that grows organically out of straightforward ingredients put together with both work and inspiration. Laidback but far from lazy, its deceptively intricate but the easiest thing in the world to appreciate.

There’s a DVD version coming out alongside CD and LP, and though I’m not normally that into watching concert videos, actually this might be the first one I purchase. It was recorded in May 2020, so well into the live music catastrophe caused by the pandemic, and so takes place without an audience, not in a glum empty venue or rehearsal space but under huge skies in the Southern California desert, coming back full circle to the kinds of rocks they put on the cover of their first album. As the title suggests, there’s a giant rock, and the setting matches the band, unfussy and solid but spectacular nonetheless. The set-up makes reference to the mythical generator parties of desertscene lore, as well as a justified nod to Pink Floyd at Pompeii, not just in the expansive setting but perhaps in echoes of that album’s track “Echoes” in the unhurried but insistent groove set up here.

There’s chomps taken out of the cymbals and dust around the guitar pedals as they keep on riffing, with absolutely nothing more needed than drone camera shots of the desert and the band’s extraordinary musicality to make this absorbing from start to finish. Sometimes there’s a few jiggles of the camera or some light-touch messing around with visual effects, which are maybe a bit kooky but ultimately don’t detract from the film’s does-what-its-says-on-the-tin charms. At one point a butterfly flutters past Gary Arce’s nose, as if acknowledge the elegant lightness of touch from the sounds coming out of the amps and bouncing off the rocks and sky until finally we fade out to black watching the generator humming to itself. Even these paragraphs seem superfluous, unnecessary waffle and over-complication around something almost crystalline in simplicity. Seriously, all you need to know is: band play excellent, excellent music in the desert. Stunning.