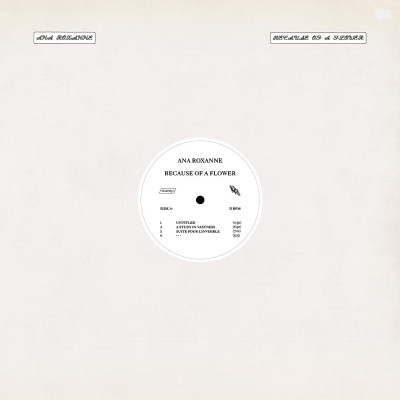 Because of a Flower by Ana Roxanne

There’s always an uncertain element of certainty when a new release from the Kranky label comes your way. You are certain that you will be faced with an excellent post-rock, ambient set. But, on the other hand, you are uncertain what direction it will take and what new twist is thrown in by the artist in question.

Still, if you are unfamiliar with the Los Angeles artist Ana Roxanne, and it would be no wonder since her only previous release came last year (2019), you still wouldn’t know what to expect from Because of a Flower, her second and latest. The moment the brief untitled intro comes in, you realize two things – it is going to be another ride of Ambiental, post-rock (or however you want to label it) beauty that is at the same time somehow familiar (the usual Kranky excellence embodied in the likes of Labradford, Stars of the Lid, Pan American), but somehow slightly removed and looked at from a very personal and specific angle.

That angle is particularly present in the compositions like ‘Camille,’ where Roxanne adds to the stage a good old Seventies-style beatbox, organ, wordless background singing, and spoken words in French. Oh, and every other of the seven compositions here. You can freely call them that. It probably has something to do that Roxanne took her time to meticulously think out each of them – it took her five years to come up with the final versions here. As she explains, the whole process began with “a drone element and a mood, then intuiting melody, syllables, and lyrics incrementally, like sacred shapes materializing from the mist.”

The only uncertainty Because of a Flower leaves you with, in the end, is a question – can Ana Roxanne come up again with another album of such excellence and beauty.