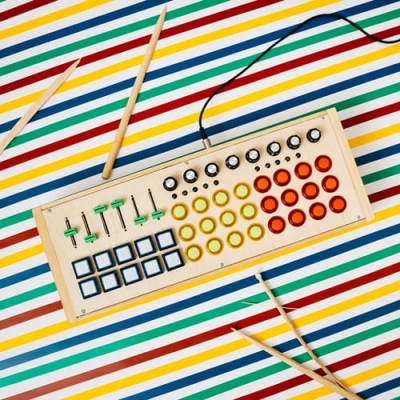 Bosh! Just in time for Bandcamp Friday, a five track rave tape of wow and clatter from Big Lad. One of the gigs I was looking forward to when the covid cage came down in March, Big Lad live are a ridiculous and exhilarating assault. Right now, as we sink into late autumn gloom and lockdown pt 2 this EP can’t help but carry a strong nostalgic taste of before. When we could all be in the same small space dancing and yelling and sweating and drinking with this demented noise shaking our bones. Hand Tools is a fast and slightly queasy flashback to all that. Warming and medicinal, like a shot of Jäger.

I actually saw them just this time last year at Brave Exhibitions, but it feels a lot, lot, longer ago. It’s hardly as if they’ve been slouches. Henri has been playing in Reciprocate and Wayne in Petbrick. The lead tune ‘Monster Jam’ is a prime slice of manic Big Lad business. Ferocious beats, swarming synth noise and a series of overloading detonations that recall The Prodigy. The psychedelic demolition derby video (by Gareth Thomas of USA Nails) is a pile up of fast cuts and monster trucks that draws out their spiritual link to agents of chaos like Big Stick and Shit & Shine.

If you were wondering how Big Lad differed from Petbrick it’s right there in ‘Monster Jam’s acid tinged rave builds or even more plainly stated in the title of second track ‘Basically, Pills’. A build and drop rollercoaster forever ascending into thrilling blasts of drums and giddy synth ruptures. It can’t just taste the lasers, it’s chewing on ’em. ‘Warm and Dead’ offers a pause for breath, a short beatless interlude of synth mood that would have passed unremarked in an old John Carpenter movie.

‘Ziltch’ tips right back into the mania, a little more video game feeling, shooting through a digital landscape at ridiculous speeds. The drum sounds are more synthetic and, as insane as Henri’s playing is, some of the glitching beats in the early part of the track just can’t be him. I don’t know if it’s a combination of Henri and artificial beats or he’s been sampled and pushed about, but it creates a different space in their sound. Perhaps they’ve used this before but I’ve never noticed it and now I can’t stop. I’m just thinking this as the track breaks down into a series of stadium rock drum fills that are very definitely Henri and enters a bombastic, stomping, final couple of minutes that fill your mind’s eye with flags and ridiculous heavy metal stage pyro.

The ‘Happy Ending’ takes a different approach. The usual pell mell mood shifts to something you might even call thoughtful. The beat is still tough, but steady and much slower. There are processed vocal snippets that whisper, they’re having a bit of a moment. It slowly unrolls a melody line that’s almost like something by Mogwai. Although less lush, Mogwai made with the limited means on the cover. I don’t know what’s going to happen, looks like a long dark winter. Big Lad make music that lives in the accelerating now, a cheap, lurid head rush that pushes the world away for a few minutes. Sure, it works best in a roomful of other reality escapees but you can still pop this on your headphones and let it shoot you into space.