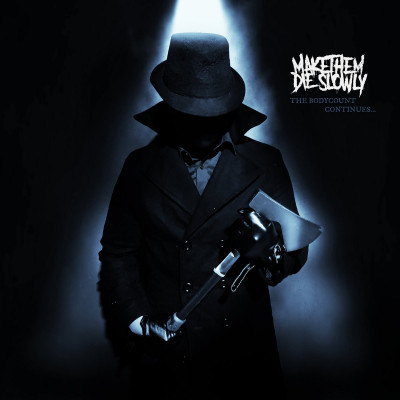 The Bodycount Continues by Make Them Die Slowly

The Void returns in a flash of bloodied steel and blood-curdling screams. After only six months your new favourite band, brought to you by one of the guys in your other favourite band, Make Them Die Slowly, return to inflict more audial bloodshed on our filthy lugholes. Produced, directed and orchestrated by Anaal Nathrakh’s Mick Kenney and starring Duncan Wilkins as the aforementioned The Void on lyrical, vocal and teen slaying duties.

Make Them Die Slowly developed quickly as a project and seemed to appear out of nowhere like a masked phantom out of the night. Kenney lays down the foundations, covering all production and audial aspects and The Void unleashes all hell into the mic after jotting down lyrical monstrosities, presumably on the hides of his victims. It is, like Kenney and Hunt, a partnership that yields a fruitful outcome… and one that is a heap of fun to listen to.

Six months after the wonderful surprise of Ferox dropped, Make Them Die Slowly return with The Bodycount Continues, an album that will see Wilkins and Kenney raise their game and expand on The Void’s maniacal journey. During recent band photos two more mysterious masked murderers appeared alongside the duo suggesting a larger spree was in the cards as well as the opportunity for live shows. The now four-piece (at least storywise) all play a big part of this albums more slasher-centric plot, cutting a ravaging path of mayhem across ten blood-thirsty tracks. After the staticky police radio intro of ‘Request Back Up’ opening track proper ‘The Bodycount Continues’ begins the album in a more restrained way to previous album Ferox, throwing a curveball by relinquishing anything too frenetic for a story-driven start and introduction to our main characters.

Fans of Nathrakh will recognise the haunting operatic voice Kenney has used in several tracks over their previous couple of albums that starts the riff-laden little monster of ‘Slaughter High’. Blasts aplenty and a catchy chorus will drag you with hooks in flesh, kicking and screaming through darkened corridors. ‘Doofus’ focuses on one of the four-piece of the same name and it’s a right banger of a track, with severe riffage against bombarding blastbeats and a sweetly emotive chorus section. We will come to love and lose poor Doofus in time.

‘Hack O Lantern’ conjures the ghostly aura of Samhaim with a Carpenter-esque intro of crackling 80s piano strikes. It’s a slow paced song which foregoes extremity with Shock-horror ambience which lingers in the air as a disturbing veil of atmospherics. The tremolo picked riffs of the chorus bring a certain ominousness to the mix reflective of the tracks theme of a killer homecoming and what horror may wait around the corner.

‘Street Trash’ is a thrashy number with smatterings of blastbeating based on the 1987 horror comedy of the same name, replete with groove-laden hooks and clever and shockingly fun lyrics recalling humorous moments from the film. “A flying one-eyed wonder worm with neither of its balls” is quite the memorable lyric and simply must be put on a T-Shirt! Ending the album is the Braindead inspired ‘Dead Alive’ which sees our fearsome foursome’s rampage come across a zombie-turning plague of rodents… and this is where things take a surprisingly emotional turn. The story reveals that our beloved simpleton Doofus becomes infected and the remaining three psychopaths are forced to flee, leaving him to become the undead. The music bleeds into an emotional instrumental that actually (like, really) tugs at your heartstrings and in effect kills off one of the characters at the climax of the album. Oh Doofus, we hardly knew ye. Side note, if you know Kenney’s work as well as I do and you listen very, very, very closely you can pick out four similar deep guitar strikes that echo ‘The Supreme Necrotic Audnance’ during the “Murder night” lyric.

With The Bodycount Continues the bands unique sound has truly been defined and cements them as a force to be reckoned with. Make Them Die Slowly play catchy and rollicking hook-laden metal with a venomous bite, splattered with all the gory delights of horror movie tropes. The music can be sinister and beautiful at times with its soundbite nuances and playful synthy takes on theme songs and general horror atmos, or it can be savage, mauling and sharper than The Void’s axe. The album takes its cue from Ferox and adds a few twists and turns along the way, like any good horror movie would. Like Ferox, The Bodycount Continues is a fun and frenzied album steeped in nostalgic smiles for any fan of the horror genre, and those who aren’t will appreciate the effort put into this regardless.

One of many great things about this band is the creation of The Void, our Crypt Keeper and gruesome guide through these chilling adventures. Without The Void Make Them Die Slowly would still be an amazing band, but what Wilkins has done is actually very clever. Wilkins has made The Void a marketable, mischievous and menacing character that pokes fun at vintage horror as well as lauding those movies for the terrifying treats they are. Not only that but, mostly due to Wilkins lyrics, there is a narrative for fans to follow, just like in the countless sequels of our favourite horror movies, that is woven through the two releases and will continue to shape throughout the next one as well, making the two albums more than just music but mini movie masterpieces. Like some of the most classic horror movies the audience end up looking forward to the kills and rooting for the killer, that hulking, troubled character with a thirst for carnage, and that’s what Wilkins does for The Void and his merry band of psychos. What awaits our anti-heroes in album three is for now unknown, maybe we will meet poor Doofus once more, but what is for sure is that it will be gleefully bouncy hard metal imbued with shock and sickness. Bring your weapons, and possibly your hankies, as they’re coming and it’s gonna get real!