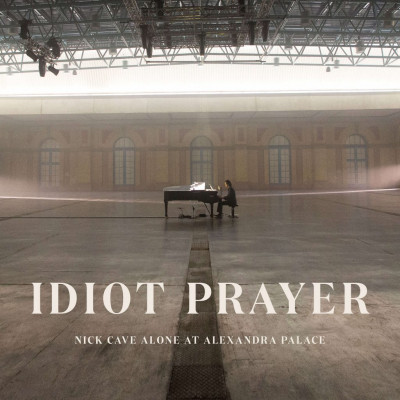 A mid-pandemic, one-time, live-streaming event. Nick Cave alone at the piano in the cavernous empty space of Alexandra Palace. Something to fill the hole of a cancelled tour and the general bleak drifting days of early summer. Now available for you to play in the car while your kids play football in the autumnal rain. Or catch on limited release at the cinema if you missed the original ‘event’. Idiot Prayer was a decent response to an unusual situation and at the time it did manage to achieve some of that missing charge of shared experience however atomised. Its inevitable arrival as a souvenir album however, dissipates that feeling yet further.

Nick isn’t short changing you here, Idiot Prayer is a hefty career spanning selection box of 22 songs. That’s a long time to be staring up at his beetle brows and gypsy rings from a cinema stall but free of the unavoidably rather static visuals these quieter versions can play out their stories. It’s no surprise that some fair better than others in this new setting, although perhaps a little soon to wonder if any might supplant their earlier versions in fan’s affections.

It opens on a sliver of ‘Spinning Song’ recast as a spoken introduction to the whole performance and folded into ‘Idiot Prayer’ itself. Here at the very start is one of the most striking things about this set because at first it seemed obvious it would be a live reading of Ghosteen. Not only was it Cave’s recent album but the music was already spacious and stripped down. A sparse and emotional meditation on loss, Ghosteen’s liquid songs are buoyed on clouds of electronics and strings. To the irritation of some fans it’s at a far remove from the rooted weight and drama of Bad Seeds records past. Yet beyond this truncated version of ‘Spinning Song’ only two other songs from it feature. Listen again to the studio version and you can see why he felt the need to cut the song’s sighing second half. It becomes an incantation or prayer. Ghosteen‘s strength is in this almost hallucinatory songwriting but perhaps Cave felt solo piano arrangements clipped their wings somehow.

Instead he leans heavily on The Boatman’s Call from which the title track and almost a third of the songs here come. They’re piano driven and in that sense obvious choices but it still seems curious to rework fully half of an album more than twenty years old, having just completed a three album run of increasingly minimal and personal music. They’re perfectly fine versions but none of them have, as yet, registered any particular shift of emphasis or arrangement to explain the choice, and some of his phrasing on ‘Into My Arms’ bothers me. It’s a shame he couldn’t find time for ‘People Ain’t No Good’ but probably for the best.

In another online event Cave will shortly be discussing Murder Ballads with former Bad Seeds Mick Harvey and Blixa Bargeld which should prove interesting. Nothing from it features here. Looking back from the lofty vantage point of Alexandra Palace it’s clear this is a dramatic change in Cave’s career. Murder Ballads put a blood stained overblown end to the southern gothic of his old testament phase and the calmer, more personal songs of The Boatman’s Call set out on the long and crooked path that leads to his more recent work. It also notably sidelined the band, who sit in the audience on the back cover wondering what they’re supposed to be doing, new boy Warren Ellis looking unrecognisably clean shaven on the end of the row. There are people who still see Cave as a smacked out cartoon murderer and fans who prefer that version of him. It’s neither healthy or sustainable and fortunately for both his writing and his sanity he’s left it far behind.

‘The Mercy Seat’ will always be one of his greatest songs but this version feels obligatory and unnecessary, almost out of place. Its anger and defiance at odds with the prevailing mood of treasuring life’s fragile connections, of reconciling the unimaginable grief of his own loss with a wider sense of how unavoidably human it is. Concerns that flower on the one new song ‘Euthanasia’ which at first appears quite slight but holds the key to the whole album. Its deceptively simple lyric has Cave searching the world over in repeating biblical images of damp earth and night sky, thorn bushes and old cities. It resolves in a low key image of a loved one’s smile. It glides by so softly you could miss it, it took me a few listens, but when it hits, it hits you with a healing pain.

Idiot Prayer apparently concludes a trilogy of films with One More Time With Feeling and 20,000 Days on Earth. With Ghosteen, Skeleton Tree and Push The Sky Away forming another it’s unclear what might come next from Cave which is an appropriate echo of the general pandemic feeling. Grinderman 3 might complete yet another trilogy, two Grinderman songs receive perhaps the most dramatic reworking here and fair better than ‘Girl In Amber’ which sits between them and comes out slightly too strident somehow. An obvious comparison for Idiot Prayer is Live at KCRW. Recorded by the Grinderman line up and Barry Adamson it also features stripped back live performances, indeed the first four songs on that set all reappear here. It’s noticeable that Cave seems more at ease with a band and a small crowd than here. If it’s understandable that even a performer of his experience might find playing and singing alone in a vast hall slightly daunting and surreal, there seems a background note of that tension somewhere, hard to pinpoint, that keeps these versions back from greatness.

You can perhaps have too much of a good thing but with so much to choose from and the miracle of the digital age to assist you I imagine anyone can put a 10 or 12 track version of this together that really works for them. Towards the end comes a dramatic contrast, ‘Papa Won’t Leave You, Henry’ is possessed of an apocalyptic vision well suited to the rolling horror of 2020 but I’m not convinced its overwrought swagger translates well to this version at all, it seems caught between two opposing moods. On the other hand I was delighted when he closed the set on ‘Galleon Ship’ which I took to instantly as the high water mark of Ghosteen. It’s an incredible song, a great version and a fitting close to the album.

Cave isn’t exactly the last man standing, there are other artists of his vintage who are still creative, still moving forward, but none with quite the breadth of his appeal. Like his heroes Cohen and Dylan, Cave has come to vaguely symbolise an adult literary seriousness in song. He has somehow reached a point of such incontestable greatness that it feels incumbent on even long term fans like myself to take the piss a bit, to deride this caper as his transformation into Barry Manilow for middle aged ex goths, or whine about how expensive it is to be a fan these days. There’s plenty of that stuff to go around and thankfully he appears to have a sense of humour about it – the saga of his management trying to secure him a free piano like the one used here for example – but as much fun as it would be to do that there’s still sufficient brilliance to make it feel like a cheap shot. Hopefully next year the postponed tour will happen but where Cave’s music goes after that seems now to be an open question. It’s remarkable that an artist this far into their career is still holding out that promise of going somewhere new for both themselves and their audience. Looking forward to seeing where we go.