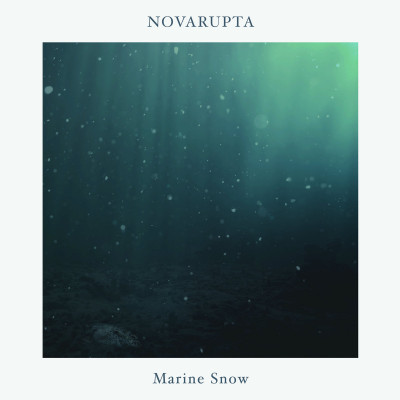 It was only through reviewing Esoteric Oppression last year that I discovered founding member Alex Stjernfeldt had left The Moth Gatherer. A couple of months later he resurfaced with the debut Novarupta album Disillusioned Fire. Whilst the split in the band was sad to hear, the world of post-metal did gain two exceptional albums from the ashes. Quickly on the heels of that sludge ridden debut comes Marine Snow which is a darker affair and the dense slabs of post-metal excellence contribute another stellar album to a Swedish scene which shows no sign of letting up.

Diving into this album is like being a rock thrown overboard and sinking from the surface to the deepest point in the ocean. The songs are interwoven with an increasing density which causes compression and yet offers a feeling of weightlessness. This isn’t a heavy album in a traditional sense and only one track has screaming as the main vocal style, but it is still dark. Stjernfeldt has again stuck to his successful collaborative approach with a second album featuring different vocalists on each track and it is uniquely enriching to the album.

The tone is set on opener ‘Broken Blue Cascades’ as Josh Graham applies his unmistakable apocalyptic vocals, switching from his gravely clean tones to a powerful grit as the wonderful guitar tones riff with a sound similar to The Old Wind and Breach. My personal favourite on the album comes on ‘Every Shade of Water’, Lea Amling Alazam delivers an exceptional display and her vocals hook deep into the wonderfully expansive track beneath. Whilst the vocals are stunning, they wouldn’t be as startling without the great guitar melodies to trace along and it’s a flawless example of collaboration where both sides benefit from each other. The track is solidified by the secondary vocals of Robert Lamu who adds a bit of depth bridging the soaring vocals and the pulsing bass line.

The final three songs show the difference in the sonic heaviness of the album. ‘No Constellation’ has the heaviest vocals and so feels like a lead weight which speeds up the descent, whereas ‘Trieste’ and ‘11°22.4′N 142°35.5′E’ are heavier in their atmosphere, so whilst sinking it feels more dream like even though the surroundings are bleak and dull. Closer ‘11°22.4′N 142°35.5′E’ again features some brilliant interplay between the melody of the guitars and the vocals. It builds to an exceptional crescendoing chorus where Arvid Hällagård rips into “so light it up, let the torch just burn, just burn” which conjured up images of flares burning under water in a vain attempt to attract attention and survive. The tension that the tracks build and hold is finally released when the sounds of the crashing waves play the track to its conclusion.

Marine Snow continues a great legacy of ocean themed post-metal albums and of recent highlights it steers clear of the more metallic Pelagial by The Ocean and weighs on the heavier side than Oceanic by ISIS. Marine Snow is a magnificent achievement and a wonderful post-metal album which stands with the finest in the genre. As a concept the two albums have fitted together seamlessly with some amazing musicianship and some brilliant vocalists. It is great to know there are two further albums to come in this series and it is shaping up to be something extremely special.