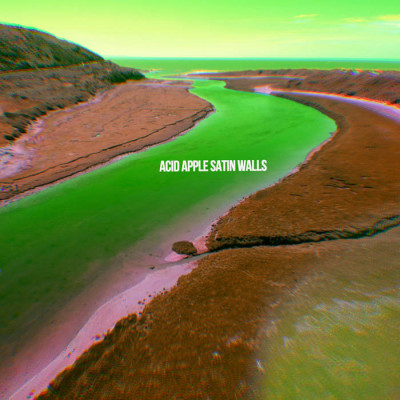 I’ve been a big fan of Sam Barton’s since I first discovered his band Teeth Of The Sea via their mind-blowing post-techno psych album Master. Barton’s trumpet playing on ‘Responder’ felt like it spawned from the book of revelations heralding the apocalypse. There was quite literally epic trumpeting elsewhere on the album, but that performance in particular to me, along with that of the rest of the band will stand as one of the most transcendent pieces of music ever recorded. Having seen Barton play on stage and having been lucky to once play on the same stage as him, as well as knowing quite well the diversity of his output thus far, I feel confident that this will be a great album, but also that it will display a great deal of versatility and accomplish an inspired bricolage of sounds.

The album opens with ‘Rabaiotti’s 9AM’, a joyous trumpet serenade that feels stuck out of time in a way that reminds me of Lemon Jelly’s ‘Nice Weather For Ducks’. I feel like this choice of opening track instantly establishes this album as something unlike anything else I’ve heard this year and indeed, going further into the album it is quite clearly that this is an utterly singular album, that requires taking apart to find its influences and tethering. The second track ‘Presbyterians’ is largely based around a pulsating bassline, heavily processed vocals/samples and chirpy synths that sound like birdsong. It feels completely alien and the big synth arpeggios are absolutely sublime.

The stark contrast of ‘Presbyterians!’ to its predecessor definitely starts to give this album some sci-fi, time travel, warpspeeding LSD vibes. The album being called Acid Apple Satin Walls did suggest it was going potentially going to be psychedelic, but having gone from Return To Forever to Aphex Twin in two tracks, I think we can all rest assured that this album is a fucking trip. ‘We Painted Our Faces and Gave False Names’ seems to act as a kind of bridge marrying the styles of the first two tracks, for me this is the point where the album really starts to blow my mind, as solid as the first two tracks are they feel like they’re building the album up slowly. The keys and synth work on this album is just too good, it’s kind of like Vangelis, but somehow way better and the way it’s been combined with Barton’s signature trumpet/cornet playing is just fucking perfect. I’m actually in awe of the album’s brilliance. I was expecting it to be good, but I kind of figured without his usual support from bandmates, that Barton’s solo album might be a bit lacking in depth or overall strength of arrangement. That expectation has been blown into a giant pink bubblegum balloon and best with a loud, cartoonish pop.

‘Nark’ diverts the album into yet another new dimension, introducing an acoustic guitar and relatively clear vocals to the album’s ranks and it really adds to the rich diversity of timbres and genres on the album creating something that sounds welcomely and commendably original. I love how Sam’s gone from heralding the rapture to beckoning in Bojack Horseman with his trumpet sound. In the former, his sound is anxious and explosive, here’s its sedated and tranquillising. I have yet to make out the lyrics in this song, but the vocals very much feel like they come from a post-raver or slacker background kind of like The Beta Band or LCD Soundsystem.

The music’s still dancing in your head, but you’re too wiped out and overwhelmed by thought to try and belt it out. This is probably the best song for chilling that I’ve heard in over a year and honestly, couldn’t imagine a better album for a lockdown trip at the moment. Even the new Ozrics whilst great for that doesn’t match the psychedelic stoicism of this record that seems to welcome the bizarre with open arms. Although, there is one moment where it feels like the acid is eating you and that moment is referred to as ‘Sex & the City Solution’. It arrives without warning with a pretty overtly synthwave grounding being pounded into oblivion by a wildly jackhammering lead synth or perhaps heavily processed guitar…whatever it is it hacks away relentlessly at the sounds in the mix below. It almost feels like Sam realised the foundation of the track was too easy to pin down, so he fucking slashed it to bits. Great stuff!

‘Chime and Pandemonium’ is so relaxing, the trumpet sounds smoother than melting butter and the bird song returning once again as a gentle motif. The keys are absolutely dripping in well-polished effects, they sound fucking incredible. It’s this kind of like state of zen during absolute chaos that becomes the overall character of the album. I wonder if Barton was as high making this album as I am while listening to it. It’s mind-blowingly good. ‘Sleuth’ is yet another point on this album where I think “ah, this is the best one” and then I listen to them all again and they’re all the best one. Everything just sounds fucking great, it’s really well-produced and mastered (Wayne Adams, unsurprisingly) and then melodies are awesome.

‘The happening, boys’ acts as another transition, the nauseous arpeggios and whacked-out samples, definitely remind me of some of my more intense solo runs with psychedelics. I wonder if there’s any squelch to be seen on this album? ‘Mayfair in Exile’ picks up where ‘Nark’ left off with more acoustic guitar and vocals backed with whacked-out atmospherics. The theremin or general pitch-modulation that enter the fray in the middle of the track makes the maggots in my brain crawl, it’s always good to feel them endorphins swooping in. Also, the descending ostinatos that close the track feel like something out of Button Moon or some other spacey, psychedelic children’s show from way before my time, which I love.

‘Ombudsman’ is the final track on the album. I get that the word has a meaning outside of Peep Show, but I’m gonna disregard that ‘cause ‘Death of The Author’, stand and deliver, this art belongs to me now. I like the percussion on this track, the kick drums sound like gunfire and I really like that, it’s got a kind of industrial vibe and some strong synth work to support it and a kind of melodic yet, abrasive way of duality about it. It’s somewhat reminiscent of the more recent Nine Inch Nails output in that respect. It’s a surprisingly walloping end to such a meditative and strange album, but realistically, given that it is such an unusual album it makes perfect sense as a listener and it just works.

In short, this bizarrely melodic, masterfully well-written and produced lysergic opus is easily one of my favourite albums this year and displays pretty boldly that anything Sam Barton plays on is fucking amazing.