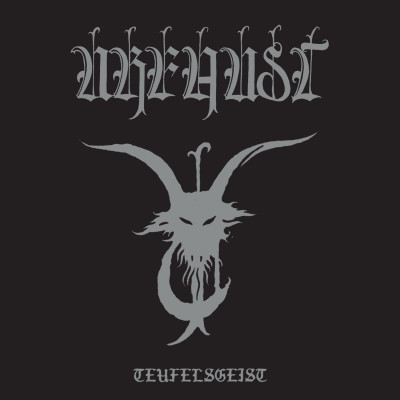 The Netherlands may have recently sprouted a creeping multitude of black metal spores, cutting deep into veins of striking originality, and this the faithful fanatic should gratefully hail. But now the omens in the entrails welcome the return of the true old masters of outlandish, sky-clawingly melodramatic black metal: Urfaust.

Teufelsgeist is a new recording of five tracks over 33 minutes, the release (of course!) tying in with a limited edition Urfaust signature gin for the ritual drinker, the true clochard, the devotee of possession by intoxication. On one hand the combination is entertainingly overblown, described as ‘an impressive diptych of music (the devil) and spirit (geist)’. On the other hand, calling it ‘Urfaust Ambient’ seems to undersell it slightly, as that might imply that the tracks contain merely some of the keyboard drone extensions featured on some previous releases. I’ll admit I’ve always been ambivalent about these… despite listening to a heap of drone and minimal music of various kinds and despite the clear skill this band have at crafting warm but crystalline, zoned out but still narratively evocative expanses of synth textures. They just seem so staggeringly unique when it comes to their bizarre leering riff operas that I’d rather have more of those. Anyway, guitar distortion may not be as central here as on classic tracks of the past, but make no mistake: the opening track alone is the most gloriously, wildly fantastical Urfaust songs—or black metal songs, or just, songs, honestly–to emerge in years.

The second track is a wandering dirge, the masters of outrageous drama conversing with the swirling spirits in a tentative dance of shadows. It really becomes clear amid the slow trudge how important the vocals are as an instrument, a magical force of urgent incantation and wild abandon in each tumbling syllable. OK so after all there are some ambient passages, and the third track is along these lines, a kind of frosted lunar landscape with hints of a frosty but majestic sunrise in the glistening tones. The fourth track is something of a middle ground, led by bass and drums in a slow staggering lurch but overtaken at times by icy winds that conjure overheard snippets of frenetic dialogue before collapsing in the snow. On hitting the ground the monsters really come out for the final track, a whole range of lurking, croaking ghouls gibbering in the cold night as the bells klang in the background, mesmerising you into distraction as you attempt to get up and stagger onwards. But alas, your fading consciousness can only briefly capture the memory of the first track in all its kaleidoscopic insanity, too fantastical to even believe it exists, at least for long…

That first track… it’s a masterpiece of audacious true kvlt twinkling, a whimsical sparkling monument of icy sorcerous power and lavish horror. It spins an entirely unhurried cyclical twirl through measured, patterned drum smashes, cool shifting basslines, and shimmering keyboard arpeggios of sinister glamour that fall upwards like backwards snow for four full minutes before the entrance of the vocals, weird wordless yodeling yells that lead us manically to the highest tower of the castle. It’s the most absurdly evocative combination of sonic theatricality and occult power. Perhaps my favourite dose of glittering, menacing drama from Urfaust since ‘Der Einsedler’, a lurid, cryptic and fabulous spectacle of extremity.