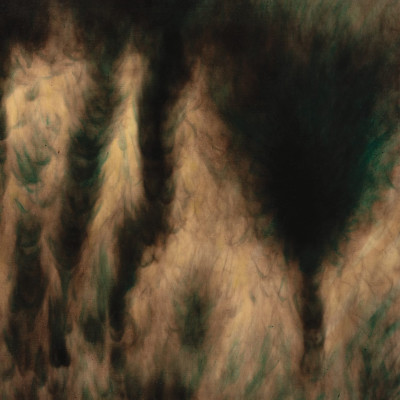 Lamentations, the new album by William Basinski, creates a fantastically immersive soundworld, revisiting the powerful impact of his processed loop investigations while exploring a wider range of atmospheres created in that way. He reprises the setting forth of looping taped orchestral snippets, deep fuzz and staticky halts and hiccups and all, that gave us the epochal Disintegration Loops, but where the method there was deployed in magisterially austere fashion, here there is a more expansive and playful approach to these manipulations of fragments.

Once set in drifting motion, some loops settle like soft sediment to sink into, others caught by the wind in quirky eddies. They range from the opening track ‘For Whom the Bell Tolls’, its gothicky title suitably matching its foreboding charcoal solemnity, to more flighty, brittle melodic fragments as in ‘The Wheel of Fortune’ which follows it. Much of the album hovers between these two markers, with casually captured snippets of sound treated like sonic photographs of hovering hummingbirds wings, played back frame by frame in order to gaze into that grainy detail for hints of something secret and magical hidden there. Or as if due to an administrative error we’ve slipped into a nearby but altered dimension where machines and cities go to sleep, tired engines sighing in drizzling rain.

‘Passio’s expansive formless washes foreground the shimmering crackle of tape decay, while ‘Transfiguration’s has whistling hints that pierce the murky clouds and ever-so-tentative moments of near silence towards the end. The most obvious distinction is that some of the bits that are set slowly awhirling feature strongly audible voices, in operatic sounds that can only described as lamentations. This occurs on three of the twelve tracks, and to my ears they’re by far the most immediately striking of moments on the record. The rest of the tracks are perhaps more familiar in relation to his works in drifting repetition, sombre ellipses that grow in their repetition from unspectacular soft grey hushed tones to far grander yet still fragile and elegiac gestures. I almost wondered if they might have been more coherently collected separately, if Basinski had made a whole album focused on setting these shards of grieving vocal melodrama into his trademark sombre cyclical haze. Particularly since the three prominently-voiced tracks are unevenly distributed throughout, tracks five, ten and eleven.

The latter two deploy short repeating cuts of grief-stricken vocal melodrama, giving the sense of an old shellac opera record skipping on the gramophone at the end of time. The clear highlight of the album though is ‘O, My Daughter, O, My Sorrow’, which uses a longer section, appearing at the edges of hearing halfway through the near-seven minute track, amid a dark, watery descending pattern of indistinct instrumentation, orchestral drama miniaturised, sunk into furry slow tape textures and then painted over large swathes of time. The voice pierces this, or maybe instead grounds it like a lightning rod collecting and crystallising the extreme but unspecified feeling that swathes the track, adrift from context, signifying extraordinary meaningfulness without any meaning. Having listened a couple of times already, this came on when I was driving out of an enormous multi-storey car park and can thoroughly recommend this playing at high volume while navigating the repetitive angled circulations of concrete, darkened vehicles, echoes and dirty air.

The final track is a charming Disintegration miniature, barely a minute and half of a tiny note singing out over the shuffling feet of fluttering microphone interference, as the record as a whole bows out gracefully. Stunning.