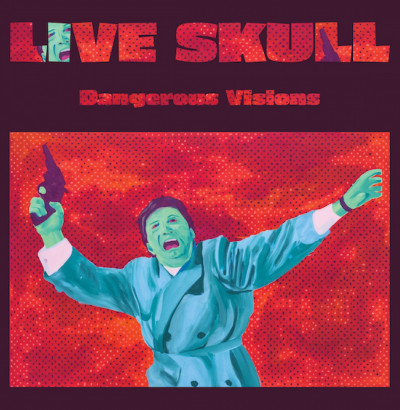 A little over a year ago, rather unexpectedly, veteran New York noise rockers Live Skull shuffled back out of the crypt with their first album in 30 years. Saturday Night Massacre honed and tweaked their older sound a little but convincingly picked up where they’d left off. Dangerous Visions follows up on that with a collection that bridges the three decade gap in the band’s career, offering some new tunes and a little history lesson. It’s got songs old and new for fans old and new. If you like your rock music dark and intense, exploratory but still roughly song shaped then there’s probably something here for you to enjoy.

The elephant in this dim lit, smoky basement is Sonic Youth. Live Skull came up in the same post No Wave New York scene alongside them and Swans. Side 2 of Dangerous Visions features recordings they made from 1987 to 89. In 1990 Live Skull imploded while Sonic Youth signed to Geffen and released Goo, beginning their entertaining, if short lived and ultimately doomed, flirtation with the mainstream. Live Skull did not possess the Youth’s buried pop instinct but the comparison seems as inevitable as it is largely unfair. Still, first tune here ‘In a Perfect World’ finds them sounding like an agreeable blend of Sonic Youth and The Cure, Mark C’s vocals and guitar both sounding clear and strong, leading the band on with something approaching hope.

Hope is sort of a new idea for Live Skull, their general thing was dystopian visions of 80’s America filtered through horror tropes and buried in layers of atonal guitar grind. ‘In a Perfect World’ starts with the sound of sirens, looks out on the burning world and, for once, allows a dream of a better one. There’s a little more light and space in its sound too. This is true of all the new tunes, a little more clarity and separation between elements, a little less of that swirling murk. ‘Dispatches’ even toys around with a tropical rhythm. Possibly this is just thirty year’s advance in what you can achieve when recording on tight budgets. It’s most noticeable on ‘Day One Of The Experiment’, a live recording which sounds both clear and fantastic.

The second tune underlines this continuation and refinement of their core sound with a new version of ‘Debbie’s Headache’, a stand out track from 87’s Dusted. Early on three of the band took turns on vocals and mostly pushed them down into their howling sheets of noise. Deciding to concentrate on their playing they got in Thalia Zedek on vocals and drummer Richard Hutchins (alongside Mark C the only long serving member of this new 2020 line up). There’s no doubt for me that the records made by that version of the band are the best of their original run. Out there on the internet, of course, I’ve seen negative responses to the final album Positraction and possibly there’s a slight failure of nerve, or finances, or early signs of cracks but personally I really like it and it certainly seems to be the point the band picked back up from on Saturday Night Massacre.

The bulk of the second side is a John Peel Session the band recorded during the Positraction tour and it’s great. Tight and fierce from touring they play two tracks off the album and two new songs suggesting at this point they were still very much a fully functional band. ‘Safe From Me’ is in the running for my favourite Live Skull tune and the session version brings a more desperate edge to its dreamier sections and a wilder live ending. The new tunes are strong if rough cut, ‘Someone Else’s Sweat’ seems very much Zedek’s show, a lyric and performance that points towards the great things she’d do in her next band Come. Her vocals are great on the whole session. ‘Adema’ straight tears it up, a destruction tune of pummeling drums and raging guitars that must have been a lot of fun to play live.

There a couple of stray outtakes to round things off, all sounding good too. I could go on but we better wrap things up. The new stuff on the first side is certainly strong enough to suggest we should look forward to another new album at some point and it seems like a fairly comprehensive reissue programme is on the cards too. Always nice when a band comes back to do something new and it doesn’t suck. Although to be honest the return of Live Skull was never likely to work as a cynical money spinning nostalgia fest. Against the odds then this is a surprisingly coherent collection, the weirdo essence of Live Skull holding together the work of different line ups decades apart. A treat for old fans and possibly a pretty decent introduction to the curious.