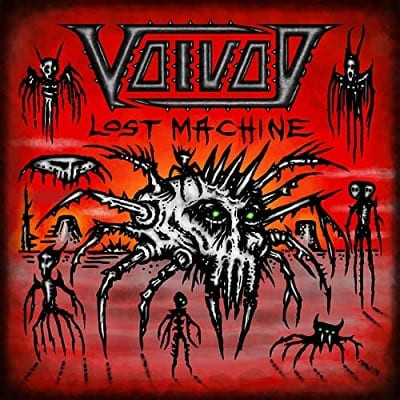 Since their formation in 1982 in Jonquiere, Quebec by the late co-founder Denis “Piggy” D’Amour, Voivod are one of the heaviest metal bands to come out of the thrash metal movement in the 1980s. From speed, thrash, and progressive metal, Voivod can take their music by bursting the doors down with a giant battering ram at a high altitude of pure maximum fucking volume.

I first became aware of Voivod’s music I believe back in issue 97 when I read about them in the September 2006 issue of Classic Rock Magazine covering the Secret History of Prog. I believe they were mentioned in the prog metal story and mentioned one of their albums Nothingface which was their fifth studio release as a recommendation. And I went ahead and bought it on the iTunes Store (now Apple Music) back when I was buying from them at times during my College years. And then I had forgotten about them. Until 2017 when I bought three of their albums from the Noise Records reissue; Killing Technology, Dimension Hatröss, and Rrröööaaarrr on The Laser’s Edge website. And that was where I got back into the re-introduction wagon for Voivod’s music once more. That and the live release of Lost Machine on the Century Media label showcases the band at the Quebec Summer Fest last year on July 13th at the time they were promoting their 14th studio album, The Wake.

Listening to the live recording at the festival, you can just close your eyes and imagine yourself being at the venue rooting not just for the band, but for 40 years despite the various line-up changes, they are still growing stronger than ever by keeping Piggy’s spirit alive. Not only their promoting their latest album, but the EPs that include Post Society and The End of Dormancy along with sections from War and Pain, Nothingface, Angel Rat, Dimension Hatröss, and Killing Technology. Lost Machine is one hell of a ride that the audience were embarking on during the July performance of last year at the festival.

With ‘Psychic Vacuum’ it is like a tidal wave destruction between Michel’s drumming, Daniel’s guitar, and Belanger’s vocals as they are in ramming spec to give some brutal wake-up calls as Laroche’s bass goes in for the kill as he hits those notes as if he’s Leatherface from the original horror classic from 1974, The Texas Chainsaw Massacre. The call-and-response between Denis and the crowd on ‘The End of Dormancy’ tackles the end of the world. There are some sinister tones that gives you some dangerous details on what they’re about to expect or was it all just a dream to escape this hellish nightmare.

But then, all of a sudden, holy shit in a fucking handbag! It becomes this roller-coaster militant metallic riff section as Denis channels the masters of Alice Cooper, Peter Hammill, and the operatic scats of Magma’s own Christian Vander before Mongrain goes into some surreal lead guitar sections that sounds like a wild saxophone improvisation from Captain Beefheart’s Trout Mask Replica.

‘Post Society’ is where the rocket are lifting off for some space madness synthesizers as audiences embark on this raging volume from Laroche’s bass gets the gears running for this speed metallic roar as Denis gives them the adventure of a lifetime while Michel and Daniel are giving him the ammunition they need to hit those targets really hard! ‘The Lost Machine’ sees Denis walking like Boris Karloff from the Frankenstein movies of the Monster movies from the Universal-era before going into the stories of the adult illustrated fantasy magazine, Heavy Metal as ‘Iconspiracy’ has chasing guitars going up and down the scales like crazy with some beast-snarling vibes that are completely out of this world with some Stravinsky midsections in effect!

But the icing on the red velvet cake is their take from the Syd Barrett-era of Pink Floyd’s ‘Astronomy Domine’, which was where I first heard on the Nothingface album a decade ago. This was I knew a crowd pleaser on the live version of the Floyd classic back when they were an underground band before hitting the big time with Dark Side of the Moon.

Lost Machine: Live is one of the most insane live albums that may not be everyone’s cup of coffee. Whether you get Voivod or not, you have to give them a big stamp of approval for the 40 years they have been by headbanging until the break of dawn. And if this is your introduction to the band’s music, in the words of David Bowie’s disclaimer on The Rise and Fall of Ziggy Stardust and the Spiders from Mars, Lost Machine: Live is To Be Played at Maximum Volume.