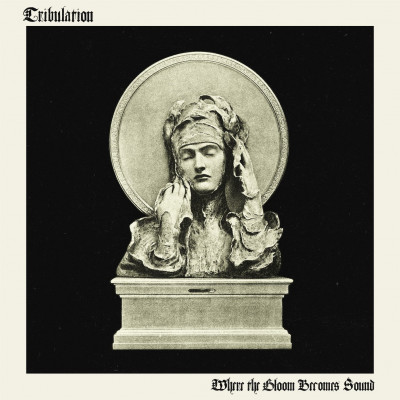 Where the Gloom Becomes Sound by Tribulation

From their beginnings as a heads-down thrash-driven death metal band, after album number two Tribulation evolved into an entirely different beast. At that point they embraced schlocky horror, using black-and-white horror movie stills on their 2015 album Children of the Night, adding some phenomenally catchy guitar hooks, and giving it all a touch of roughness with the gruff vocals of Johannes Andersson.

Children of the Night got me hook line and sinker: the opening tracks ‘Strange Gateways Beckon’ and ‘Melancholia’ are, in many ways, perfect heavy metal songs. The massive melodies, the energy and heaviness, the vocal style, all topped off with some unforgettable riffs and superlative guitar work. But a failing of both Children… and its follow-up, 2018’s Down Below, is an inability to sustain the perfection for the whole album. Those songs I mentioned are among my favourites from the last few years, but I’m hard pushed to name many other tracks from the same album. So for me, until now, Tribulation have been a band with (hopefully) their best work in front of them.

Which is where the new album, Where the Gloom Becomes Sound, comes in. First track ‘In Remembrance’ would be radio-friendly if you made the vocals a bit cleaner. There is heaps and heaps of guitar melody, and a singalong chorus. The transformation is complete. Tribulation have embraced the new them and released an album that builds on recent past strengths. It’s not front-loaded as recent outings have been, but it does use that talent for melody showcased previously. Atmospherically, the tone of Where the Gloom… straddles the boundaries of rock, metal and goth. Themes of magic and myth run through every song, with influences from western and eastern traditions. Musical influences are also obviously broad, with the press release citing Swedish folk music as well as NWOBHM and vintage Morbid Angel.

Second track ‘Hour of the Wolf’ trades on a signature hooky riff and, with a mid-tempo pace, embraces the darkness and pumps the goth rating up to nine. Dare I say stadium-friendly? (Well, one day, let’s hope.) Following on, ‘Leviathans’ uses a very simple and understated three-note melody tagged onto the end of each rhythm section. It’s very effective, and showcases the songwriting and guitar-playing talent in the band. The mood changes with ‘Dirge of a Dying Soul’, which ain’t a dirge but does feature some Candlemass-bothering doomy riffing and a slower pace. Andersson’s vocals fit the style very well here. The pacing elsewhere is varied. With ‘Daughter of the Djinn’ sounding like a galloping Maiden homage, and ‘Inanna’s slower, more introspective feel.

Good bands evolve and follow their influences. Tribulation have done just that, working through a period where their albums had the roughness and ferocity of early work melded with infectious melody. Where the Gloom Becomes Sound is the product of that evolution, the next step. What we have here is a band comfortable in their own skin. It’s a well-rounded and very well executed set of songs. The album is in no way front-loaded, and not a mixture of killer and filler, much to my relief. Tribulation have created an accessible behemoth, and it’s all the better for it. It’s bound to win them a few new fans.