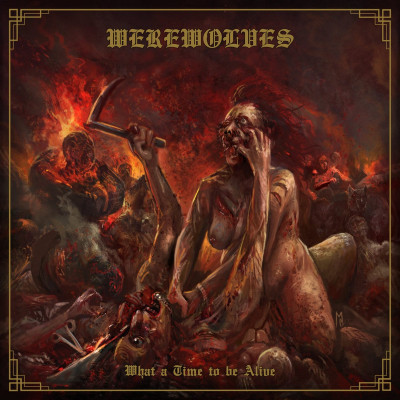 What a Time to be Alive by Werewolves

Now this is a real toe-tapper; an ideal soundtrack for the paradise which is planet earth in 2021. Because as the title of Werewolves’ second album suggests, this really is a monumental time to be alive. This era will be studied for generations – future high-school kids will marvel at how so much news, events, car-crashes and clusterfucks were shoehorned into a few short years. But right now, in the early months of 2021, you’re no doubt sick of music that is described as a product of these times. You’ve heard one paean to pandemic-induced isolation, racial inequality or insidious right-wing encroachment, you’ve heard them all, right?

Wrong. This is pure anger. It’s around 30 minutes of double-kick drum blasts, offensive guitar riffs and dystopian roars. It scours the fug from your brain and gives you an outlet for your rage that is more effective than a billion pop stars warbling from their home studios about nature healing. This is music that is loud, fast, furious and knows damn well that it is dumber than Lloyd Christmas. A relentless pummelling to the face, devoid of subtlety and overflowing with insults and anger, as well as a sense of fun (surely you cannot write a song called ‘Crushgasm’ or ‘Unfathomably Fucked’ with a straight face?).

We need this album. We do. Not convinced? Try the first song, ‘I Don’t Like You’. It begins with a death-roar Dee-Dee Ramone style “one two three four” then immediately launches into a wall of blast beats and thrash guitar, as the vocalist roars “I don’t like you, fucking hate you, you disgust me.” If you haven’t got a person in mind that you’d love to shout these lyrics into their face, then you clearly haven’t been paying attention the last few years.

Speaking of which, Werewolves are no strangers to capturing the self-destructive mood of a planet with their releases. Their first release, The Dead are Screaming – not quite as relentless as this one, but still pretty bloody heavy – in 2019 was followed by their native Australia being razed to the ground with out-of-control wild fires. They started recording What a Time… at the beginning of 2020. Yep, it is their fault. As the drummer, Dave Haley, admitted: “We really fucked the world when we decided to do a second album.”

The theme started by ‘I Don’t Like You’ continues with ‘Sublime Wartime Voyeurism’ and ‘Mission Statement’, both of which are aggressive as a poorly-endowed policeman and largely unintelligible lyrically but the latter – a beyond-hardcore onslaught – features the following: “I will set the world on fire, barbecue you all,” (or something to that effect).

‘Crushgasm’ then ‘Unfathomably Fucked’ follow and they are yet more death-thrash-grind-holy-shit-how-can-they-play-so-fast-and-still-breathe type songs. Werewolves’ stamina is commendable, especially in ‘Fucked’, which maintains a dizzying pace for over four and a half minutes. ‘Antisocial’ is pretty self explanatory – it is the sort of song you’d play to serve as the background music as you answer the door to religious people. The vocals are especially guttural and it sounds like there are three drummers battering the poor kit.

By this point in the album, you’d be forgiven for feeling a little punch-drunk. But there is absolutely no let-up, as ‘Traitors and Bastards’ and ‘A Plague on All Your Houses’ (told you subtlety wasn’t these lads’ strong point) keep up the barrage. Actually the plague song does ease off a little, but that is like saying methylated spirits with a small splash of tonic water is slightly less potent.

The final song, however, gives the game away: this band can actually write a song. They can toy with us by bashing out eight pieces of angry, cathartic filth – and we would be satisfied with that, if also exhausted. But the ninth, ‘They Will Pay with their Own Blood’, shows us they are brave enough to slow things down a little and even get a little anthemic. Sure they revert to a zillion beats per minute in the second half of the song and the over-riding feeling from the album when the feedback fades out is still “everything is fucked”, but hey: you have to admit, it is still quite a time to be alive.