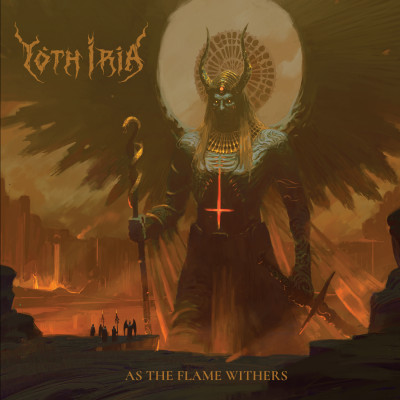 As The Flame Withers by Yoth Iria

I was waiting for As The Flame Withers with eager anticipation following February 2020’s tantalising Under His Sway EP. That release featured two original tracks showcasing what Yoth Iria were capable of, including the superb ‘Sid Ed Djinn’ which in the space of just 7 minutes manages to combine barrelling black metal, thunderous doom and a Middle-Eastern-style female vocal (yeah, it works), all to brilliant effect. I for one was hooked, and checked Twitter frequently for news of a longer release.

As The Flame Withers is that release, and with it we have the first full length from a band that boasts a pedigree stretching back to the early 1990s in the form of Jim Mutilator and The Magus, alumni of early Rotting Christ, Varathron and numerous other formative bands of the Greek metal scene. Yoth Iria’s attack is precise and self-assured. The music and song writing are as focused as you’d expect from such veterans.

The two flawless openers, ‘The Great Hunter’ and ‘Yoth Iria’, are dark and fast, with a diabolical fury that fits the artwork (check out the massive, unholy demigod on the cover). As you hear with a lot of Rotting Christ’s more recent work there’s a cleanness to the production and sound that contrasts with the roughness and extremity of The Magus’s rasping vocals, which is what characterises and sets Greek black metal apart from say, the Scandinavian approach to the genre. It’s all carried along by tight riffing, pummelling drums and some guitar melodies – such as those on ‘The Red Crown Turns Black’ – that wouldn’t sound out of place on an Iron Maiden album. The non-black metal influences trickle into other songs too, like ‘The Mantis’, which, despite its dark and forbidding intro, has some much slower sections and some chugging riffing that sound quite 80s-influenced.

Later tracks, such as ‘Hermetic Code’ and ‘Unborn, Undead, Eternal’, are similarly clean, melodic and perfectly executed, although they lack the directness and fury of the first two songs. ‘Tyrants’ features a brief echo of the same doomy stomp that hooked me on the band’s first EP. But there’s no return of the guest vocalist featured on ‘Sid Ed Djinn’, nor the massive doomy riffs heard on that track. This is a shame, as after the taster EP, these different sounds could be developed more on the new album. But instead, what we have in As The Flame Withers is a highly competent and flawlessly executed black metal album that owes a lot to more traditional heavy metal in terms of song structure, production style and guitar melodies.

It does retain some guttural nastiness in the vocal style, and some pulverising sections to keep the more extreme metal fans happy, but Yoth Iria could gain some listeners who otherwise wouldn’t try anything so, well … demonic. Try it for yourself: check out the LP, check out the EP. See if you agree. But either way, this is a damn fine set of songs and I look forward to seeing what Yoth Iria do next.