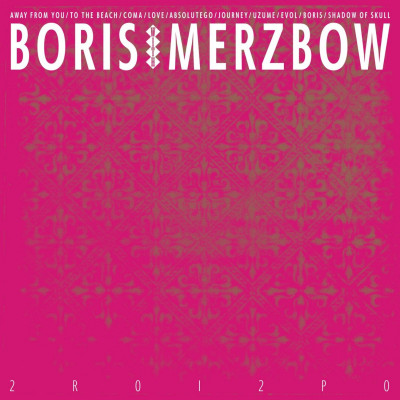 2R0I2P0 by Boris and Merzbow

They say that familiarity can breed contempt. I’m not sure if contempt is the aim of the game in this 8th pairing of Boris & Merzbow but there’s certainly a pugnacious streak burning its way through the heart of 2R0I2P0.

Boris have been more than capable of thwarting expectations of their collaborations. Whilst their joint effort with Sunn O))) sounded destined for earth-gouging heaviness it subverted assumptions by featuring soft nuances and quietly sublime melodies. Treading in similar footprints, then, is this alliance with renowned eardrum-burster, Merzbow. Rather than simply splitting our skulls in twain with an unrestrained sonic assault, the combo instead opt for carefully drawn out post rock guitar constructions. Their soaring sounds growing amongst click, clanks, and some serious shed rummaging. Divvying out the responsibilities hardly seems necessary as Boris plump for atmospheric jubilance beneath the clattering of Merzbow’s toolbox. It’s an approach of textures. The urge to overwhelm shelved… At least for the opener.

By the time we hit fourth track – ‘Love’ – however, the noise cometh. Twitching pulses, clanging metal sheets. Merzbow’s trademark scurrying digital ants clambering over one another, a thousand tiny insect voices shrieking. Wata (Boris’s guitarist) wails as they lurch through a sludge storm. It’s been mastered so that Merzbow’s discombobulating electronics take centre stage but it feels, on occasion, that this is to the detriment of the partnership. If Boris’s thunder was a little closer to the front, head-space-wise, this might allow for the sounds to gel a little better and for a greater interplay between the musicians. Unfortunately, the positioning of Merzbow’s noise trinkets at the focal point often gives the impression of someone noodling over the top of one of their favourite records. Even when Boris are unleashing at their most Dopethrone-era Electric Wizard levels, it still seems submerged beneath the scratchy squelches which, otherwise, could behave as an atrophying filter, updating the tracks with a haggard sheen that files away at the edges to give a sense of deterioration, a suggestion of time gnawing away. Perhaps it still does work in this manner. Just the erosion is much greater, much more brazen. Like Burial but it’s nought but crackle. It’s the final stage of The Caretaker’s Everywhere at the End of Time but the ailing mind is caught at a mid-2000s doom drone concert. The memory of which is now wrapped in a rasping web of furious digital signals, festering and sluiced through with a sense of uncertainty and increasing concern.

The notion that this is a misremembered concert is emphasised further on ‘Evol’. Distorted noise overshadows the yelped vocals giving the impression of shouting into a void whilst hanging from a feedback-riddled speaker. Buzzing and shuddering sounds overlap to disconcert the slow and quiet roll of Boris as the track picks up momentum. A schism at halfway is accentuated by Merzbow’s squall. This often appears like disconnected approaches but we should remember that this is hardly the first time that these noiseniks have paired up and it’s not long before they get into a right rollicking flow. Just absolutely pounding away at our defenceless ears.

The dissolution and degradation that comes with applying festering electronics over the top of crushing doom rock could also be read as a commentary on the climate crisis. After all, Merzbow recently worked with Christian Stadsgaard of Posh Isolation on a record titled Coastal Erosion which placed that problem at its very core. And, while there might have been a more pressing global emergency of late, it seems very unlikely that this issue would have just upped and gone from consideration.

In fact it’s Merzbow’s cacophony that often serves as the cement, linking one track to the next whilst Boris dish out the gargantuan Sleep/Sabbath-esque riffs that ram their way through the sonic blizzard. Rather than collaborative, it can feel quite combative. In the absence of live music, my mind wonders what the experience might be for each un-toured release. The set up for this one, in particular, mightily intrigues me. Would it be a competing and escalating charge for speaker space? Would one creative force yield to the other? Where Sunn O))) & Boris’s collab felt complimentary and respectful, this is a battleground navigated via a slim Venn diagram-shaped compass. I say we should arm up with noise boxes, pick a side, and let’s set about worshipping some amplifiers.