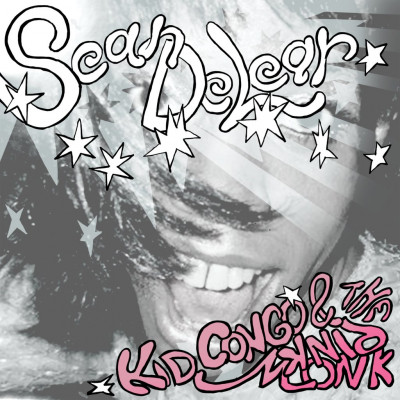 Hey kids, the Kid‘s back! It’s been a while. He’s got a new EP of groovin’ garage goodness with some songs about life, death and the slippery world of memory and dreams. Here he comes strutting on out of the desert in a pale pink linen suit just as cool as an evening breeze. Kid might be dressed sharp and have things weighing on his mind but he’s not to cool to bust a move or throw some shapes. His band The Pink Monkey Birds know all about shaking their tail feathers and so Swing From The Sean DeLear is an infectiously funky set that’ll have you toe tappin’, head noddin’ and finger snappin’ before you even know it.

Kicking off with the title track, ‘Sean DeLear’ is a rough and excitable stomp with some old school Iggy Pop swagger about it. The song is a remembrance and a celebration of a Los Angeles underground star. Sean DeLear was a non-binary, African American singer and scene fixture, by all accounts a force of nature and embodiment of the sort of subcultural vitality we’re all sadly missing these days, sat at home watching our screens. The band kick out the jams to keep the flame burning. Eventually ‘Sean DeLear’ wanders off into the night in search of further adventure and the tune unravels. ‘(Are You) Ready, Freddy?’ brings the full tilt rock ‘n’ roll freakout ending that it might have got. Apparently a staple of their live set it’s an overheated guitar riot, with occasional yells of the title, anchored by the pulse of its tight, elastic bassline and hectic, driving drums.

“We’re at the end of the end of privilege.” Now here’s something, Kid hasn’t gone in much on politics in the past but these have been some severely trying times for us all, ‘(I Can’t Afford) Your Shitty Dreamhouse’ is a righteous middle finger to the man. A traditional rock ‘n’ roll “fuck you” to an ugly establishment consensus of “racist, conservative… disgusting bullshit.” More than the increasingly impossible dream of a secure, affordable, home the dream house here is a particular vision of America. That sickly nostalgia for a better day that never was. I puzzled over the line “get your hair, out of my hair” but I’m now pretty sure it refers to the mysterious coiffure of the last President, whose time in office Kid seems to have sat out as a recording artist. All that fun and the tune is infectiously, unstoppably, funky into the bargain, clap your hands and chant along brothers and sisters.

The final track is an hallucinatory wonder. A loose Chicano groove that takes your hand and leads you into the dream space. There’s atmospheric flute breezing by through a kind of tough cocktail jazz. Kid pops up with an occasional spoken interlude. These concern a dream in which his friend and former Gun Club bandmate, Jeffrey Lee Pierce, wanders into his kitchen to pay a visit. Pierce has been dead 25 years but there’s no great revelation passed on or anything particularly eventful that occurs, just Kid’s warm sense of happiness in seeing his friend again that fills the whole track. About midway through the tempo picks up and the playing becomes a touch more dramatic but the magic of it is that it just kind of hangs there, a full 14 minutes worth of percolating sound without a big lyrical narrative or even really much in the way of musical development and yet it rolls by without ever dragging its feet.

It’s a joy and a surprise, which seems to be how Kid felt about the dream itself. This whole EP is solid greatness, really a spirit lifting tonic. It’s good to welcome them back, the band sounding sharp and limitless. Hopefully it means a new album is out there on the not too far horizon. In the meantime this will do just fine.