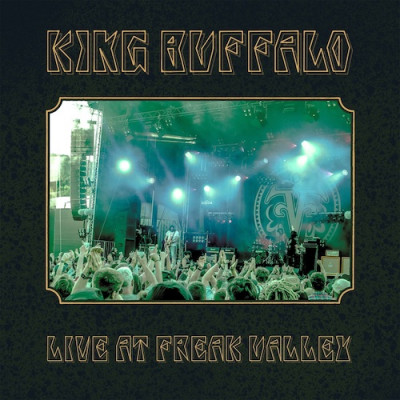 At a time when the dearth of chances to catch bands live is heart-wrenching, a good live album has become a thing of rare joy, a little glimpse into an energetic yesteryear and a tantalising taste of concerts to come. Festival series are often great examples of this format – a rich trove of performances to pick from, vibrant crowds and a sound quality that you won’t be hearing in your local basement any time soon. Freak Valley have delivered on this front time and again and their latest, a capturing of NY psych trio King Buffalo’s 2019 performance, ranks among their best.

‘Sun Shivers’ kicks things off in a relatively straight-up fashion, Scott Donaldson laying down a metronomic beat as Sean McVay coaxes his riffs out of hiding, peeking out little by little until they explode in a Technicolor rainbow of six-string awesomeness. They strike a curious balance of minimalism and maximalism, McVay’s voice a murmured presence that doesn’t so much sit astride his guitarwork than it just melts into it until they are just one, homogenous emanation, and Dan Reynolds’ basswork propels the brief movement forward with a confident assurance. It’s when they reach ‘Longing To Be The Mountain’, a siren call of new age synths paving the way for motoric rhythms and a gently undulating riff that rises and falls with the steady pulse of the tides, that the pull of King Buffalo becomes truly inescapable. The three lock into a huge, swirling vortex of sound, muted at first but with the progressions becoming ever more urgent and frantic as minutes pass, When they fully let rip, it’s stellar, Reynolds’ low-end undulating and popping as McVay lets loose one burst of guitartisty after another before sliding abruptly back into another blissed-out fugue.

There’s an easy focus as they slide into ‘Repeater’, picking up their earlier fuzzed-out sprawl and letting it simmer and bubble, McVay’s low intonation of “Every day is the same” delivered with the kind of living-in-the-now zen that the Buddha himself would have respect for. Reynolds provides a solid yet remarkably flexible spine for the band to settle around, mirroring Donaldson’s sharp precision but balancing it out with warmth and the occasional flutter of electronics, just to add a little dash of spice here and there. The three have always possessed the sense of being keenly attuned to each other’s conjurations but here, it feels more expansive, the drive less to create their own psychosonic universe than to create a unified space where they, the audience and, by extension the home listener, can merge and drift off.

‘Orion’ and ‘Kerosene’ build on that shared soundspace, with the latter’s bristling solo a triumph of tonal simplicity and blues-inflected classicism, but it’s closer ‘Eye Of The Storm’ that gives it the most defined aspect. The riffs melt and drip in space, languorous yet engaging, and when it hits its stride, there’s even something faintly menacing there. It’s remarkably nuanced and it can’t help but give you a sense of nostalgia, even if you weren’t there. It has the energy of all good live albums, of great concerts as a whole, and with a lack of them in sight it’s all the more important to have a record like this that can be thrown on, turned up loud and simply immersed in.