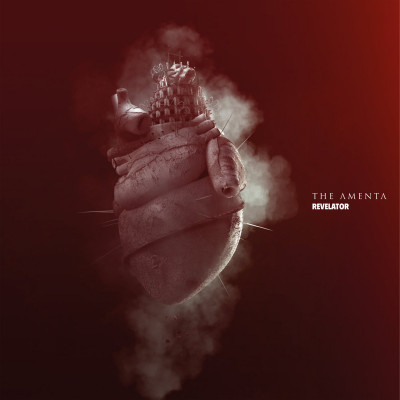 Revelator by The Amenta

The Amenta were and still are one of metal’s most interesting and diverse bands. Seemingly ripped from our world for seven long years it’s taken a lot of hard work and a pandemic for them to return to the light of day, bringing with them the long-missed sounds of their unique and filthy brand of earth-shaking, industrialised death metal and with them they bring a brand new album in the form of Revelator.

I’ve been a fan of the Aussies since their debut album, the blackened blasterpiece Occasus, released in 2004. The album cover, the band photos, the darkly named and to-the-point tracks (‘Erebus’, ‘Mictlan’ for example) and the demolishing soundwave of incredibly weighty, angular and destructive music were all delights to a young metal fan always searching for the most extreme sounds like myself. Follow-up albums, the cold and experimental n0n and the savage Flesh Is Heir broadened their musical horizons, defined their sound and journeyed further into the marriage of metal and machine. Needless to say, as a writer now getting to review a new album by The Amenta when I had assumed there would be no more is a great pleasure indeed.

Opening number and clever wordplay ‘An Epoch Ellipsis’ gnaws maniacally with a crushing introduction of blasts before the bleak desolation of a haunting cyber deviation cuts down the grind to reveal an expansive and exploratory sound that delves into just a glimpse of what’s to come. ‘Silent Twin’ is perhaps Revelator‘s most unique track forgoing any brutality for a brooding and dark acoustic number with a twisted industrial edge and a sinister theme lurking in its creeping and ominous notes. Cain Cressall’s vocals are the star of the show, captivating you from start to finish.

Bringing the pace back, ‘Psoriastasis’ is the mechanical behemoth of early era The Amenta dominated by pounding drum blasts, chugging, frenetic guitars and angular riffs, making this mini mosher by far the most brutal track. ‘Twined Towers’ is the album highlight and a masterclass in vocal theatre with Cain’s unforgettable voice gymnastics mesmerising throughout its 8 minute runtime until the epic closing moments. From the dramatic almost-falsetto harmonies to ghastly cries and horror-drenched rasps, this eerie soundscape becomes a living, breathing voice stuck in your head.

There’s a fascinating correlation between the last few tracks in the way they are named, with key words repeating… ‘Parasight Lost’ and ‘Wonderlost’ followed by ‘Overpast’ and ‘Parse Over’. ‘Overpast’ is another banger with brick-heavy skin beating, staticky ambient interference and down-tuned, growling guitar sections leading to a flurry of drum pedal mini-fits lashing aggressively. ‘Parse Over’ closes the album in a brooding and evocative way. Part deranged, part schizophrenic, beginning with discordant sound fuckery and launching into abrasive doom-bringing melancholy. The track is one of the more suffocating and dense of the nine yet carries you to the end with a sense of satisfaction, leaving you exhausted but craving another listen.

Revelator tears away preconceptions of the expected brutality of the death metal genre and instead explores the eerier side of the craft in an unexpected way. Perhaps genre labels are not important when music is as free-flowing and inventive as this. The Amenta can still blast and on Revelator they still use blast beats, but sparingly and to great effect, certainly leaving you wanting more. The song structures rely more on lengthy, bleak and immersive cyber soundscapes, thanks to Tim Pope’s atmospheric wizardry, with tracks infused with hammering industrial metal and more dissonant breadth than reached before. Revelator is beautifully quaking metal with a raw, mature and dirty edge.

I expected different but got so much more… a blackened onion with endless layers, nuanced to perfection. An album that absorbs you into its mechanised womb and keeps you safe in its blissfully disconcerting view of harrowing noise and devastatingly bruising music, wrapping you in a comforting embrace of everything you love about this band. The Amenta return a reinvented beast. Revelator is an inspired album, return and developed, fleshed-out sound from one of extreme metal’s most unique and unstoppable giants.