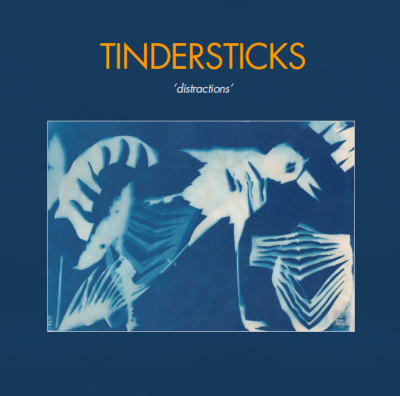 Confrontational is not a description that leaps readily to mind when considering the music of tindersticks. More likely you associate them with a world weary and weather beaten romanticism. Lived in suits, red wine and cigarettes, gazing dolefully out across the square from the café and turning over how it all went wrong. Regrets and dissolution, that sort of thing. Distractions takes the conversation to some surprising places via left turns and odd digressions making for their most fascinating record in a long while.

Within the context of such expectations the drum machine click and bassline roll of 11min opener ‘Man Alone (Can’t Stop The Fadin’)’ is a striking development. Both musically and lyrically it drops old song structures for something more open ended and their usual rich instrumentation is pared back to a supple minimalism. There’s no story, no destination, just onward motion. Curiously it still feels like tindersticks, beyond Stuart Staples’ distinctive voice which, even curiouser, finds itself falling into loops, echoing one another across the stereo field. A tired synaptic call and response. As this sinks in they even abandon melody as an atonal crescendo of distant traffic builds. It breaks giving way to a new mental loop, the beat is washed away by a storm and then the elements build back up again. Eventually it rolls on, leaving us behind with the sense it still has a long way to travel into the night. It’s perhaps the most experimental thing the band has ever done and yet it remains oddly intimate, like being told a secret.

For immediate contrast ‘I Imagine You’ is a tindersticks song of a particularly fragile and hushed sort. A cloud of singing saw and soft whispers of ghosts and lost hopes. It pairs up in feel with the penultimate track ‘Tue-moi’ a spare lament for the attack at Bataclan. Like some of the other tunes here, the pause brought about by lockdown has allowed it to finally come to fruition, Staples asserting that it always needed to be sung in French, something for which he had to find the courage of his convictions. Perhaps not merely for the linguistic challenge, it’s uncommon for his writing to directly take on events in the wider world.

‘You’ll Have To Scream Louder’ appeared last year as an immediate and pointed response to the state of things, a burst of feeling and frustration. A song from his 80’s roots bubbling back up on currents of political grief. Their version is not as discordant or loosely structured as the Television Personalities’ original, becoming sleeker with a surprisingly clean and funky guitar driving it along over a skeletal disco beat. Smartly, they do hang onto the unlikely dub elements that begin to dissolve the track in it’s later part though. Political songs you could dance to, I’m fairly sure this is new territory for the band as well.

The other two cover versions which form the centre of the album are back on the more familiar ground of loneliness and emotional turmoil. Neil Young’s ‘A Man Needs A Maid’ and Dory Previn’s ‘Lady With The Braid’ are both getting on for 50 years old and twist together threads of folk music and Hollywood to vivid ends. These are bold song choices with the band apparently having many years of attempts behind them. Confrontational might be stretching it but some people will have strong opinions about this. Their pairing here is surely no coincidence and sat nervously together they play out like two halves of a story. Both paint pictures of isolation, of a longing for human contact and the anxieties that come with that. Longstanding themes for tindersticks but certainly carrying some extra weight over the past year.

‘A Man Needs A Maid’ seems like an obvious choice as Young’s original combines confessional songwriting with the widescreen drama of the London Symphony Orchestra. After a minute or so of solo piano it shifts to a swirling cinematic atmosphere, the arrangement underscoring changes of scene and mood, maybe even gently mocking the song’s overwrought sentiment. Young’s use of the orchestra has divided opinion ever since. Still, solipsism and strings? That’s tindersticks’ home turf isn’t it? Maybe not, they open with a drum machine click and an odd metallic clank that runs throughout. Rather than embrace orchestration they drain the arrangement and slow it to a minimal pulse. This proves sweetly effective when Gina Foster’s vocals come in, allowing for an unexpected sense of hope in the final “To give a love, you’ve got to live a love” section.

For ‘Lady With The Braid’ things are warmer, a little fuller, strings dancing quietly in the background as Staples unwinds the lyric. It’s a tremendous piece of writing and Previn’s original vocal is a masterful performance full of incredible subtleties and careful phrasing, almost to the point of becoming a monologue set to incidental music. Staples keeps it conversational in that soft and soothing way of his, inclining a little more to the sense that the singer might be remembering or running through these thoughts alone. Where the original fades abruptly out they allow it an extended and fully developed coda of gorgeous mournful strings to pull on the sweet lonely ache of it.

How these versions will fare out in the wider world’s glare it’s hard to tell but huddled together in the middle of this album they work well enough. How indeed the whole album might be received is an open question. It’d be easy to take Distractions at face value and see it as a lockdown stop gap. Some unfinished songs, some experiments and a few covers, an odds and sods collection. In time it might come to seem an oddity or the start of a new phase for the band. If No Treasure But Hope saw a consolidation of sorts, a sensuous and sunlit regrouping of the tindersticks sound after a four year gap, Distractions sees a revitalised band carry that energy towards something new.

A balance is perhaps achieved on ‘The Bough Bends’ which bookends the album’s symmetry with ‘Man Alone…’ Another lengthy track with a flowing open form and loose narrative that it blends with a more familiar sound world and textures carried over from the previous album. Again beset by the sounds of a storm it also sparkles with bird song and has that soporific sweetness you were waiting for. It’s a human sound, that knows your loneliness.