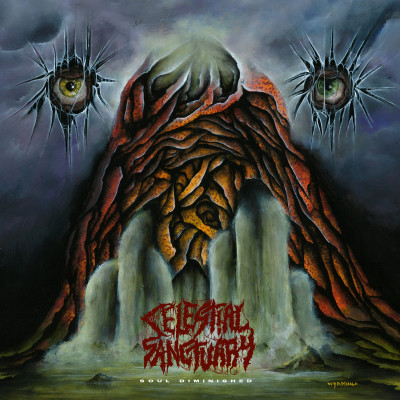 Cambridge, UK, is famous for many things – the gleaming spires, the annual boat race, the place where Pink Floyd were formed – but there’s never really been a Cambridge ‘scene’, definitely not a metal scene. Certainly, as a teenage metalhead in the late 80s we felt lucky to be graced by tours from anyone who’d come (Nuclear Assault’s Dan Lilker came on stage at the Cambridge Corn Exchange in 1989 and asked, “What’s a Corn Exchange? Seems like a pretty cool place to me.”) Other places – exotic ones, to me – were held up as the birthplace of various metal scenes – Bay Area, Gothenburg, Florida – but not Cambridge. So, a death metal band from Cambridge? That’s where Celestial Sanctuary come in.

Hailing the New Wave Of British Death Metal, Soul Diminished is the band’s full length since their formation in 2019. Their sound is unapologetically old school – I can hear a huge slice of Death in there – but it’s also very rooted in the present. Lyrical themes are “grounded and about real life” according to the interview snippet on their Bandcamp page, with this album being about a confined soul, one trapped by human trafficking or depression, and which is left open interpretation.

Opener ‘Rid the Gormless’ starts with a gnarly riff that sets up the song and indeed the entire album, and rattles along at a rapid pace. The caustic vocals of Tomas Cronin hold the whole thing together, his growls punctuating the rhythm of the track. It’s abrasive, thunderous and well put together: the rough edges are deliberate rather than being a product of poor production, as it might have been in the late 80s. This is what makes it sound quite modern: start of the New Wave Of British Death Metal, as the band put it. The recent release by Asphyx springs to mind, as a band wearing their heritage on their sleeve while also wanting to tear a hole in 2021.

Title track ‘Soul Diminished’ is a more mid-paced, complex affair, with a crushing riff interspersed by slower, menacing passages. The band use a slower, threatening sound to great effect on next track ‘Relentless Savagery’, which starts fast but segues into a death/doom thunder, the vocals taking on a tortured, melancholic air that reminded me briefly of ‘Where Hope Fades’ by Ataraxy.

This mixture of ponderously slow, aching doom with mid-paced riffing heavy enough to cave in your skull is used to great effect on later tracks. Both ‘Wretched Habits’ and ‘Suffer Your Sentience’ sound like a mixture of Candlemass and Death rolled into one. The thundering ‘Mass Extinction’, an album highlight, starts slow and thunderous before smashing through your speakers with a fast, thrashing riff. The quality continues. In fact, there’s not a weak track on the entire LP, and I particularly like the outro ‘Formless Entity’ with its haunting echoes and pounding drums that gradually are all that’s left before the fade.

With their debut Celestial Sanctuary have proven that these Cambridge boys can make a rock-solid death metal album that holds the interest, varying the pace and tone in an absolutely crushing bunch of tunes. With this much talent on display at the outset of their careers, who knows what they can achieve? Well worth a listen!