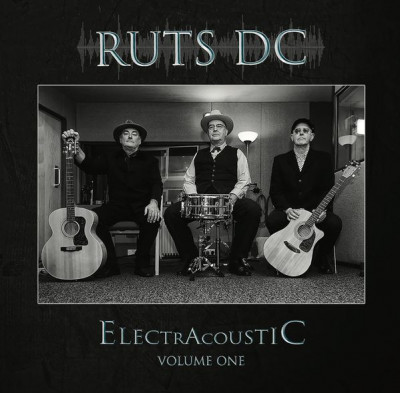 ElectrAcoustiC: Volume One by Ruts DC

The early history of The Ruts has been well documented, one of the outstanding bands of that period their first single ‘In a Rut’ came out in 1979 on People Unite followed by ‘Babylon’s Burning’, ‘Something That I Said’ and ‘Jah Wars’, the latter three appearing on their debut album The Crack. The album was an insightful look at urban Britain, the tracks ‘Babylon’s Burning’, ‘Jah Wars’ and ‘S.U.S.’ especially incisive in their use of social commentary as resistance.

The Crack showed that, with an eclectic musical knowledge and exceptional musical ability, the original promising synergy of punk could still be a potent force with short sharp songs like ‘You’re Just A’… alongside ‘Jah War’ and ‘It Was Cold’, both coming in at over 6 minutes long. Running through the album is a sense of tension and social commentary that reflected urban Britain in the late 70s but (unfortunately) is also extremely relevant to 2021 as the UK continues to be plagued by racism, scapegoating and class war under a far right Tory government. In March 1980 the band released their fifth single ‘Staring At The Rude Boys’ but then in July, following a struggle with heroin addiction, lead singer Malcolm Owen was found dead. A sixth single ‘West One (Shine On Me)’ was released in August. In two years The Ruts had released six singles and an album that set a new standard in punk for musicianship and lyricism that has rarely been equalled since. Virgin put out another album Grin and Bear It, a mix of live tracks, B Sides and the last two singles.

The remaining three members of the band, Paul Fox, ‘Segs’ Jennings and Dave Ruffy felt they should continue and became Ruts DC releasing Animal Now in ‘81 and Rhythm Collision in ‘82 before calling it a day in 1983. And that appeared to be that until 2007 when the three members reconvened for a one off benefit gig for Paul Fox (who had been diagnosed with cancer) with Henry Rollins as lead vocalist.

However things evolved, Segs Jennings and Dave Ruffy worked on some tracks together which eventually became Rhythm Collision Vol. 2, in 2014 a live album followed. And then in 2016, with Leigh Heggarty on guitar, Ruts DC released Music Must Destroy, a rock album of such extraordinary quality that Viva Le Rock made it their Album of the Year.

In early 2014 Ruts DC started playing acoustic gigs, evolving the concept, which included gigs at Rebellion Festival, over the next few years. At Rebellion the acoustic set grew in popularity and in 2019 it was moved to a bigger venue.

And maybe that’s why the album, ElectrAcoustiC Volume One, works so well, it’s a documenting of something the band were already doing. It’s the sound of a band revisiting their past as more mature people, bringing the skills and wisdom accumulated in the intervening years to a fresh presentation of that material. It’s also a reminder that the power of The Ruts/Ruts DC songs has never relied on volume but on good songwriting/musicianship, incisive observation and laser sharp lyrics.

If anyone was worried that ElectrAcoustiC Volume One was going to be the sound of old punks settling down and mellowing out they can rest assured the songs on here are just as taut, tense and relevant as they have always been. This isn’t some laid back rehash for nostalgic old punks to listen to while they clean the car on a Sunday morning, this album means it. No lazy escapism or nostalgia here. That’s the thing about The Ruts/Ruts DC, they don’t let you forget that punk, at its best, had always been about social commentary, about protest, about believing another world is possible before that was even a phrase.

Punk has always been a multi voiced genre, a musical movement marked by contestation, and in the talking heads history of punk its antecedents are often cited as New York Dolls, MC5, The Stooges, however this album highlights the roots of one stream of punk as being in the tradition of (often) acoustic protest music like Phil Ochs and Bob Dylan, Segs commenting that the “(a)coustic Punk ethos goes back to Woody Guthrie and, of course, the blues men before him”.

The semi unplugged format of ElectrAcoustiC Volume One puts the lyrics at the front with nowhere to hide, a situation they cope with easily, the stripped back format really emphasising what good wordsmiths they’ve always been.

OK so what’s on the album? A collection of tracks taken from The Crack, Grin and Bear It, Animal Now and Music Must Destroy.

Tracks 1 and 3 are the title track from Music Must Destroy which really should have us out on the streets, lyrically skewers late capitalism and ‘Kill the Pain’, every time I hear this it resonates; brilliant song. Sandwiched between the two is ‘Dangerous Minds’, still tense, fraught, relevant. After ‘Kill the Pain’ there is a string of great earlier songs ‘In a Rut’ ‘West One’ ‘Something That I Said’ and then fast forward to ‘Psychic Attack’ (MMD) and then ‘Walk or Run’ (Animal Now) and ‘Soft City Lights’ (MMD) before they finish with ‘H Eyes’ and ‘Babylon’s Burning’. Despite the personnel changes and the 37 year time span between ‘In a Rut’ and MMD the album has a sense of coherence and continuity of belief and values, it feels like a coherent body of work rather than a collection of stand alone tracks. So, basically the headline is, ElectrAcoustiC Volume One, 11 amazing tracks that, while being re-presented, retain all of their original energy, tension and urgency. Made me think again just how important The Ruts/Ruts DC are.

It sometimes feels that early punk has been explored and analysed to exhaustion but with this album the band have shed a different light on the songs, giving us a slightly different angle, a new appreciation, the different format a reminder of what great songwriters the band have always been both musically and lyrically.