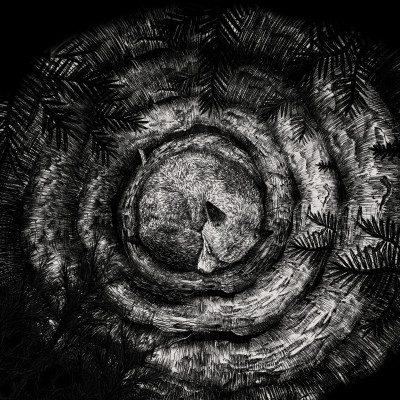 Vindsval is the enigmatic and many-tentacled beast you may know mostly from French purveyors of darkness and oddities, Blut Aus Nord. He is a prolific man indeed and one who seems to always create, pushing the boundaries of any preconceptions within the genre and experimenting with the many ways sound can inflict horror upon the ears. Named presumably after a track on Memoria Vetusta III: Saturnian Poetry, Forhist is Vindsval’s newest project and one that strips back on too much complication, instead focusing on classic blizzard-cold 90s black metal with a modern edge. Whilst Blut Aus Nord can have the odd straightforward album the bulk of the music is progressive and mostly consists of repetitive, dissonant beats, unnerving atmospherics and grim nightmares, something that is far removed from this album. Self-titled debut Forhist is a more frostbitten and intimate expression of art, but savage nonetheless.

Eschewing track names for simple numerals, the album begins with ‘I’ and the delicate sounds of nature, a theme which is interwoven throughout the album and acts as a nice contrast to the more in-your-face savagery of the music. A salvo of barraging blastbeats breaks through the peaceful ambience with blazing tremolos flailing and grand, ceremonious riffage that eventually melts into a breakdown of synths and frosty guitars. ‘II’ quickly unleashes a bulldozing stampede of drum blasts and immediately cuts deep with sharper riffs, scythe-like in ferocity and in a similar vein to the terrifying, cavernous tremolos of dense avant-garde metal music. The rest of the track heads down a groovier path with marching beats and drum rolls, some distant guitar cries and choral voices that see out the track to its end.

The two shortest tracks are ‘III’ and ‘V’, with the former being a snappy rager of fiery riffs and unrelenting, attacking blastbeats. The latter is a gorgeous little track, short and gleefully sweet, it builds on slow riffs until a mid-point crescendo injects a quick burst of venomous, hissing tremolos and storming drums. Catchy and caustic! Final track ‘VIII’ unleashes a whirlwind of soaring guitars and epic riffs that push the listener face-first into a cold, sharp blanket of battering winds, evoking all things ice-blasting and immemorial. Like most tracks on Forhist the heavy, frenetic part is usually confined to one half with no repeat further down the line and that theme recurs here one last time with the album closing on a slowed, epic way with measured drums and lamenting guitar tremolos.

Forhist is not just some tribute to eras past but rather an in-depth understanding and immersion of that age of black metal that somehow still feels fresh and personal to Vindsval. Drums are brutal, crisp and as fast as you’d like a BM album to be… guitars are cutting, hook-laden and skillfully played… vocals are rightfully incomprehensible and often lost in the mix but this somehow adds to the mystique and evokes a mental image of darkness and gnarled, snowy branches, as if you are searching for his voice amongst the timeless bark, following endless, confusing footprints in the white, carpeted forest floor.

Forhist is a dark walk deep into the savage woods of traditional 90s Nordic-style metal, filled with lightning blastbeats, razor-sharp guitar hooks, 90s synths and memorable tracks. It’s traditional, but Vindsval hasn’t lost his avant-garde lust, which can be heard within a lot of the guitar riffs making this more than just a straightforward 90s throwback. It’s a nostalgia-filled ride with enough interesting nuances to assert its uniqueness and has all the power to become a classic in years to come… and if you needed more encouragement to grab this album… just look at that cute little fox on the cover!