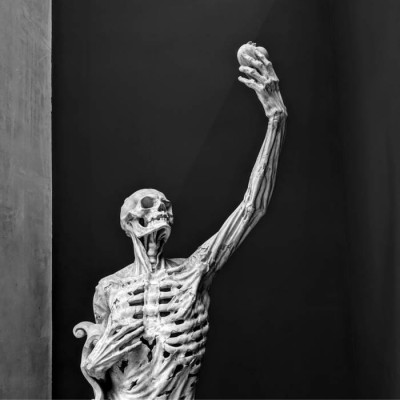 The Cadaver Tomb Pt.1 by Poly-Math

For some this will be a new discovery and for many it’s a highly anticipated return of what I guess by now you could call a cult band. Once a part of the, now very dead, math scene, Poly-Math have managed to reinvent themselves in recent years expanding into more prog and in this release electronic territory. They always were one of the few math bands that were fun to watch live as well as being good, Joe’s electrocuted bass flailing a centrepiece of their often banana-beset performances.

However, the key thing, I wanna express here is that if you came as an old fan, this album is totally different and if you’re new to them, don’t let the name fool you, they’re not just another shitty math rock band aping the same handful of great artists. They were always better than the horde of copycats that have clung onto that genre five-plus years after it was played out. I’d extend the same to post-rock and whack another five years on there.

After keyboardist Josh Gesner joined the band, I think it was around 2018, the band found a major catalyst for change, another instrument means greater freedom of arrangement, but it also comes with new musical influences and connotations. At first, the band seemed to go more proggy in a The Fierce and The Dead kind of way and that proved to be a compelling and satisfying direction for them. However, it still felt a bit safe, like they were poking a toe out of the chin-stroking chasm of the ArcTanGent scene. Finally, with The Cadaver Tomb Pt.1 it feels like Poly-Math have totally reinvented themselves and have made something that is not only great, but is totally unexpected. Sure, it’s kind of a meme with guitar bands that when they “evolve their sound” they bust a bunch of synths out, but realistically it does change the timbre.

‘The Cadaver Tomb Pt.1’ opens the album, it strongly reminds me of ‘Leder’ the opening track from Teeth of The Sea’s master, the guitars are really cool though. It’s a mind-fuck to think ‘I Will Fall Against You’ is a Poly-Math song. It sounds like Moderat. The vocal melodies from guest vocalist Pete Lambrou are great. I love the bass in this song, it always was a hallmark of Poly-Math’s sound. The keys and guitar really step up as the track reaches a disorientating euphoria. Sounds like they’ve been taking a lot of pills…or MDMA. Someone book them for Field Day. The thing is that having vocals allows the songs to have clear meanings and endearing thematics as well as catchy hooks and all that stuff really makes ‘I Will Fall Against You’ stand out as single-handedly the most memorable track Poly-Math has ever made. That’s not to say a band can’t make you feel without vocals, what Echoes and Dust writer has not succumbed to the realism of Godspeed!, the joy of Cleft or the sorrow of MONO? It’s just to say that words convey clearer meanings and vocals make for an often catchier top-line melody.

‘Iso 3’ is a perfect example of a catchy and memorable instrumental track, there’s a clear top-line melody that reminds me of Battles and Oneida with its fun and friendly high-squeeling tonality. I don’t feel confident guessing who’s playing it or on what cause for all I know it could be a mic’d up cheese string with a fuck ton of pedals, but it sounds great. My sleuth-like detection skills make me wonder if ‘Iso 3’ ‘Iso 7’ and ‘Iso 2’ are part of a larger collection of similarly titled tracks to be featured on part two of The Cadaver Tomb. Also, are we supposed to see this like Kill Bill, where despite the separate release once both parts are out they can never be experienced separately again? Food for thought…

One thing I find interesting about this album is that it’s very chill, it’s kind of like Capac in places, Poly-Math gigs historically have always seemed to have a lot of energy to me in the past, with just some brief pre-crescendo breaks thrown in for contrast. Here it seems they’ve flipped the proverbial switch. ‘Minitrue’ and ‘Iso7’ largely seem to focus on building a solid wall of vibes. There’s a similarity to the likes of Four Tet and Autechre here, that is formed the tracks’ dance/techno-infused ambience. ‘Iso7’ has amazing lead instrumentals at its conclusion, I’m uncertain as to whether it’s a guitar with an e-bow or a synth with the pitch wheel being flicked around. I like how the track chops out with the samples, some really clever production there. The album generally sounds really nicely polished and it may surprise people to know that it’s self-produced. Personally, I find that extremely impressive.

‘Undone’ sees the band foray into dream pop with Kerry Ramsay’s vocals providing consistently soothing and ethereal vocals over the band’s electronica soundscapes. The glitchy percussion stands out on the track and actually made me realise that I don’t know if there were any live drums or if it was all programming for this album? I wonder if that was due to being unable to get into a studio to lay down tracks due to the pandemic? It certainly helps to set the album aside from their previous releases. I guess they could also be processing and integrating a live kit, but the fact that I’m questioning it says a lot about how well it’s been executed. The sampling on the album adds a good level of consistency. I like when albums are largely or completely gapless, reminds me of Bob Ezrin’s work.

‘Iso 2’ closes out the album elaborating on the mystique of the penultimate track, I really hope that Pt.2 of the Cadaver Tomb is gonna allow us to stitch all of these tracks together. I’d encourage listeners to play ‘Iso 2’ and then ‘Iso 3’ and speculate over it. I wonder if this is what Poly-Math wanted all along? They’re certainly looking to keep their fans on their toes.

Overall, The Cadaver Tomb Pt. 1 is a well-executed reinvention for Poly-Math that will leave listeners wanting to see what comes next. ‘I Will Fall Against You’ and ‘Iso 3’ stand out as landmark tracks for the band that I’m already squeezing into playlists and if you’re looking to take a cursory, first dip into Poly-Math, after following our coverage, I’d suggest you start there.