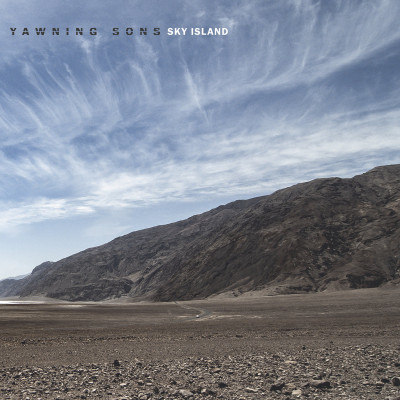 Yawning Sons combine musicians from Yawning Man, Sons of Alpha Centauri and elsewhere for the laid-back three quarters of an hour excursion that is Sky Island.

Where Yawning Man tends to present simultaneously epic and meditative desert instrumentals, this has a similar atmosphere but is more rooted in traditional rock. So much so that early touchstones that occurred to me on the first listen were Robert Plant’s bending singing notes on ‘Low in the Valley’, and then some harder to define Pink Floyd atmospheres on the next track ‘Cigarette Footsteps.’

It’s slightly unexpected that the most prominent initial aspects are vocal: I don’t tend to reach for the works of musicians like Gary Arce, Mario Lalli and Scott Reeder for the lyrics or singing (exhibit A: Kyuss’ ‘Demon Cleaner,’ a monstrous driving riff paired with lyrics about brushing your teeth). So to be brutal it’s a bit of a turn-off hearing them so prominently, especially when they kick off with such silliness as the couplet “I am a lover of treasure/I am a diver for pleasure” in the otherwise relaxed spaciness of ‘Adrenaline Rush,’ and something about a mystic girl and some daft “beep beep” vocalisations on ‘Gravity Underwater’ towards the end of the album (literally, they say “beep beep” every so often. Zany).

But looking beyond this, there’s good measures of both chiming and chugging in the peaceable riffing, and the second half of the record backs off a bit. There’s still a bright chorus around here and there, with Wendy Rae Fowler’s vocals lending an almost new-wave-y sparkle to the upbeat ‘Shadows and Echoes,’ while the more expansive mood prevails on the reverb-drenched, watery introspection of ‘Passport Beyond the Tides’ and especially the easy shimmering haze of the closing track ‘Limitless Artifact.’

Overall the smoothed-off edges and sungazing feel remind me most of all of the deadpan brilliance of Reality’s Welcome to the Western Lodge. While this album doesn’t quite match that album’s inventiveness nor its pop hooks, it’s an accomplished if variable outing, the highs offered by Sky Island still getting pretty high.