(((O))) Interview: Automb and the Laws of Chaos 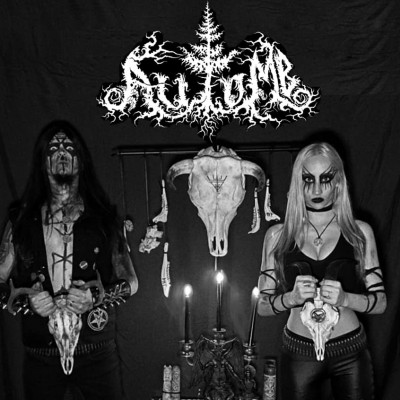 For this particular record, it was focused on the destruction of the worlds and all creation and how those said cultures viewed that. Some songs are based on certain deities which happen to be gods of death and destruction.

Life sometimes catches up with bands and writers alike. Automb split up shortly after this interview was completed. Danielle Evans is continuing with a solo project, named Stridskvinna. Serge Streltsov has started his own band, named Selfgod. Yet, the album ‘Chaosophy’ stands as a great record, unfortunately without a follow-up in the future.

Black metal is and always has been a genre revolving around the darker themes. Dark has many faces and by now we should know better than to consider the dark evil because some forces in the universe just are. Automb sees this clearly and pays homage to one of them on their album Chaosophy.

Without chaos there is no order and vice versa, it’s one of those facts of life we sometimes forget. Without restrain, there is no freedom either. Yet, limitations of our time hit bands hard and Automb is one of those. Their album is an absolute gem and worthy of recognition, but without the ability to tour and promote a record, not much happens. Luckily, I received a copy of the cassette release through Knekelput and discovered the powerful, yet compact and focused sound of this band. Originally a side-project next to Necrophagia for band member Serge Streltsov, now the band from Pittsburgh, Pennsylvania is the focus of him and comrade in arms Danielle Evans, supported by drummer Scott Fuller (Morbid Angel, Annihilated).

Even better, they were willing to answer some of my questions, which I hope you’ll enjoy. Thanks to Serge and Danielle for their time.

E&D: First, how is Automb doing and how have you been treated by the global pandemic? Did you have many gigs fall through or did you manage to salvage something from this period?

Serge: The pandemic has been tough for us the same way as it for any other band. We had to cancel tours, but luckily got to play 2 gigs during it. Other than that it’s been a very slow year for us. All the time went to writing the new album.

E&D: How did Automb get started and what are your musical backgrounds (and how did you arrive in the realm of black metal)?

Serge: Automb was originally supposed to be my black metal side project back when I was playing guitar for Necrophagia. I had all this material that was basically ‘too black metal’ for Necro and plus I always played stuff like that prior to Necrophagia.

I started playing guitar at 13 and drums at 16. I’ve been into metal since I was 8. I got into black metal in my mid teens after being into death metal for some time. It was the next logical step. Then years later me and Danielle wanted to make our own band so all the pieces fell into place. After the passing of Killjoy and Necrophagia being done, Automb became a full-time project.

Danielle: I started playing the guitar when I was 9 and fell in love with it. Then in high school, I went on to play in a program called “School of Rock” that had students learn classic rock songs and then perform them together at shows, which was awesome. That really gave me the confidence I needed in my guitar skills, as well as vocals. Then in college, I received a minor in music and learned tons of theory and classical guitar. Then in my second year of college, I met Serge and we formed Automb. I got into black metal in high school and Automb was the first band I was ever in so it was the first time I actually played black metal, aside from learning covers prior to that.

E&D: This year, you’ve released the fantastic Chaosophy album, following the 2018 release of Esoterica. What happened in the time in between in ways of band development?

Serge: We wanted to progress and improve songwriting. Our goal was to focus on the aggressive side of the material that was successful on ‘Esoterica’. The objective is always to outdo the previous record. So we focused on the things we do best.

E&D: So, tell me about this album; its concept, creation, recording, warts and all?

Serge: The idea was to focus on the darker side of spirituality in this concept. We wanted to focus on one side rather than representing many points of view like on the previous record. But yet still within this concept which is ‘Chaos’ we got to include interpretations from many different cultures, For those of you that heard Dissection’s Reinkaos know what we’re talking about. It’s our pagan take on those ideas.

Recording took place in two studios. Me and Danielle recorded in our home studio and Scott worked in his. We live very far from each other – he’s on the whole other side of the country. So it wasn’t possible to work physically together. We worked through demos and phone calls mostly.

E&D: One change is your label, how did you end up at Witching Hour Productions and how’s that been for you?

Serge: Once our time was up with our previous labels we decided to seek a new one and Witching Hour ended up being the best option plus we were already fans of the label and the bands that are/were on it.

E&D: You’ve also ended up releasing Chaosophy on cassette at Knekelput Recordings, which is what I have in my possession and it looks great. How did that come to be and are you pleased with the result?

Serge: We originally thought our previous cassette label was going to release but they went out of that sort of business and couldn’t do it. So we started looking around for the best cassette label we could find. After reviewing our options, Knekelput ended being the one. We were blown away by their cassette designs and thought it was very unique.

E&D: You draw inspiration from various traditions and cultures, you’ve said in other interviews. Can you tell me a bit about what you look for and maybe share some examples of ideas or philosophies you take with you into the songwriting of Automb?

Serge: Basically what we said in the previous question. Chaos philosophies from many angles of the world. Left-hand path side of paganism.

E&D: When I look at the lyrics, I see many cultural/religious references. In a way, it feels like a cultural-religious smorgasbord. How do you approach the process of using all these in your work and what is your method of gathering information? Are you avid readers?

Serge: A lot of it was stuff from commonly known mythologies from different cultures. Slavic, Germanic, Hindu, Egyptian etc. We are definitely big readers and researchers of all things ancient. For this particular record, it was focused on the destruction of the worlds and all creation and how those said cultures viewed that. Some songs are based on certain deities which happen to be gods of death and destruction. From a spiritual point, it was just a collection of Chaos Gods. There’s definitely a certain left-hand path Cult that follows exactly that. A lot of that is covered by, once again, Dissection. Who influenced that particular concept a lot and this record is dedicated to the memory of Jon Nödtveidt.

E&D: Your logo represents organic/natural forms, which were strongly represented on your previous album, yet this seems to be slightly different on Chaosophy. Is that still a part of your inspiration and in what form?

Serge: Everything we do is interconnected. The logo represents the world tree Yggdrasil and its roots which one of them is in Ginnungagap ‘Chaos’ There’s no Chaos without life. The logo represents life and death. Which in the songs ‘Trishula’ and ‘Ragnarok’ on the new record we talk about renewing the creation through destruction. Another meaning of the logo is the name Automb in general. It is a combination of the words ‘Autumn and tomb’ which represents the season of death that is Autumn. But it is a temporary death from which everything returns renewed.

E&D: There has been much ado in recent years about ‘female-fronted’ as a term to define certain bands. That has seen a major shift (for the better I think) where we stop segmenting in that way, how do you feel this has changed? And are there still struggles with acceptance for you as an artist?

Danielle: I personally do not mind that title so much because it is just a reality. A female-fronted band is still more rare than another band with all guys in it, which has usually been the case in metal, especially extreme metal. I think it becomes an issue when that’s the focus or the only reason why people listen to us. If a band is female-fronted and good, then awesome if there are male fronted and good, then awesome. It should not be completely about the gender of the vocalist, it’s about the quality of the content.

E&D: I very much enjoyed your album, so I’m curious what future plans there are, like tours perhaps across the pond? Obviously, as soon as this global pandemic allows us a semblance of normality.

Serge: Glad you enjoyed it! Right now we are in the works of doing a live stream. Besides that, we are also working on album #3 and yes once the pandemic is over we are going to tour. We already have plans for a North American tour to start. But obviously, no one knows when it’ll be allowed so everything is mostly ideas. For Europe, we already had a festival appearance rescheduled for summer 2022.

E&D: I enjoy asking this final one: If you had to describe Automb as a dish, what would it be and why?

Serge: We have no idea haha. Never thought of that before!