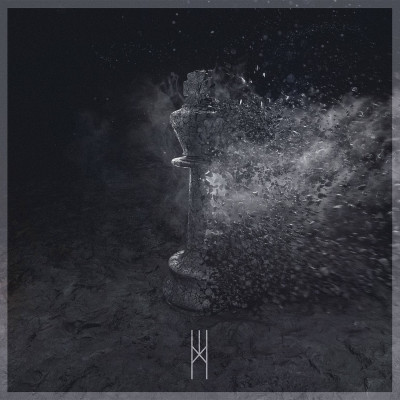 The End of All Things by CROWN

CROWN are a slippery beast. Experimental in the extreme, the French duo have developed a knack for bucking off any label given to them, while still managing to craft a sound that is intrinsically their own. Comprised of David Husser (who has worked with the likes of Peter Gabriel and Depeche Mode) and Stephane Azam (former sound engineer for Alcest), the band started out life in 2011 as a Godflesh-inspired Industrial band, with an “absence of real drums” – the band have largely used a drum machine, but don’t hold that against them. However, it was 2015’s Natron that first brought the band international attention, including a slot at Damnation Festival in Leeds. A far more diverse affair, it ran the gamut from sludge metal to darkwave, firmly setting CROWN out as one to watch.

If Natron caused ripples, The End of All Things looks set to cause a tidal wave. It takes everything good about Natron and builds it – the luscious soundscapes of static atmosphere, ranging from metal to electronica and sprinkled with Azam’s cold, detached yet oddly inviting vocals. Indeed, it is the vocals that are the star here – at times reminiscent of the laidback melancholy of Katatonia’s Jonas Renske, at others the gothic histrionics of Fields of the Nephilim’s Carl McCoy, and at other times channelling a shrieking beast. There are few growls here, and unlike previous efforts few guest vocalists. Instead, this is a band dedicated to crafting a cohesive collection of unsettling, yet strangely enigmatic soundscapes – a far more curated experience than previous albums.

Opener ‘Violence’ is as good an ambassador for the album as any, with a sinister emotion layered into its dark muddy synths. ‘Neverland’ is faster, but not by much with its eclectic drumbeat crackling with tension. ‘Shades’ is a different beast altogether, the kind of track that would not sound out of place in a Berlin clubhouse if not for the hissing growls. Yet, somehow, it manages to fit entirely within CROWN’s disconcerting universe.

Elsewhere, the crawling baseline of ‘Nails’ creates one of the most unsettling instrumentals in recent memory, particularly when given the context of the opening, somewhat psychotic spoken-word sample. Its no wonder the sweeping vistas of ‘Gallows’ are needed to bring a little levity. Meanwhile, the acoustic build of ‘Fleuve’ brings a bit more warmth to proceedings, which is immediately burnt away by the tortured rasp of the creeping ‘Firebearer’.

The record is brought to a close by the soulful ‘Utopia’. Featuring the one guest performance of the album, that of Karin Park of Årabrot, it ends the album on a hopeful note which seems somewhat at odds with the darkness that has come before. That said, perhaps that is precisely what is needed to provide some relief from such a disquieting collection of songs.

Yet, for all the darkness on show, for all the creeping dread the album instils, The End of All Things is an utterly beguiling record. There’s something hypnotic in the panic inducing creep, something primal and indecipherable that CROWN have tapped into. The End of All Things is not an album for immediate satisfaction, yet it is the kind of album that leaves a sinister terror that sticks around long after the last static hiss has faded from the speakers.