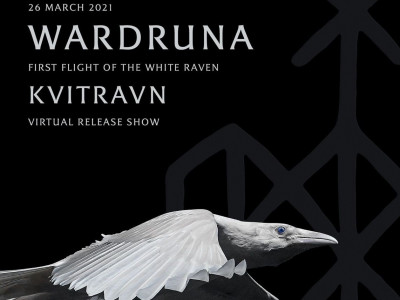 Speak to anyone who’s seen Wardruna live and their account will be full of adjectives like “transcendent”, “majestic”, “magical”. The talents of Einar Selvik, Lindy-Fay Hella and their troupe of neo-pagan/-folk musicians combine to fill concert halls world-wide, in easily the most powerful example of the genre around. So it wouldn’t be fair to pretend that a live concert stream, watched from home, was ever going to completely recreate the live experience. And I won’t. Better, then, to approach this as the release of something new and worthy, irrespective of the fact that the pandemic forced it into existence. Once you’ve accepted that – and got the sound up, the candles on, the incense burning – you’re in the right place to appreciate First Flight of the White Raven for what it is: a beautifully shot concert film that showcases Wardruna at their finest, in rich detail.

The stream begins with Einar Selvik in interview discussing the themes of the new album Kvitravn, unleashed into the wild here. Providing a now familiar introduction to the core values and aims for the Wardruna project – emphasising their desire to help listeners reconnect with nature, the desire to forge something new from old ideas rather than to recreate the past – Einar still seems a little sad that they could not play live in 2020 and release the album as intended; but, nevertheless, they’ve clearly thought hard about how to “challenge the format” of the live stream. One of the challenges, for him, is how to enjoy performing their songs off the stage, and I’m pleased that Einar feels the stream has helped him connect to this material differently. He suggests that, if Wardruna helps listeners to revitalise “a sacred sense of the Earth” and of the natural world, then perhaps this is a suitable time for the stream after all, given that so many of us have found more time during lockdown to explore our local, natural surroundings. 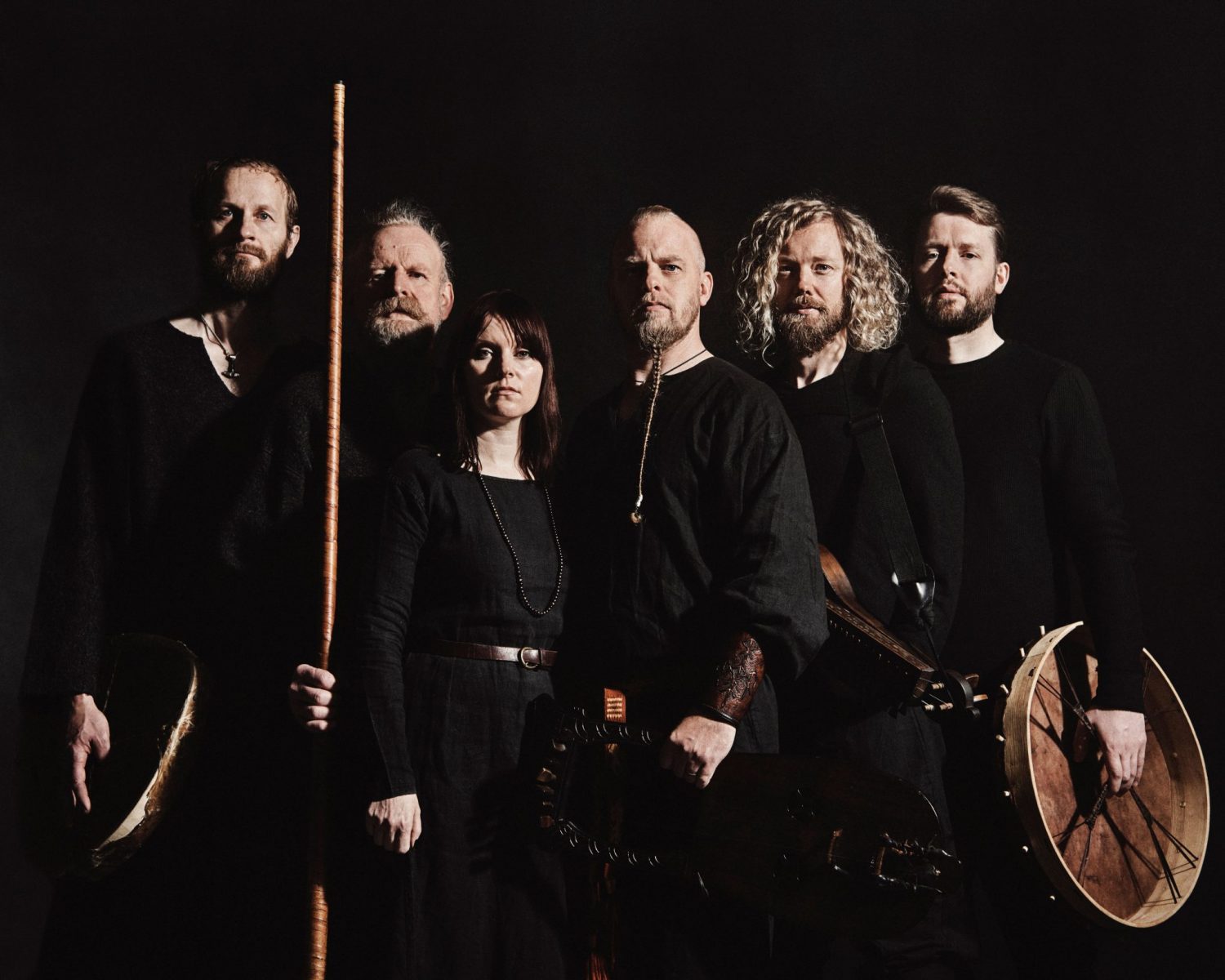 The performance begins powerfully with the title track of Kvitravn, familiar as the album’s lead single, with its beautiful video, showcasing the bleak beauty of the Norwegian landscape. Clearly arranged on a simple stage, Einar and Lindy-Fay are joined up-front by newcomer Katrine Stenbekk (familiar for her band Kalandra’s popular Youtube cover of ‘Helvegen’), with stalwarts Arne Sandvoll, HC Dalgaard, John Stenersen, and Eilif Gunderson (he of the huge birch trumpet) behind. Everything is tastefully lit in sepia tints, emphasising shadow and silhouette. We hear plenty of tracks from the new album of course – ‘Gra’, ‘Vindavlarljod’ and more – but this is more of a greatest hits stream with new album highlights, rather than an album playthrough; and yet there is still a sense of narrative, a journey in sound.

One thing that’s great about this film is seeing the detail of all their instruments, lovingly hand-crafted from bone, wood and skin – the silver birch percussion on ‘Bjarken’, the ornately carved tagelharpa on ‘Fehu’ – which you wouldn’t be able to make out in quite as much detail from in front of a stage. The amount of dedication that goes into all aspects of Wardruna – Einar really has made it his whole life – warrants the extra attention that such a stream enables. Also, you can really get to know their songs – seeing who performs which instrument, which produces each sound (not always obvious), and appreciating the complexity of these carefully-crafted songs. Over the last year, I’ve watched live-in-the-studio iPhone streams, solo keyboard warriors plugged into Twitch, live gigs with no audience, live gigs with distanced audience, impromptu Facebook guitar jams, guerrilla outdoor shows in both practical locations (gardens) and more exciting ones (medieval ruins), an elaborate performance in a church (Behemoth), and less elaborate but professionally-shot concert films such as this one. (I even attended one glorious gig at the Black Heart, out there in the Real, through embarrassingly tear-stained vision.)  First Flight of the White Raven reminds me most of Enslaved’s Cinematic Summer Tour 2020: just the band performing on a large professional stage, well lit, well shot, with no need for embellishment or gimmick – apt given the close ties between Wardruna and their fellow Norwegians. The lighting subtly shifts sometimes, changing the scene: a blanket of mist billowing around the band during ‘Fehu’, as waist-height lights trace lines between them in all directions, and they’re cast as tall silhouettes, with moody sunset tint for ‘UruR’.

Warduna’s latest opus, Kvitravn (White Raven) has yet to strike a fire inside me in quite the way that Einar’s Runaljod trilogy does (three flawless albums is a tough act to follow), yet this new record distils everything that we know and love about Wardruna into another fine and richly layered album. It’s a bit tough hearing these new tracks “live” for the first time through hi-fi speakers, rather than the giant PA at the Royal Festival Hall, as I would have last year in London – but still, damn they sound good. As with any band, I guess, I often don’t feel I really fully get new Wardruna tracks until I’ve experienced them live, seen them performed. Well, one thing I take from this stream is a revitalised appreciation for the new album; there’s an enhanced real sense of Wardruna as a choir, with vocal layers expertly arranged, unusual vocal timbres, wide ranges, unique characters.

I must admit I was hoping that this stream would be a little more like an extended Wardruna music video, interspersing the majesty of the Norwegian landscape with the performance footage. But, adjusting my expectations – I mean, that sounds pretty expensive – First Flight of the White Raven certainly did not disappoint me…it just didn’t enrapture me as it would have live. Still, they end with ‘Helvegen’, of course – complete with fire and smoke for atmosphere – and it’s as beautiful and moving as ever.

First Flight of the White Raven is a success, as long as you judge it fairly. If you’re a Wardruna fan, and the band release this show for purchase (I was going to say on DVD, but now I’m showing my age), then you’ll want to buy it, if for nothing else than to study these unique compositions in the detail they deserve. For those who tuned in, it was Wardruna alive, bursting with energy and splendour, if not live with the full capacity for majesty that that experience entails. The white raven itself is prophetic, as Einar explained: a symbol of hope – and that’s something we all need now, more than ever.