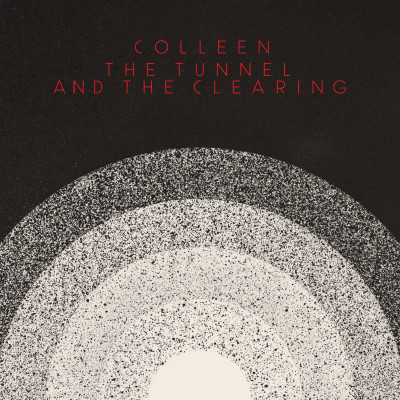 The Tunnel and the Clearing by Colleen

Remarkably Cécile Schott has now been making beautiful, intuitive, music as Colleen for twenty years. Her lovely records are experimental but always welcoming, her sound continually growing and changing. Schott’s fascination with exploring the technical possibilities of particular small set ups never seeming to clutter or obscure the emotional core of the music. On The Tunnel and the Clearing this sense of thought and feeling flowing directly into sound seems more apparent than ever. Deceptively simple and sparse it allows its sounds room to breathe and glow. While the album is deeply introspective in mood, the tracks echo and resound in an unknowable space filled with light.

On her last album (2017’s A Flame My Love, A Frequency) Schott, a little unexpectedly, went fully electronic leaving behind the looped acoustic instruments of her earlier work. The Tunnel and the Clearing continues along this path using a restricted palette of analog electronics with plenty of Space Echo and recording almost completely live. There’s a slight lo-fi DIY feel about the album as a result but none of the scrappy raw edges that might imply. The sound she draws out of her machines is very human, so connected it’s almost interior or telepathic. Her playing feels relaxed and organic, free to wander, almost improvisatory. Its sweet and seductive minimalism is sometimes so delicate it’s as if she hardly presses down on the keys at all.

Without the building blocks of loops everything now seems to float a little more loosely. The rhythms she uses here are brittle presets, not so much driving the tracks on but laying out a supporting grid for the gossamer melodies. ‘Gazing at Taurus – Night Sky Rhumba’ is like a woozy disco tune laying down in the park for a breather and staring up at the stars. ‘Gazing at Taurus – Saint Eulalia’ starts as almost a diary entry, muttered poetry and memory “Time has been dripping through my bones, in slow droplets of sadness”. It then spins out the musicality of the name Santa Eulalia into a dreamy mantra.

The lyric here matches the elegantly evocative music in its concision. Schott is in her new home Barcelona, watching as the heavens turn above the cathedral spire, she sings of wrapping herself in a blanket of stars to find her way through the tunnel of her trials. There’s no real sense of leaning on astrology or religion for guidance, more of locating yourself in relation to the universe, to the continuity of human history and faith. Barcelona isn’t short of spires but it’s worth noting that Santa Eulalia is one of the city’s patron saints, a teenage martyr horribly tortured in the kind of improbably grotesque ways Catholicism seems to relish.

This album took longer than planned to get here, for all the current reasons but also because Schott was knocked off course at first by illness and then the end of a long term relationship. The back story is pretty sad and pained then, not quite St Eulalia’s martyrdom, but you can see how it would resonate. The resulting music is anything but dark or bleak. It’s reflective and resilient, finding a path through the tunnel to the clearing. Despite its long gestation it’s not overworked, mostly feeling so light and spontaneous it seems almost instant. It’s a very healing record, full of calm acceptance. A reconciliation with the darkness “hidden in the current where all things flow” as the final track has it. Colleen makes it through to the clearing and radiates light and clarity, it’s a wonderful space to spend time in.