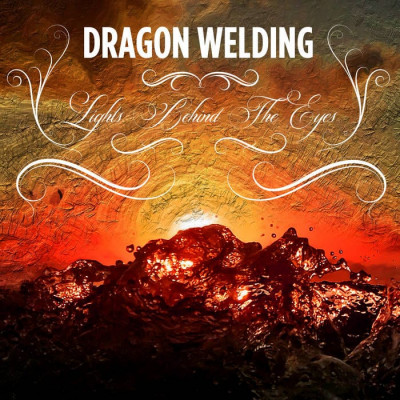 The Lights Behind The Eyes by Dragon Welding

What has been proven in the last year or so is artists and creativity will always find a way. While Dragon Welding – aka Wolfhounds guitarist Andy Golding should have been promoting last year’s excellent Electric Music album, instead saw him turn to one of his many side projects to creatively see him through these rather testing times. Unsurprisingly Dragon Welding is a solo project as the first lockdown enabled him to take stock of a backlog of ideas to complete Lights Behind the Eyes. While also completing a third album’s worth of tracks which will hopefully see a future release also on Damien O’Neil’s (The Undertones, That Petrol Emotion) Dimple Discs label.

Like his main band the Wolfhounds, Dragon Welding follows suit in that Andy Golding never looks back but continues to be a constantly forward vison of ideas. As Lights Behind The Eyes goes deeper into instrumental ambient guitar folk than the self-titled debut. Andy kindly sent me a Spotify playlist of tracks he was listening to during lockdown and the inspirations behind this album. It’s an eclectic mix of Van Der Graaf Generator, Matt Deighton, Cavern of Anti-Matter, XTC, Gong, Nico, Clinic, Paper Dollhouse plus others which indicate strongly all barriers will indeed be removed.

And so it proves, as his quest to ‘’make music you can relax to while keeping your guard up’’ is full of intricate and delicate guitar play expertly laced with electronic manipulation that is fluid and rich of ideas across the seven tracks. The opening title track is a gorgeous stunning layered mix of electric and acoustic guitar that precisely achieves perfect serenity while your ears and mind are enjoyably pricked up on full alert.

The appropriately titled ‘Liquid’ is another fine example for laying on the couch and let the subtle background guitar drone float in for effective dream-drifting caressing. Along with the blow the cobwebs away explosion of ‘Scorched Sea’ and its reminder of Andy’s love of simply playing the guitar loud, and the eight minutes’ album closer ‘Paralevolution’, all the electric guitar parts were done in one take shots.

After the big burst of ‘Scorched Sea’ it returns to the finger picking acoustic warmth of ‘Own Goal’, the absorbing multi-layered ‘On’ and the soothing under the covers warm fuzzy guitars drone of ‘Paralevolution’, which all turn out to be the album’s slow burners and pure class highlights. By this point your so finely tuned into this parallel universe Andy has created it’s hard to get back to the mundanity of things like putting the bins out or getting the dinner started.

Yes, this is one of those album’s for being in the right mood but isn’t all music about going a particular-way you fancy at any specific time. Lights Behind The Eyes perfectly hits that spot for wide awake relaxation, which encourages escapism, reflection, and achieves a heightened sonic aural tickling of the senses. It is also another opportunity for being allowed into the mind of one of the most underrated and overlooked guitarists from the original Indie scene, proving once again creativity lives long inside true artists.