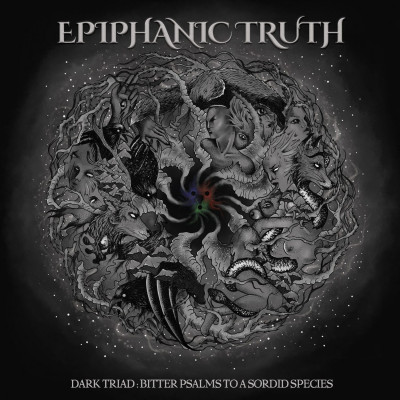 Epiphanic Truth are an anonymous collective – aside from seasoned session drummer Wilfred Ho – newly signed to Church Road Records for this, their first album. Although their music is broadly metal, that tag doesn’t cover the half of it. We start with a blast of intense, Ulcerate-esque death metal, but quickly segue into far more progressive territory, with psychedelia, jazz and prog, all pulled together with a critical appraisal of modern humanity and its failings. “The album is a conceptual Triptych, hinged together by the dark triad of personality disorders – psychopathy, narcissism and Machiavellianism. Each point converging over the political future of civilizations enthralled by Social Media” says their press release. This, the overall mood of the record and the themes hinted at by the three song titles, including ‘Our Vile Roots Flourish Beyond Light’ and ‘An Inescapable Verdict’, belie a loathing of the trajectory of our society, the obsession with our own online images and the peddling of lies by powerful organisations. This brought to mind the sombre spoken message at the opening of Garganjua’s phenomenal 2020 release Toward The Sun, questioning our perception of the present moment in light living constantly online.

But enough of the concept. This is what you need to know: this album absolutely slays. That’s the headline: this is the most far-reaching, absorbing and bombastically heavy album you will hear this year. As I mentioned, opener of the triptych ‘The Truth Of The Beast’ hits you in the face like a hammer, with frantic riffs, blastbeats and massive growled vocals. It does bring to mind recent releases by Ulcerate and Inter Arma, both bands who do the death metal thing in a progressive, utterly forward-looking and terrifyingly direct way. No nod to the old school here.

After the first few minutes of barrelling assault on our senses, more melodic elements creep in like (some) harmonious vocals, slower-tempo riffing and a doomy stomp. The feeling of imminent apocalypse still pervades (and never really leaves) but the music broadens out considerably. The spaces start open up between the music more and more after that, which to me makes the whole thing an interesting listen. ‘The Truth…’ spends its latter half with wistful atmospherics and far-off jazz notes before bringing us back to the present with a thud on ‘An Inescapable Verdict’, which starts its 11-plus minutes with an insidious riff and threatening, robotic-sounding vocals. There’s some thunderous bass work and innovative drum fills interspersed at times by that riff and tortured vocals forecasting our impending doom. It fills the length of the song fantastically, creating a mesmeric soundscape that just keeps going, building towards a crescendo at the end.

Final track of the three, ‘Our Vile Roots Flourish Beyond Light’ uses the same skill and musical variety to create a track that is at times soaring, at times pummelling metal, and many points in between, including both clean and harsh vocals. Occasionally it resembles a metal/70s’ prog jam session, filling as it does 22 minutes, but it holds the interest throughout.

On paper the concept of Dark Triad: Bitter Psalms To A Sordid Species may read like an experiment that could fall flat on its face in execution, but it’s all played with such conviction and skill that this debut holds together very well. Musically a mixed bag (in terms of styles rather than quality), and if you like your metal to come in straight lines then this album may not be for you. But if, like me, you are drawn to records like this precisely because it isn’t all heads-down, one-speed heaviness, then do yourself a favour and have yourself a bit of the Epiphanic Truth.